On 25 January 2019, the tailings dam at the Córrego do Feijão iron ore mine near Brumadinho, Brazil, failed catastrophically, unleashing a giant morass of toxic mud downstream (Fig. 1). The wave of sludge killed 237 people, making the event one of the deadliest tailings dam disasters in history [1,2]. 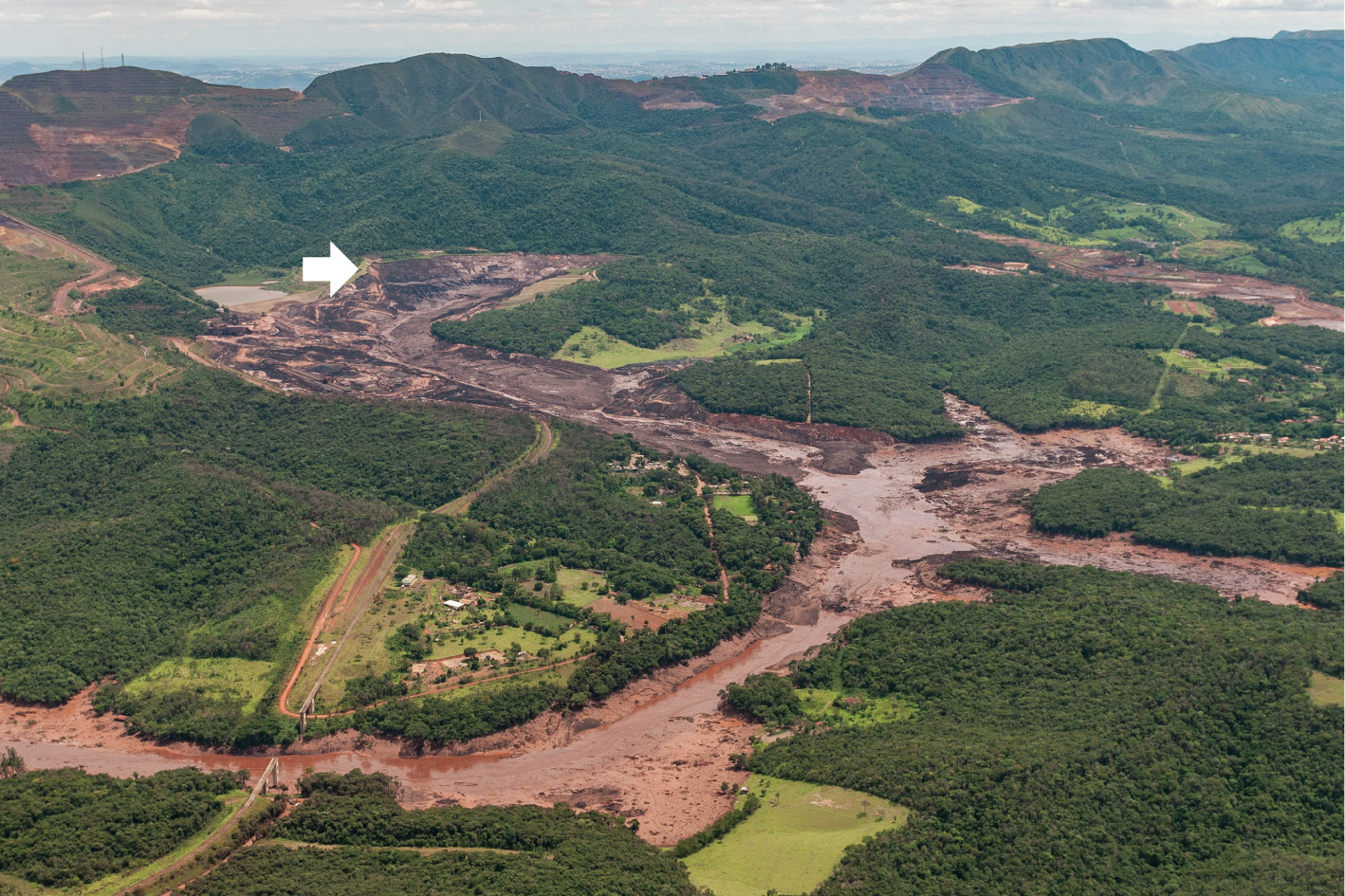 Fig. 1. In one of the deadliest tailings dam disasters in history, the 25 January 2019 collapse of the tailings dam (arrow) at the Córrego do Feijão iron ore mine near Brumadinho, Brazil, sent a wave of toxic mud downstream, killing 237 people and destroying 269.84 hm2 of land. Credit: Vinícius Mendonça/Ibama (CC-BY-SA-2.0).

Tailings are the wet waste produced during mining operations and the dams constrain reservoirs of this finely ground, and often toxic, debris. The most common type of tailings dams—known as ‘‘upstream” dams—are simply piles of thick sludge that are built higher and higher as the waste accumulates. The upstream dam at the Córrego do Feijão mine, owned and operated by the mining company Vale, stood at 87 m high and impounded almost 1.3 × 107 m3 of waste [3].

Tailings dams have proved particularly prone to failure [4]. When Shahid Azam, a professor of environmental systems engineering at the University of Regina, Canada, and Qiren Li, an environmental engineer at Clifton Associates, Ltd. (Regina, Canada) conducted an extensive study of tailings dam failures in the previous 100 years in 2010 [4], they found that, during this period, more than 1 in 100 tailings dams (at 1.2% of the world’s 18 401 tailings mine sites) have collapsed. In contrast, the failure rate of conventional water retention dams is 1 in 10 000.

Multiple factors can contribute to tailings dam failures. The contents can leak out slowly, earthquakes can rock the dam and its foundations, and filling the reservoir too quickly can lead to overtopping and problematic maintenance, resulting in a build-up of excess water. Sound engineering design is not enough; analysis of case histories has pointed to poor management and operational strategies as also being factors that can lead to dam failure [5]. Following the Brumadinho dam disaster, the Brazilian authorities banned upstream dams in the country and have embarked on an investigation to determine why the dam had failed, only months after it had been declared safe [5]. It has been reported that complaints by company employees of unsafe conditions went unheeded in the months prior to the failure [6].

Besides resulting in an estimated $4.8 billion USD of losses for Vale and forced resignations in March of its chief executive and several other executives [7], the catastrophe prompted a call-toaction in the global mining community. In April, the International Council on Mining and Metals (ICMM), Principles for Responsible Investment (PRI), and the United Nations Environment Programme (UNEP) launched an independent review of mine tailings storage facilities around the world [8]. The goal of the review is to establish an international standard for the safe design and management of tailings storage facilities that can be applied to all tailings dams, independent of where they are or who operates them.

‘‘The new standard that the review agrees to will be mandatory for ICMM members and adopted at all their operational assets globally,” said Tom Butler, ICMM Chief Executive Officer. ‘‘I hope non-members will sign up to the standard, too.”

Design, operation, and maintenance issues aside, the Brumadinho disaster has also raised awareness among mining engineers about ongoing impacts of climate change, which can result in more intense rainfall [9]. With abnormally excessive rains, tailings dam reservoirs, which are for the most part solid, can liquefy if drainage is not adequate. This process, termed liquefaction, increases the pressure on sodden and saturated dam walls and the risk that they will weaken and collapse. In their 2010 study, Azam and Li [4] identified unusually heavy rainfall as a frequent causative factor in a close examination of 218 dam failures. In addition, involvement of excessive rainfall increased over time: Before 2000, it was associated with 25% of the failures; after 2000, the frequency rose to 40% [4].

‘‘There’s undoubtedly an issue related to more volatile rainfall,” Butler said. ‘‘People might be designing these dams for one-in5000-year events, but you keep hearing about how one-in-5000- year events are now happening once every 10 years.”

And while tailings dams are likely to be impacted, extreme weather events associated with climate change can cause other infrastructure, such as drainage systems, transportation networks, and buildings, to fail to operate as designed, potentially resulting in injuries, deaths, and extensive and expensive damage.

‘‘There is a sense of urgency—in the United States alone we put in the ground 1.3 trillion dollars’ worth of infrastructure a year,” said Bilal Ayyub, professor of civil and environmental engineering and director of the Center for Technology and Systems Management at the University of Maryland. ‘‘And I can assure you that the majority of what is built is not designed to account for a changing climate.”

Concerns about the potential impacts of climate change led to the formation of the American Society of Civil Engineers (ASCE) Committee on Adaptation to a Changing Climate (CACC) in 2011. The Committee, of which Ayyub is a founding member and past chair, focuses on establishing new practices to help civil engineers account for projected climate change-related changes in temperatures, rainfall, storm intensity, and sea level rise.

The changes can cause damage in multiple ways. In coastal areas all over the world, for example, most infrastructure is located near the coast. Rising sea levels produce larger surges and bigger waves when storms occur and these can flood buildings and transport systems and overwhelm drainage systems that were not designed to handle the increased influx of water [10]. Ayyub, who holds an honorary two-year chair professorship at Tongji University in Shanghai, China, is currently investigating the potential impact of higher water levels on the Shanghai Metro system.

Ayyub also served as the editor of Climate-Resilient Infrastructure: Adaptive Design and Risk Management, a 2018 manual produced by the CACC that lays out a basis for the development of standards and guidelines for the concept of ‘‘adaptive design” and risk management [11]. The manual starts an ASCE process to create a standard—subject to American National Standards Institute requirements—for sustainable infrastructure that addresses climate-related hazards. Depending on the extent of the debate needed by stakeholders to reach consensus, this work could take from months to years to complete, Ayyub said.

When an engineer plans a new project that will potentially have a lifespan of 100 years, they base their design decisions on current estimates of climate change. But those estimates will likely fluctuate with changes in greenhouse gas emissions related to factors including global population and energy use, with projected impacts that will also vary. The CACC manual recommends that engineers should revisit a project every few years to check if the assumptions underlying the design still apply. ‘‘Projects should have features built in so that they don’t need to be demolished if they need to be enhanced, so we can add or expand in a manner that utilizes what was initially put in the ground,” Ayyub said.

While the Brumadinho catastrophe can hardly be excused because it ‘‘rained too hard,” the need to account for climate change in engineering design and maintenance cannot be dismissed either. Continuous monitoring becomes increasingly important, particularly for more dynamic—and likely more hazardous—infrastructure like tailings dams. ‘‘It is always important to know if there is anything that is about to happen which could jeopardize peoples’ lives,” Butler said.