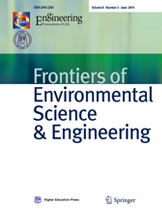 The water quality in a typical urban river segment originated with reclaimed water in Beijing was monitored for two years to investigate the evolution of water quality along the river, and statistical analysis was applied to determine factors influencing water quality of such river recharged by reclaimed water. It was found that no significant change in pollutant concentrations (including COD, NH -N, TN and TP) was observed during this time, and their average values were close to those of the original reclaimed water. However, turbidity and algal contents fluctuated temporally in the direction of river flow. Statistical analysis showed that turbidity was strongly positively correlated with algal contents for flow rate<0.1 m·s , whereas it was strongly positively correlated with both algal contents and TOC for flow rate>0.1 m·s . It was observed that diatom was the absolute predominant phyla with as the major species. In terms of algal bloom control, the specific growth rate of algae was strongly correlated to temperature, and was influenced by flow rate as well. Compared with two other rivers originated with reclaimed water and one originated with natural water, the Shannon–Wiener index in the objective river was the lowest, with values between 0.7 and 1.6, indicating a high risk for algal bloom. Statistics showed that Shannon–Wiener index was strongly negatively correlated to nutrient salts and cations.