The world’s longest and deepest tunnel, the 57.1 km long Gotthard Base Tunnel, was officially opened on June 1, 2016 after 20 years of effort [1,2], as shown in Fig. 1 [3,4]. The tunnel, actually twin tubes, under the Gotthard Massif of the Swiss Alps connects Erstfeld in the north to Bodio in the south, effectively connecting northern and southern Europe with a high speed-high capacity freight and passenger rail link. The tunnel will allow rapid train transport and have a positive environmental impact by supplanting the equivalent capacity of 1 million trucks per year. At its deepest point, the tunnel runs 2.3 km under the Alps.

The tunnel was entirely financed by the citizens of Switzerland and approved in a referendum in 1992. It cost $12 billion USD. It is expected that about 260 freight trains and 65 passenger trains will travel the tunnel every day in transit times of about 20 min at a top speed of 250 km·h−1 for passenger trains [5]. Passengers chosen by lottery and dignitaries traveled through the tunnel at its opening. At present, rail tests continue in anticipation of the tunnel being open for full public service in December 2016. The passenger travel time between Zurich and Milan will then be about 3 h, down from the present time of slightly more than 4 h [5]. The electrified train operates at 15 kV, 16.7 Hz.

Japan’s 53.9 km Seikan Tunnel is now the second longest in the world and the 50.5 km Channel Tunnel between the UK and France is the third. While impressive, it is not the length of the tunnel, per se, that is so important, but the function. The Alps are a natural trade barrier in Europe and merchants and nations have struggled to move goods across them since Roman times. In winter, transit over the passes was not possible. A major breakthrough occurred in 1882 when the first Gotthard Tunnel was built for trains. The tunnel was shorter but at higher elevation, so one had to weave up the mountain to reach it. In 1980, a tunnel was built for road traffic, but both of these tunnels were at maximum capacity at the end of the 20th century. The new Gotthard Tunnel is nearly flat and straight and supplants them both for long distance freight. Elevation [5] at the north portal is 460 m and at the south portal is 312 m. 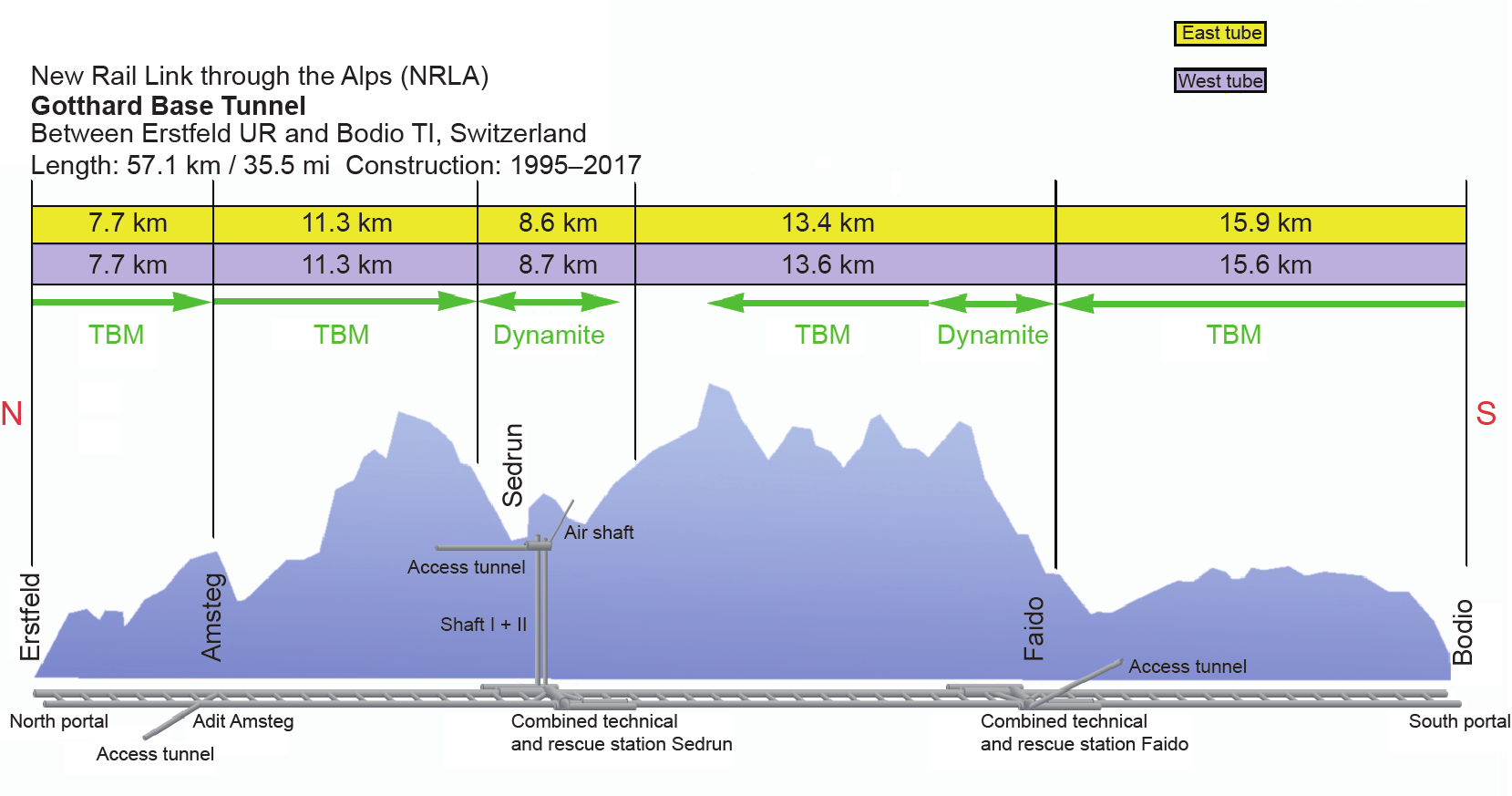 Safety of operation is a key issue for such a long tunnel [5]. The first safety element is the twin single-track tube construction. The two tubes are connected every 325 m by cross passages to allow rapid evacuation from one tube to the other if necessary. At the one-third points at Faido and Sedrun, there are emergency stop stations in each tube connected to the other tube by six tunnels. Fans provide fresh air at the emergency stations and hot fumes are sucked out through extraction openings. Positive pressure ensures that the air remains free of smoke.

Construction of the tunnel was a massive engineering feat. Four Herrenknecht Gripper tunnel boring machines were used, two on each tube, to drill from the north and south ends. Four access tunnels were built so construction could begin simultaneously at Erstfeld, Amsteg, Sedrun, and Faido (Fig. 1). A fifth at Bodio was added later. The rock was variable, sometimes requiring very slow going when it was soft, but under optimum conditions the huge 10 m diameter, 400 m long tunnel boring machines could travel 40 m a day, a record. Alp Transit Gotthard AG, the tunnel constructor, broke through the east tube on October 15, 2010 and the west tube on March 23, 2011. Twenty-six hundred workers were employed during the construction of the tubes, nine of whom lost their lives, a sad indication of the danger and difficulty of this engineering feat.

The boring machines themselves are an engineering marvel. The boring head presses against the tunnel face with a force of 26 t (2.55 × 105  N). Crushed rock from the boring head is captured in buckets on the head and drops through the head where it is moved by conveyer to the rear of the machine. Two drills create multiple holes as much as 4 m deep for steel anchor bolts near the boring head. As the head moves forward, reinforcing support of steel mesh or steel or concrete rings is fitted together behind it by massive manipulators to form a continuous tube to support the bored rock. Some of the 2.83 × 107  t of rock excavated and transported away from the drilling heads was further crushed and used to make concrete arcs for ring segments in the reinforcing tube. Animation for the operation of the boring machine is shown in Ref. [6].