Green Production Technology of the Monomer of Nylon-6: Caprolactam

After two decades’ endeavor, the Research Institute of Petroleum Processing (RIPP) has successfully developed a green caprolactam (CPL) production technology. This technology is based on the integration of titanium silicate (TS)-1 zeolite with the slurry-bed reactor for the ammoximation of cyclohexanone, the integration of silicalite-1 zeolite with the moving-bed reactor for the gas-phase rearrangement of cyclohexanone oxime, and the integration of an amorphous nickel (Ni) catalyst with the magnetically stabilized bed reactor for the purification of caprolactam. The world’s first industrial plant based on this green CPL production technology has been built and possesses a capacity of 200 kt·a−1. Compared with existing technologies, the plant investment is pronouncedly reduced, and the nitrogen (N) atom utilization is drastically improved. The waste emission is reduced significantly; for example, no ammonium sulfate byproduct is produced. As a result, the price difference between CPL and benzene drops. In 2015, the capacity of the green CPL production technology reached 3 × 106 t·a−1, making China the world’s largest CPL producer, with a global market share exceeding 50%.

In the future, sustainable development of the chemical industry must be built on a foundation of green chemistry and green engineering, and the general concept must change from one of polluting first and treating later, to one of eliminating pollution at the source. The criteria of green chemistry are: to achieve overall atom economy of a reaction—that is, every atom of the source materials enters into the product, thus producing no waste or byproducts—and to avoid the use of toxic or harmful raw materials, catalysts, or solvents. In brief, the target of green chemistry is to produce chemicals in a clean manner that does not pollute the environment at any point in the entire life cycle.

Caprolactam (CPL), as the monomer for nylon-6 fiber and engineering plastics, is an important basic organic chemical that is widely used in textile, automobile, electronics, and other industries. In 2015, CPL consumption amounted to about 3 × 106 t in China and about 6 × 106  t around the world [1]. Two decades ago, CPL consumption in China relied almost completely on importation; therefore, China Petrochemical Corporation (Sinopec) invested 9 billion CNY to introduce three CPL production plants with a total capacity of 150 kt·a−1. However, commercial CPL production technology has disadvantages such as low production capacity, high investment and production cost, and high waste emission, which are far from the criteria of green chemistry; thus, CPL production demands process improvement. This review outlines the green CPL production technology that was developed by the Research Institute of Petroleum Processing (RIPP) in recent years.

《3.1. Integration of TS-1 zeolite with a slurry-bed reactor for the ammoximation of cyclohexanone》

3.1. Integration of TS-1 zeolite with a slurry-bed reactor for the ammoximation of cyclohexanone

In the 1980s, EniChem Company developed TS-1 zeolite to catalyze the one-pot reaction of cyclohexanone, ammonia, and hydrogen peroxide to produce cyclohexanone oxime, as shown in Table 1, with an impressive selectivity. The advantages of this reaction are its highly simplified process, mild reaction conditions, and high atom economy, with water being the only byproduct. Subsequently, a 12 kt·a−1 industrial demonstration was accomplished in 1995. The technology employed spherical catalysts with a diameter of 20 μm and tanks-in-series slurry-bed reactors. The cyclohexanone conversion was no less than 99.9%, the cyclohexanone oxime selectivity was no less than 99.3%, and the hydrogen peroxide utilization was around 90%. Based on this technology, Sumitomo Chemical Co., Ltd. built a 65 kt·a-1 CPL production plant in 2003.

During the same period, RIPP developed a cyclohexanone ammoximation technology by integrating micro-sized hollow TS-1 zeolite with a slurry-bed reactor fitted with a membrane separation component. Fig. 1 provides a schematic diagram of the ammoximation of cyclohexanone based on this technology. RIPP began its investigation of this new technology in 1995 and achieved commercialization success in 2003. 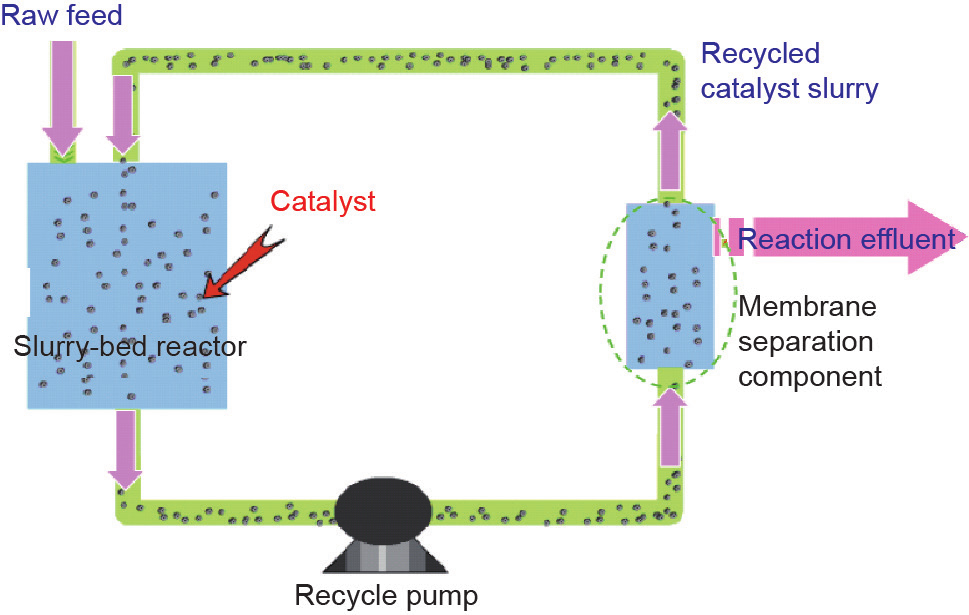 Fig. 1. Schematic diagram of the ammoximation of cyclohexanone.

The cyclohexanone ammoximation technology developed by RIPP has two highlights. The first is the use of the micro-sized hollow TS-1 zeolite as the catalyst and the integration of a membrane separation component into the slurry-bed reactor. Directly synthesizing the micro-sized hollow TS-1 zeolite as the catalyst not only removes the need for the catalyst-forming process, but also enables a more effective utilization of the active centers. Moreover, with the aid of the membrane separation component, the micro-sized hollow TS-1 zeolite can be uninterruptedly separated and recycled. The second highlight is the improvement in controlling catalyst loss and in catalyst regeneration. It is known that silicon (Si) tends to dissolve from the TS-1 zeolite because the ammoximation of cyclohexanone is an alkalescent system. The loss of Si reduces the activity of the catalyst. The dissolved Si also blocks the separation membrane. Therefore, controlling the loss of Si is the key to the stable, safe, and long-term operation of the production plant. The new technology effectively suppresses the loss of Si based on a proprietary method and thus prolongs the lifetime of the catalyst. At the same time, it improves the catalyst renewability and reduces catalyst consumption [3,4]. For the cyclohexanone ammoximation technology developed by RIPP, the cyclohexanone conversion was more than 99.9%, the cyclohexanone oxime selectivity was more than 99.3%, and the hydrogen peroxide and ammonia utilization was around 90% and 100%,  respectively.

Compared with the existing technology, the new technology of integrating micro-sized hollow TS-1 zeolite with a slurry-bed reactor fitted with a membrane separation component markedly simplifies the cyclohexanone ammoximation process. Moreover, it improves the utilization of N from 60% to nearly 100%, decreases the plant investment by more than 70%, eliminates the production or use of corrosive NOx, and discharges almost no waste. As a result, the production cost of cyclohexanone oxime is reduced by 800 CNY·t−1. Fig. 2 shows the 200 kt·a−1 cyclohexanone oxime industrial production unit that was established based on this technology. 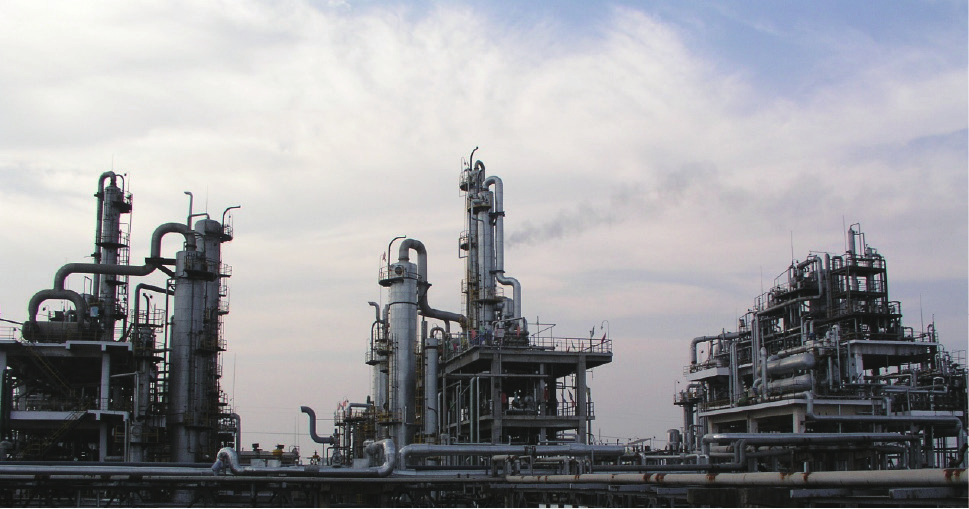 《3.2. Integration of silicalite-1 zeolite with a moving-bed reactor for the gas-phase Beckmann rearrangement of cyclohexanone oxime to CPL》

3.2. Integration of silicalite-1 zeolite with a moving-bed reactor for the gas-phase Beckmann rearrangement of cyclohexanone oxime to CPL 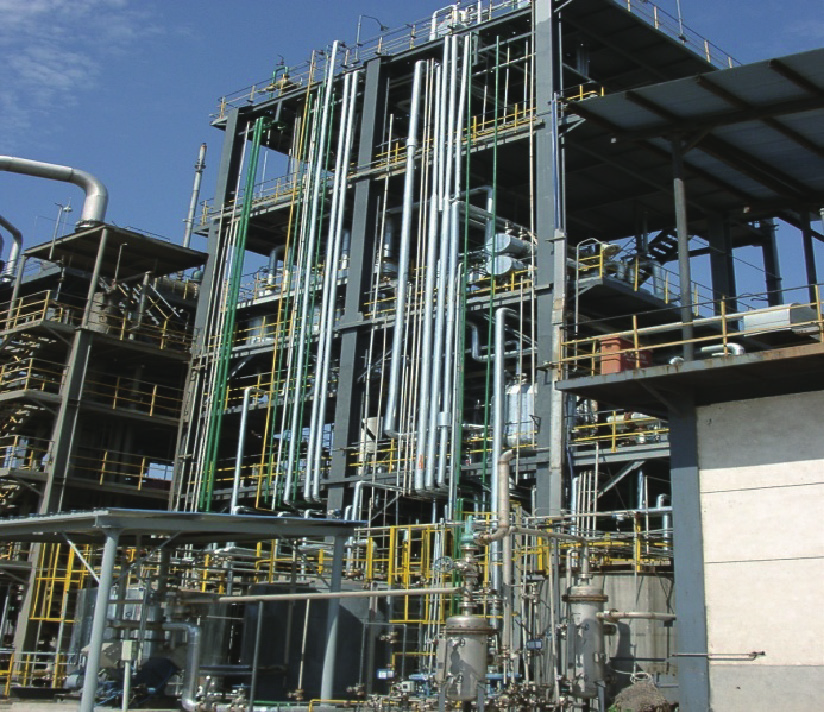 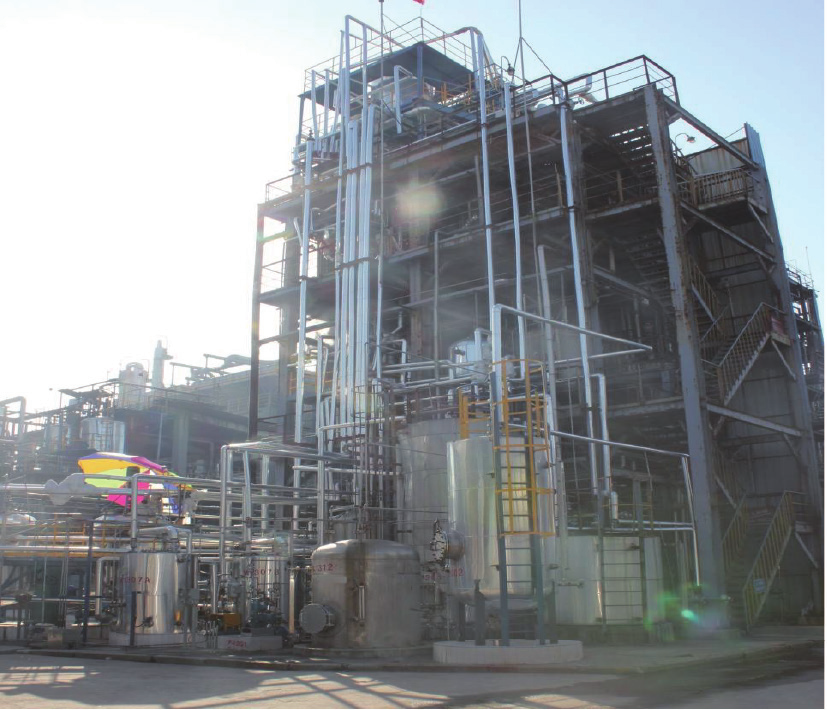 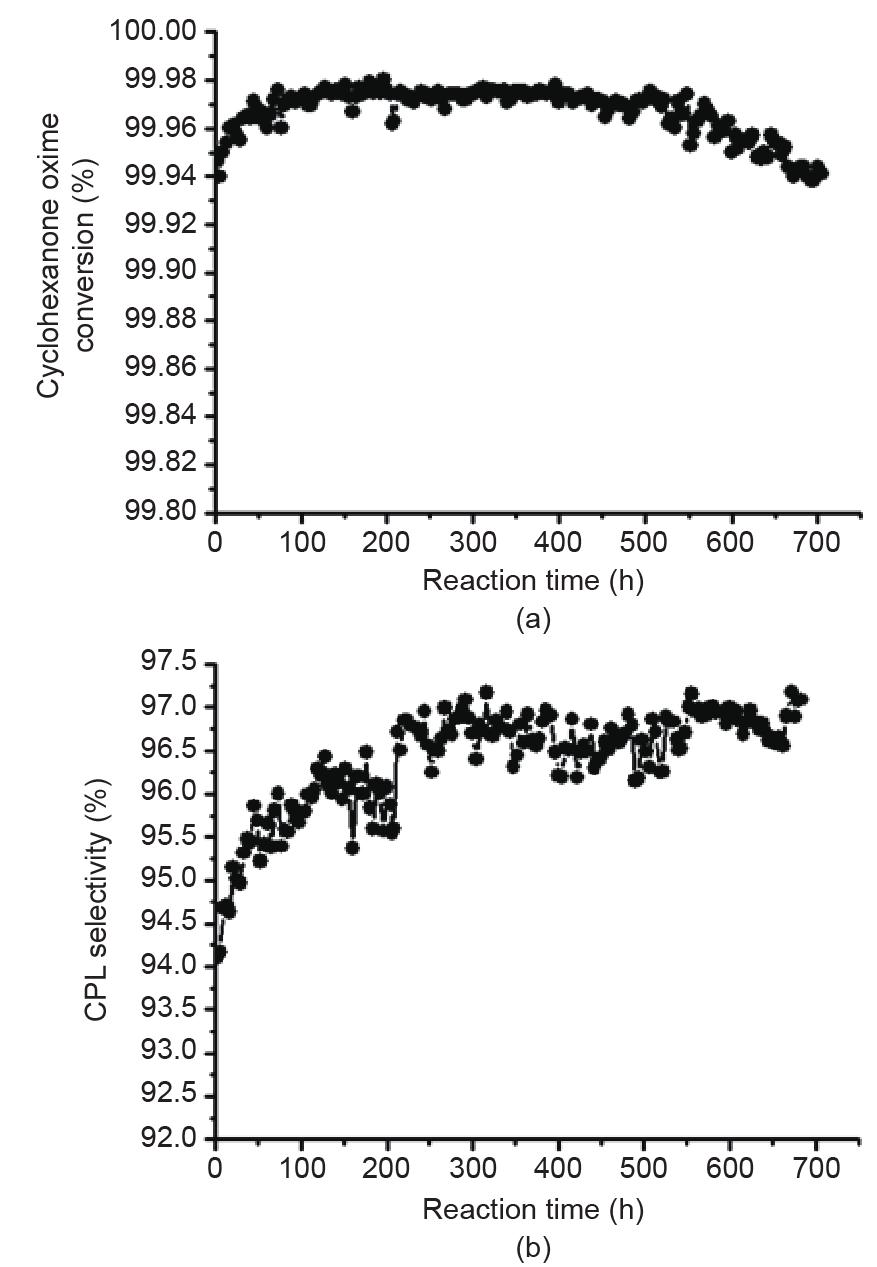 《3.3. Integration of amorphous Ni catalyst with a magnetically stabilized bed for hydrofining CPL》

3.3. Integration of amorphous Ni catalyst with a magnetically stabilized bed for hydrofining CPL

As mentioned above, the purity standard of CPL is the most stringent out of all the basic organic chemicals. The impurity content in CPL should be less than 5 μg·g–1  in order to ensure the desired pigmenting and spinning properties. However, the impurities bear physical and chemical properties that are similar to those of CPL, and cannot be removed through extraction or distillation. The existing production technology uses a Raney Ni catalyst and tank reactor for the hydrofining of CPL in order to extend the boiling point gap between the impurities and CPL, followed by removal of the impurities by distillation. The process for this hydrofining technology is complex, its catalyst consumption is high, its hydrogenation efficiency is low, and the catalyst must be separated from CPL by filtration. We found that replacing the Raney Ni catalyst with an amorphous Ni catalyst significantly enhances the hydrogenation activity. Integrating an amorphous Ni catalyst with the magnetically stabilized bed reactor intensifies the CPL purification process, improves the quality of CPL, increases the CPL yield, and favorably reduces the operation cost.

An amorphous alloy has a unique structure that features shortrange order and long-range disorder; thus, the alloy exhibits excellent electromagnetic, mechanical, and wear-resisting performance. However, an amorphous alloy is non-equilibrium metastable in thermodynamics. Its poor thermal stability and small specific surface area severely limit its application in catalytic reactions. We introduced large-radius rare-earth atoms into amorphous Ni to retard the migration of the Ni atoms, thus elevating the crystallization temperature by 160 °C. We also developed a pore-creating method by adding aluminum (Al) first, and then leaching it out with alkali, thus improving the specific surface area by two orders of magnitude. Various additives can easily be introduced to the amorphous alloy to meet the requirements of different types of hydrogenation reactions, including the hydrofining of CPL [7]. The magnetism of an amorphous Ni alloy favorably satisfies the requirements of the solid catalysts demanded by the magnetically stabilized bed reactor. The magnetically stabilized bed reactor facilitates a high-speed operation because the external magnetic field can effectively prevent fine particles from leaving the reactor. Therefore, integrating an amorphous Ni catalyst with the magnetically stabilized bed reactor for the hydrofining of CPL takes full advantage of this new catalytic material and this new type of reactor [8].

We also systematically studied the influence of the cooling speed of amorphous Ni and iron (Fe) alloys on their catalytic performances. We discovered that the scientific key to a good catalytic performance of an amorphous alloy lies in the fact that quenching reduces the coordination number and changes the distance between the metal atoms [9]. Therefore, we devised a new strategy for finely regulating the catalytic performance of the metal catalysts [10–12]. Amorphous metal alloy catalysts also  exhibited  excellent  activity and selectivity in benzene partial hydrogenation [13], methanation [14], biomass conversion [15,16], and so on. 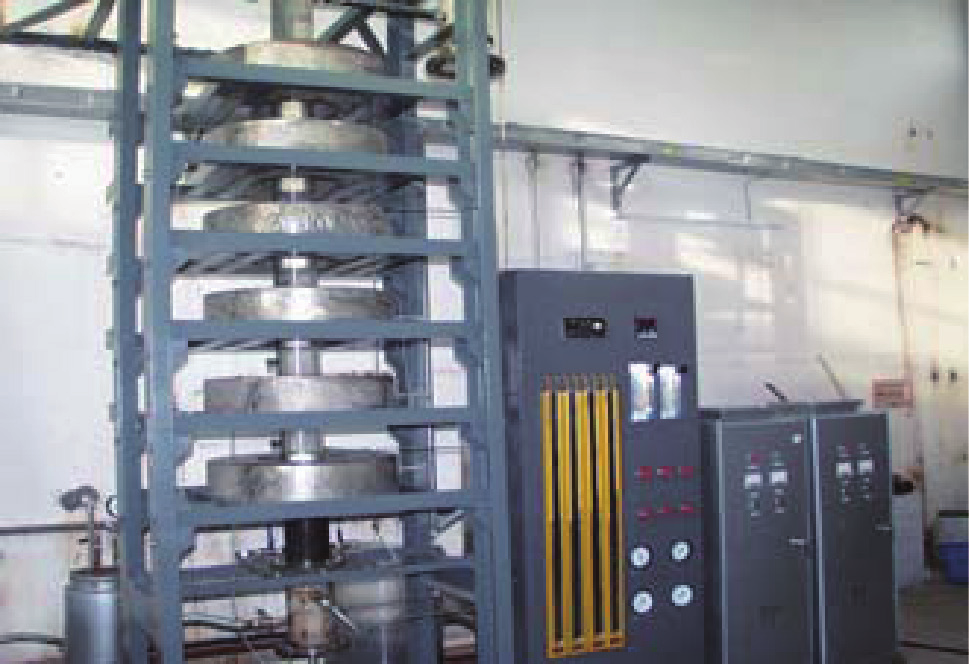 In 2001, Sinopec Baling Company established a 6 kt·a−1  CPL hydrofining demonstration unit (Fig. 7). The results showed that the PM value of the 30% CPL aqueous solution increased from 40–60 s to 2000–4000 s after hydrofining using the magnetically stabilized bed reactor. In addition, the hydrogenation result was significantly better than that of the existing industrial stirred-tank process, with the PM value increasing to 200–400 s after hydrofining. The conditions for the hydrofining of CPL on the magnetically stabilized bed reactor are as follows: temperature of 80–100 °C, pressure of 0.4–0.9 MPa, space velocity of 30–50 h−1, and magnetic field strength of15–35 kA·m−1. The lifetime of the amorphous alloy catalyst reached 3500 h [8]. 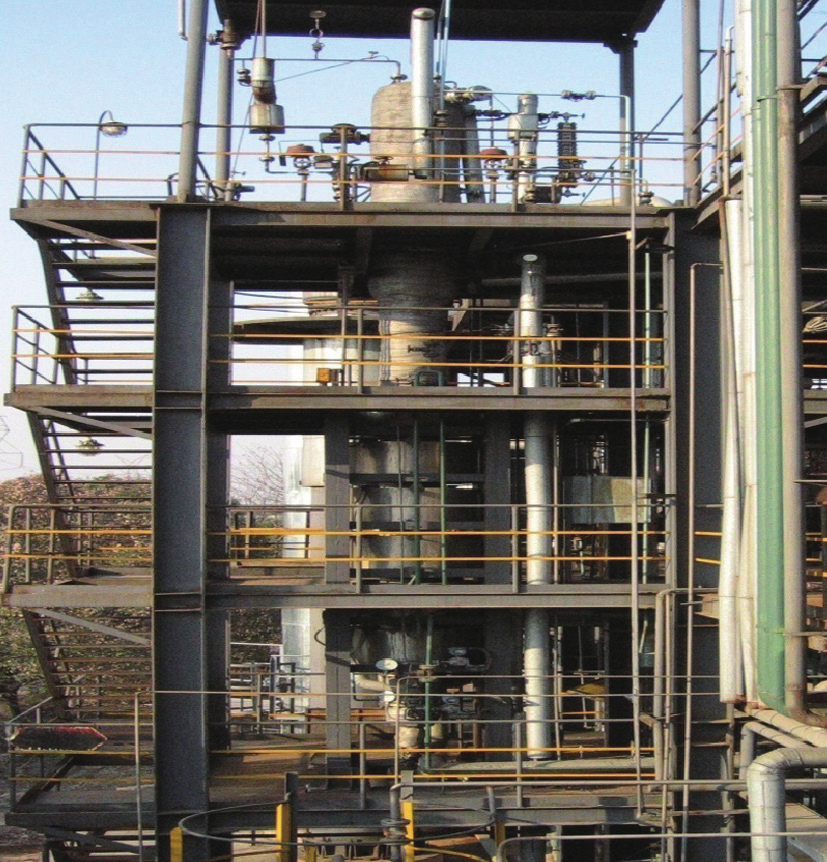 To extend the application of the magnetically stabilized bed reactor, we designed and synthesized a series of iron-based magnetic catalysts, which showed excellent catalytic performance in the FischerTropsch synthesis reaction [18–24]. We also synthesized magnetic resins with embedded nano-sized iron oxides as the magnetic cores, with which a magnetic palladium catalyst and a magnetic solid-acid catalyst were fabricated. On the magnetic stabilized bed reactor, these magnetic catalysts were highly effective for hydrofining [25], impurity removal from ethylene [26], oligomerization of light olefins [27], and etherification of  fluid catalytic cracking (FCC) light gasoline [28]. A magnetic separator was also designed and used in the Fischer-Tropsch synthesis process, and a process package of industrial equipment with a capacity of millions of tons per year has been designed.

3.3.3. Industrial application of the magnetically stabilized bed for CPL hydrofining 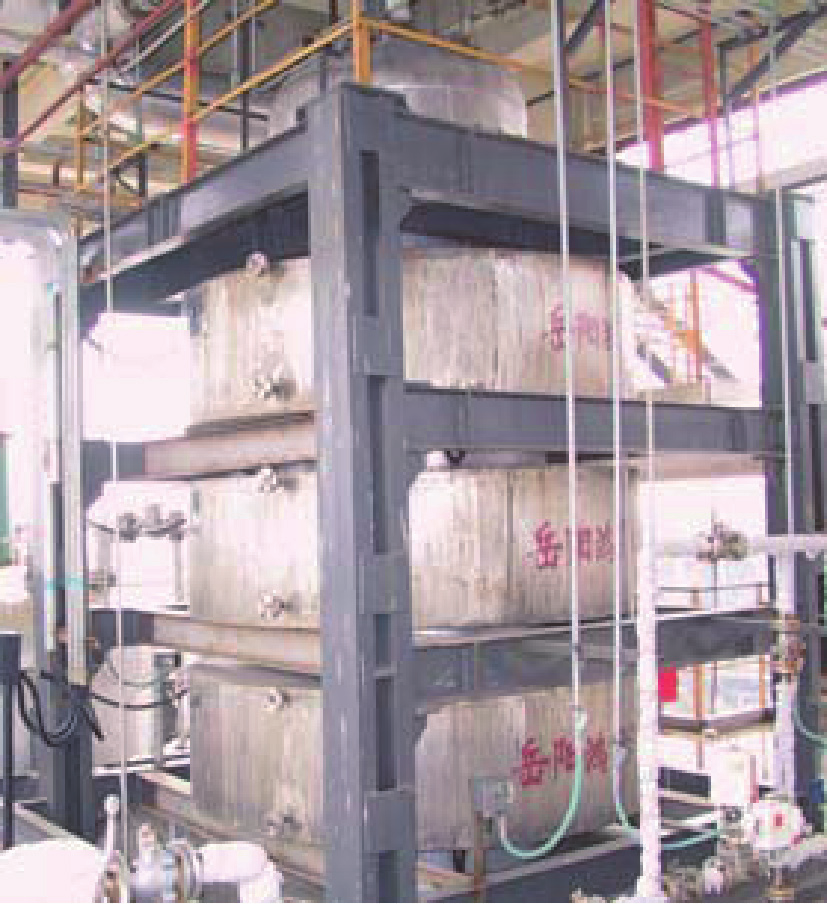 Table 2 Comparison between magnetically stabilized bed and tank reactors for the purification of CPL. 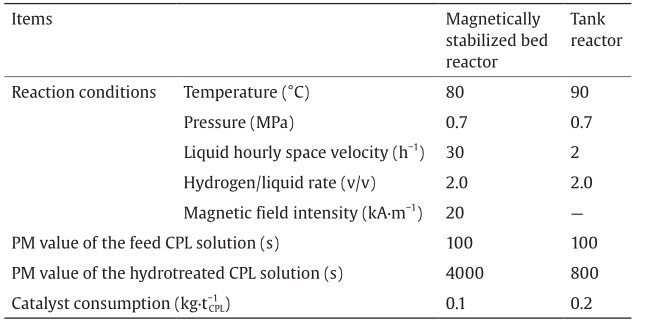 After two decades’ endeavor, RIPP successfully developed a green production technology for CPL, the monomer of nylon-6, by integrating new catalytic materials, new chemical engineering, and new reaction pathways. This technology greatly simplifies the CPL production process. As a result, plant investment is reduced by 70% and the utilization of N is increased from less than 60% to nearly 100%. The waste emission of this technology is close to zero, with no byproduct production of ammonium sulfate. Hence, the price difference between CPL and benzene drops from 20 000 CNY·t−1 to 5000 CNY·t−1. The world’s first industrial plant using this technology was built, with a capacity of 200 kt·a−1. In 2015, China’s CPL capacity based on this green production technology reached 3 × 106 t·a−1, giving China a global market share that exceeds 50%, and making it the world’s largest CPL producer—a huge leap from China’s original position of relying almost totally on CPL importation. This green CPL production technology forms a foundation for new industries with an output of 50 billion CNY, thus not only producing great economic and social benefits, but also setting a good example of green chemical engineering.

This work was supported by the National Basic Research Program of China (2012CB224806).