Calculation of the Behavior Utility of a Network System: Conception and Principle

To achieve precise evaluation of a system or project, it is vitally important to establish a quantitative evaluation index system and a corresponding accurate metric value. Utility is a fundamental metric indicator for characterizing the performance of systems or projects, and is widely used in various kinds of assessment for systems or projects at different levels. In normal physical systems, utility is an "energy” characteristic, which can be computed comprehensively by applying physical principles and parameters. However, it is difficult to characterize the utility of systems that are established on logical association, behavioral evolution, and reasoning [1]. In general, the assessment of such systems is currently limited to rough comparative calculations [2].

《1.1. Behavior utility is a descriptive form of system functions》

1.1. Behavior utility is a descriptive form of system functions

Behaviors [3] are usually interpreted as mannerisms that are manifested and controlled by thoughts, whose existence relies on specific scenarios. Behavior [4] is a kind of action that causes an object to change its present state under rational drives. Locomotory movements of the components of the scenery from one state to another result from the behavioral action. The action of compound behaviors and the resulting locomotory movements comprise behavior utility.

Suppose that various types of objects in a network form a nonempty set A, and that A satisfies the following constraints:

• A contains at least two different elements; and

• The elements in A are interrelated in a certain way.

is the m-dimensional vector space. The mapping maps any pair of ordered points p, q in A to a vector

, which satisfies the following conditions:

Suppose a network scenario is an m-dimensional smooth differential manifold M; we can then build a differential geometry description for scenarios, states, and utilities in the network space, as shown in Fig. 1.

Thus, we can give a basic definition and a mathematical description of network behavior, behavior path, and behavior utility based on the differential manifold.

Definition 2.1: Behavior refers to a homeomorphic transformation from one covering to another in the differentiable manifold of the scenario.

Suppose φ: M→M is a smooth homeomorphic mapping of smooth manifold M to itself; then φ is called a behavior of M. A behavior from a ∈ M to b∈M establishes a path space ΩM(a,b):

The homeomorphic transformation from a∈M to b∈M forms a segmented smooth directional curve connecting a; b∈M in the path space ΩM(a,b), as shown in Fig. 2. 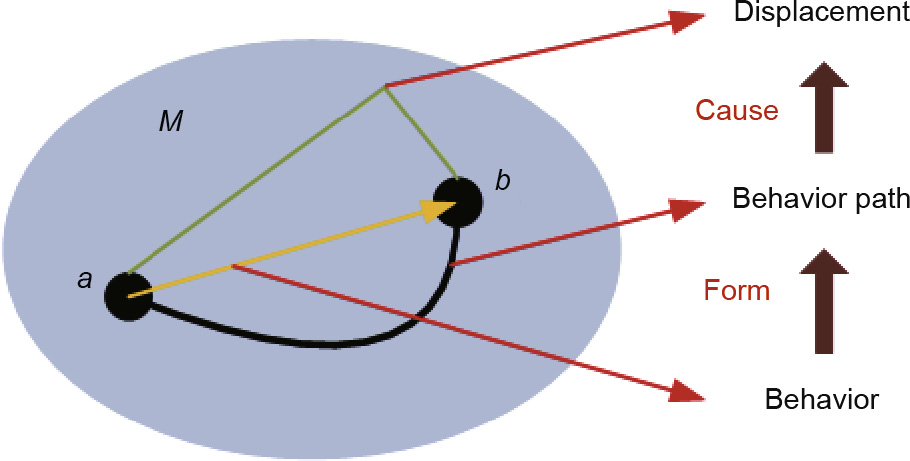 Definition 2.2: A behavior path is a directed segmented smooth curve that connects the starting point and the ending point of the behavior transformation.

For a behavior path connecting a; b∈M

(2) Uniqueness of the parallel vector field. There exists a unique vector field, which parallels the tangent of the behavior path curve on the differential manifold.

For path curve described in Eq. (3), we define v0 as the velocity (i.e., tangent vector) of the path curve ρ at point a (t = 0). Thus, on the manifold M, we can determine the only tangent vector field v(t) parallel to the tangent vector along the path curve based on the starting point moving velocity v0 of the behavior path. As a component of v(t), vi(t) is the unique solution to the following homogeneous linear ordinary differential equations:

; X is the tangent vector field; i, j, and k are the indexes of coordinate component; and

is the Christoffel symbol of the point ρ(t).

《2.3. The action and utility of network behavior》

2.3. The action and utility of network behavior

The instantaneous movement of the point changes with the homeomorphic transformation at any point in the behavior path, thus allowing the action of the behavior to be defined.

Definition 2.3: The action of a certain point on the behavior path is the transformation changing the movement state of the point.

Definition 2.4: The differential element of utility at a certain point on the behavior path is the dot product of the action vector and the infinitesimal motion vector at that point.

Therefore, dEρ(t) is a scalar that is independent of the selection of the localized coordinate system of the manifold because the m-dimensional smooth manifolds M, D[v, ρ'(t)], and dsρ(t) are both m-dimensional vectors.

Definition 2.5: The behavior utility is the sum of the action utility of all points on a behavioral path.

The fixed reference coordinate system (O; χ1; χ2; ..., χm) is chosen on a differential manifold M. For any point position ρ(t) on it, the vector r of the coordinate value xi is a function of the point parameter t:

The derivative of t is calculated and expressed with the Einstein summation convention as follows:

where gi is the instantaneous covariant basic vector at the point position at time t, and can be expressed as follows:

Thus, when the point position parameter changes from t to (t + dt),

describes the movement vector of the point position ρ(t) on the differential manifold M (Fig. 3). 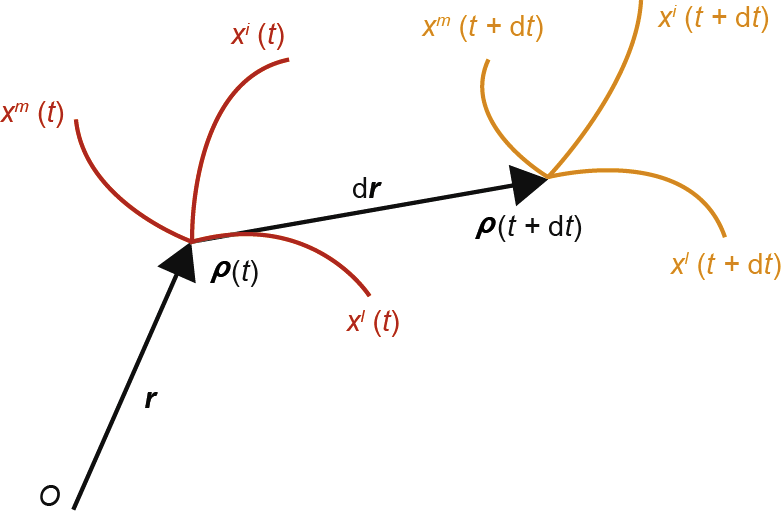 《3.1. Calculation of the action of network system behavior》

3.1. Calculation of the action of network system behavior

The tangent vector of the path curve ρ at point position ρ(t) is denoted by ρ(t), which satisfies

Derive the derivative of t

where l is an coordinate component;

is the Christoffel symbol, which satisfies

Thus, the total derivative of the vector component ui for the parameter t is:

is the covariance derivative of gi(t) on ρ'(t). Since gi（t）is the parallel movement of gi along ρ, we have

Therefore, for any point position ρ(t) on the behavior path curve ρ, Eq. (16) gives the calculation of the action D[v,ρ'(t)] at the point position.

The tangent vector of the path curve ρ is

where ci is the ith critical value and these critical points divide the behavior interval [a,b] into the following d+1 regular segments:

From Eq. (10), the movement of the p point position occurs on the behavior path ρ; then the movement vector dρ in interval dt is

In fact, dq is the arc length element of the path curve at the point p, and the differential element of utility is

where u(t) is the tangent vector of the behavior path curve ρ at the point ρ(t).

Thus, in a regular segment [p,q], the behavior utility based on the covariant vector is calculated as follows:

where u(t) is the tangent vector of the behavior path curve ρ at the point position ρ(t), and gij=gi·gj

Therefore, for the path curve described in Eq. (3), Eq. (23) gives the calculation of the behavior utility in the regular segment [p,q].

3.2.2. Calculation of Dui(t) in the utility formula

According to Morse theory (II), there exists a smooth geodesic γ from a to b on the Riemann manifold M, where

(1) v(t) is the tangent vector field on the smooth geodesic γ; and

(2) u(t) is a nonzero Jacobi field along the geodesic γ.

where R(V,U) is the curvature of operator, which satisfies

3.3.1. Determination of the critical point of the path curve

If the Hessian matrix

of ρ at c is non-degenerate, that is,

then there are m eigenvalues λj(1≤j≤m) for Hρ(c). If the number of negative eigenvalues in λj is k, then k is called the Morse index of the critical point c.

According to Morse theory, if c ∈ρ-1[a,b] is the only critical point, then Mb is homotopically equivalent to the CW complex

represents the disjoint union, Sk is a k-dimensional sphere, and φ :δSk →Ma represents a homeomorphism.

For the differential manifold of regular segments on the behavior path, we use the homotopically equivalent CW complex description. The Morse index of ci at the critical point is defined as ki. At the starting point of the path, we have k0 =0; Morse theory is used to obtain the homotopically equivalent relation of the differential manifold, as shown in Table 1.

When calculating the behavior utility of each regular segment, we use the homotopically equivalent CW complex as the descriptive manifold of M.

3.3.2. The principle of behavior utility on the path

of the path curve.

In an arbitrary regular segment

《4. Evaluation framework of the network attackdefense confrontation based on behavior utility》

4. Evaluation framework of the network attackdefense confrontation based on behavior utility

A network system security evaluation can be performed from a variety of perspectives, with different methods of evaluation for each perspective. During the assessment process of the network attack and defense, we are often confronted with the question of whether a given network security defense system has enough ability to resist a certain type of attack. This paper proposes an evaluation framework for such questions by calculating the utility of network attack and defense.

《4.1. Identification and recognition of network attack and defense》

4.1. Identification and recognition of network attack and defense 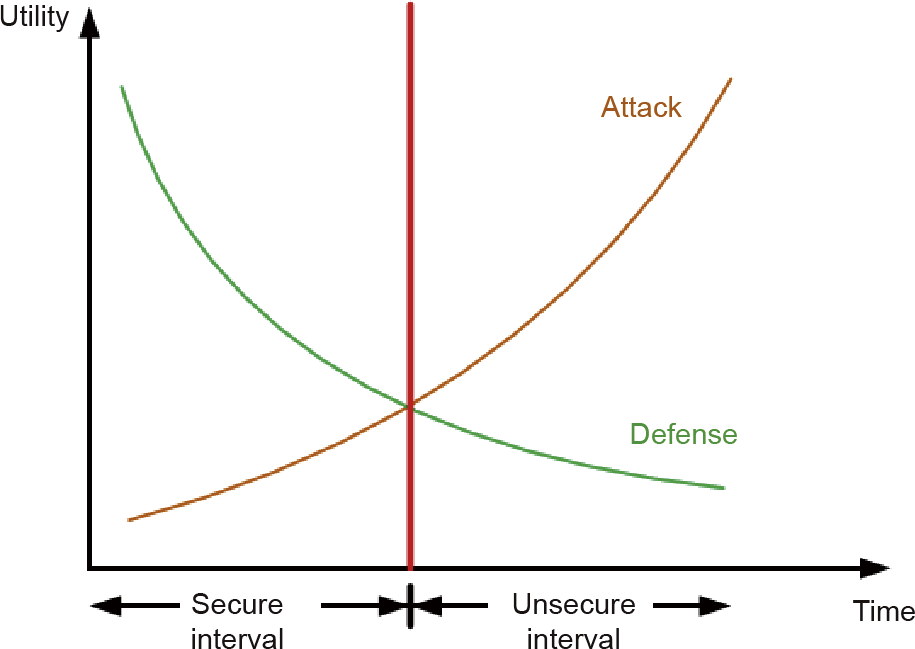 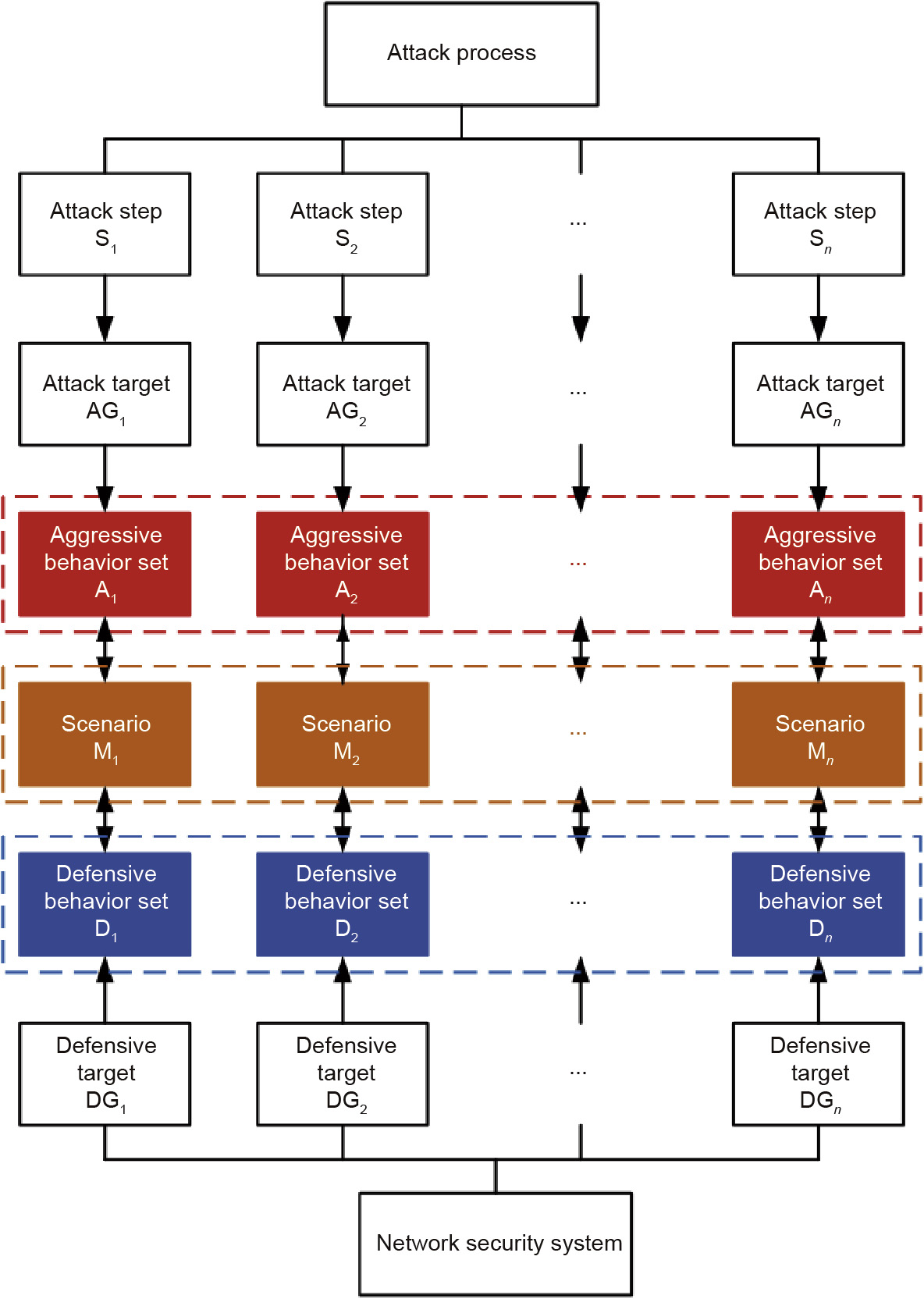 Suppose the given attack A consists of n sessions; the attack behavior corresponding to the ith session is

where aij is the ith session of the jth attack behavior, which satisfies

Let the ith session of the attack scenario be Mi , then the defensive behavior of the corresponding scenario is

where dik is the kth defense of the ith session, which satisfies

Thus, the attack utility in the ith session is the behavior utility of the ordered attack behavior set Ai in the Mi scenario; that is,

The defense utility in the ith session is the behavior utility of the ordered defense behavior set Di in the Mi scenario; that is,

Since the behavior of the attack and defensive sequences occurs in the same scenario, if EAi≥ EDi , then the ith attack is successful; otherwise, the attack is unsuccessful, according to Eq. (35).

Judgment and identification criteria of the network attack and defense

Given the network security defense system, for each session of the specified attack,

《4.2. Network security assessment framework based on attack and defense effectiveness》

4.2. Network security assessment framework based on attack and defense effectiveness

Network security assessment based on the attack and defense effectiveness includes three parts: determination of the scenario differential manifolds, the behavior path calculation, and identification of offensive and defensive behavior utility. Its processing flow is shown in Fig. 6.

Behavior utility is the basic indicator of the design and evaluation of a system based on a logical behavioral relationship. The research described in this paper provides implications for future research.

This work is supported by the National Key Research and Development Program of China (2016YFB0800700).