b Department of Molecular Biosciences and Bioengineering, University of Hawaii at Manoa, Honolulu, HI 96822, USA

Essential oil has been used as sedatives, anticonvulsants, and local anesthetics in traditional medical remedies; as preservatives for food, fruit, vegetable, and grain storage; and as bio-pesticides for food production. Linalool (LL), along with a few other major components such as methyl eugenol (ME), estragole (EG), and citronellal, are the active chemicals in many essential oils such as basil oil. Basil oil and the aforementioned monoterpenoids are potent against insect pests. However, the molecular mechanism of action of these chemical constituents is not well understood. It is well-known that the γ-aminobutyric acid type A receptors (GABAARs) and nicotinic acetylcholine receptor (nAChR) are primary molecular targets of the synthetic insecticides used in the market today. Furthermore, GABAAR-targeted therapeutics have been used in clinics for many decades, including barbiturates and benzodiazepines, to name just a few. In this research, we studied the electrophysiological effects of LL, ME, EG, and citronellal on GABAAR and nAChR to further understand their versatility as therapeutic agents in traditional remedies and as insecticides. Our results revealed that LL inhibits both GABAAR and nAChR, which may explain its insecticidal activity. LL is a concentration-dependent, non-competitive inhibitor on GABAAR, as the half-maximal effective concentration values of γ-aminobutyric acid (GABA) for the rat α1β3γ2L GABAAR were not affected by LL: (36.2 ± 7.9) µmol·L−1 and (36.1 ± 23.8) µmol·L−1 in the absence and presence of 5 mmol·L−1 LL, respectively. The half-maximal inhibitory concentration (IC50) of LL on GABAAR was approximately 3.2 mmol·L−1. Considering that multiple monoterpenoids are found within the same essential oil, it is likely that LL has a synergistic effect with ME, which has been previously characterized as both a GABAAR agonist and a positive allosteric modulator, and with other monoterpenoids, which offers a possible explanation for the sedative and anticonvulsant effects and the insecticidal activities of LL.

Linalool (LL), methyl eugenol (ME), estragole (EG), and citronellal are major compounds found in many plant essential oils such as those extracted from basil, lavender, and lemongrass. Essential oils have been used as sedatives, anticonvulsants, antimicrobials, anxiolytics, and local anesthetics in traditional medical remedies [1,2]. In modern applications, the aforementioned compounds are found in aromatherapy products [3], flavoring agents [4], fragrance products, insecticides [5,6], and various household cleaning agents [7]. Many of the chemical constituents of basil oil display anticonvulsant activities in experimental animal models [8]. Basil oil has also shown anti-hyperalgesic effects in fibromyalgia murine models [9]. In addition, LL (a major constituent in many essential oils, particularly basil oil) is effective in the pentylenetetrazol, picrotoxin, and maximal electroshock seizure models [10,11], and has exhibited sedative effects in murine models [12]. Previous studies have found that these properties are related to the

-aminobutyric acid (GABA)ergic, cholinergic, dopaminergic, glutaminergic, serotoninergic, and parasympathetic systems [6,8,13–16]. However, the molecular mechanisms of action of those chemical constituents, including LL, ME, EG, and citronellal are not well understood.

-aminobutyric acid type A receptors (GABAARs) are the primary inhibitory neurotransmitter receptors in the central nervous system (CNS). The GABAARs belong to the cys-loop ligandgated ion channel family, which also includes the nicotinic acetylcholine receptor (nAChR), an excitatory neurotransmitter receptor. Many studies have proven that GABAARs play essential roles in epilepsy and many other neurodegenerative disorders. A number of clinically prescribed drugs, such as the benzodiazepine family, potentiate GABAAR inhibitory functions. Interestingly, the potentiation potency of some anticonvulsants on GABAAR does not correlate well with the drug’s anticonvulsive efficacy, and some of them inhibit the Nav1.2 voltage-gated sodium ion (Na+ ) channels [17,18]. Furthermore, lamotrigine, an anticonvulsant, was recently reported to inhibit the nAChR [19], in addition to blocking the voltage-gated Na+ channels [20]. Therefore, since basil oil has been used as sedative, anticonvulsant, bio-pesticide, and food preservative [5,21], here we studied the electrophysiological effects of the major monoterpenoid components of basil oil (Fig. 1) on the nAChR and GABAAR in order to further elucidate the molecular mechanism of action of those monoterpenoids.

The cell-flow device used for rapid ligand solution delivery to membrane proteins at the cell surface has been described in detail [25]. To summarize, a U-shaped tube with a porthole of diameter of 150 μm in the middle was connected to the inlet and outlet tubing, which were pumped by a Minipuls® 3 peristaltic pump (Glison, Inc.; Middleton, WI, USA). The solution delivery timing and length were automatically triggered and controlled. This device allowed the delivery of ligand solution to flow over the cell and exchange within milliseconds.

GraphPad Prism Version 5.04 for Windows (GraphPad Software, Inc.; San Diego, CA, USA) was used to fit the inhibition curves of the receptors by LL and the dose-dependent responses of the GABAAR in the absence and presence of 5 mmol·L-1 LL. Agonist concentration–response relationships were fitted to the equation

, where I and Imax represent the current at a given agonist concentration (CA) and the maximal agonistinduced current, respectively. EC50 is the half-maximal effective concentration and nH is the Hill coefficient. PTZ inhibitionresponse relationships were fitted with the equation

, where IA and I0 are the current amplitudes in the presence and absence of LL, respectively. IC50 is the half-maximal inhibitory concentration, and CLL is the concentration of LL. Data were expressed as the mean ± standard error of mean (SEM).

2L GABAAR (Fig. 2(a)). Interestingly, LL also inhibited the α3β4 nAChR with similar potency as on the GABAAR (Fig. 2(b) versus Fig. 2(a)) when co-applied with carbamoylcholine, even though its efficacy seemed higher. The incomplete inhibition by LL on the GABAAR is probably due to the solubility limit of LL in aqueous solution, as the highest concentration we were able to obtain was 50 mmol·L-1 . The whole-cell currents of the nAChR were induced by a near-saturating concentration of carbamoylcholine, which is a stable analog of the endogenous agonist acetylcholine.

Fig. 2. Dose-dependent inhibition of LL on the whole-cell currents of the (a) α1β3

The GABA dose–response curves in the absence and presence of 5 mmol·L-1 LL showed that LL inhibited the whole-cell currents induced by the agonist GABA, while the agonist affinity was not changed (Fig. 3): The EC50 values were (36.2 ± 7.9) μmol·L-1 and (36.1 ± 23.8) μmol·L-1 in the absence and presence of LL, respectively. Therefore, LL is a non-competitive inhibitor of the receptor. 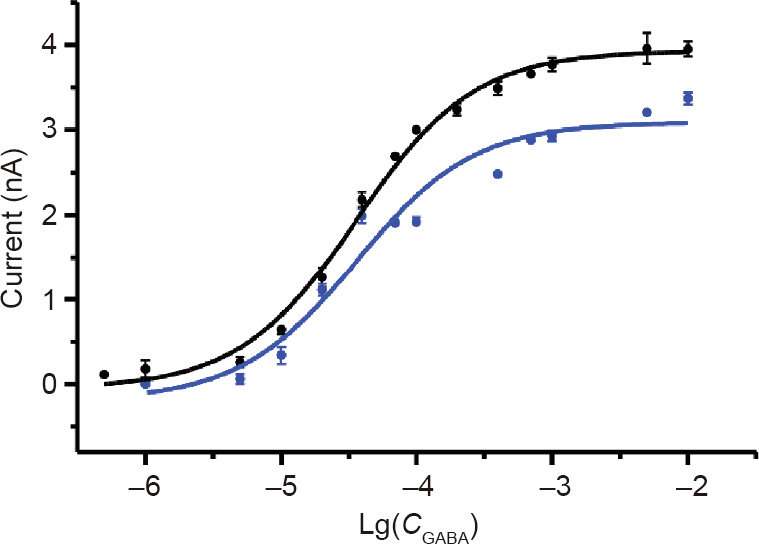 Fig. 3. GABA dose–response curves in the absence (black) and presence (blue) of 5 mmol·L-1 LL in WSS-1 cells that expressed the rat α1β3

PTZ, also known as metrazol, causes convulsions and has been used in animal models to induce seizure. The PTZ-induced mouse seizure model (i.e., the scMET mouse model) has been used routinely to screen anticonvulsant drugs by programs such as the National Institutes of Health (NIH)’s Epilepsy Therapy Screening Program↑ . We wondered whether LL binds to the same site as PTZ. Our results showed that when LL was co-applied with PTZ, the inhibition on GABAAR was significantly increased in comparison with LL or PTZ alone (Fig. 4(a)). The PTZ binding site on GABAAR is characterized as overlapped with the picrotoxin binding site [28,29]. Furthermore, the antagonistic effect of LL on the GABAAR was reversible (Fig. 4(b)). Therefore, LL exerts its reversible allosteric GABAAR modulation at a different site from the PTZ/picrotoxin site.

Fig. 4. (a) Significant increase in inhibition on rat α1β3

《3.3. ME, EG, and citronellal are weak GABAAR and nAChR inhibitors》

3.3. ME, EG, and citronellal are weak GABAAR and nAChR inhibitors

ME is a dose-dependent, direct agonist of the GABAAR at concentrations greater than 100 μmol·L-1 (up to 10 mmol·L-1 ), while sensitizing and potentiating GABA-induced currents at low concentrations of GABA (30 μmol·L-1 ) [30], which offers a possible explanation for its anticonvulsant activity. We further expanded on this to assess the antagonistic activity of ME at high doses (mmol·L-1 ), considering that LL also inhibited GABAAR at high doses. It was apparent that high doses (10 mmol·L-1 ) of ME weakly antagonized the GABAAR (Fig. 5). EG also had a similar effect at high doses (Fig. 5). Interestingly, both (R )-C and (S )-C weakly inhibited the α3β4 nAChR (data not shown); however, (R )-C appeared to have no effect on the GABAAR, whereas (S )-C had weak inhibitory activity on the GABAAR (Fig. 5). In a word, ME, EG, and (S )-C are comparatively weak antagonists of the GABAAR, and require very high doses to produce any change in GABA-induced currents. 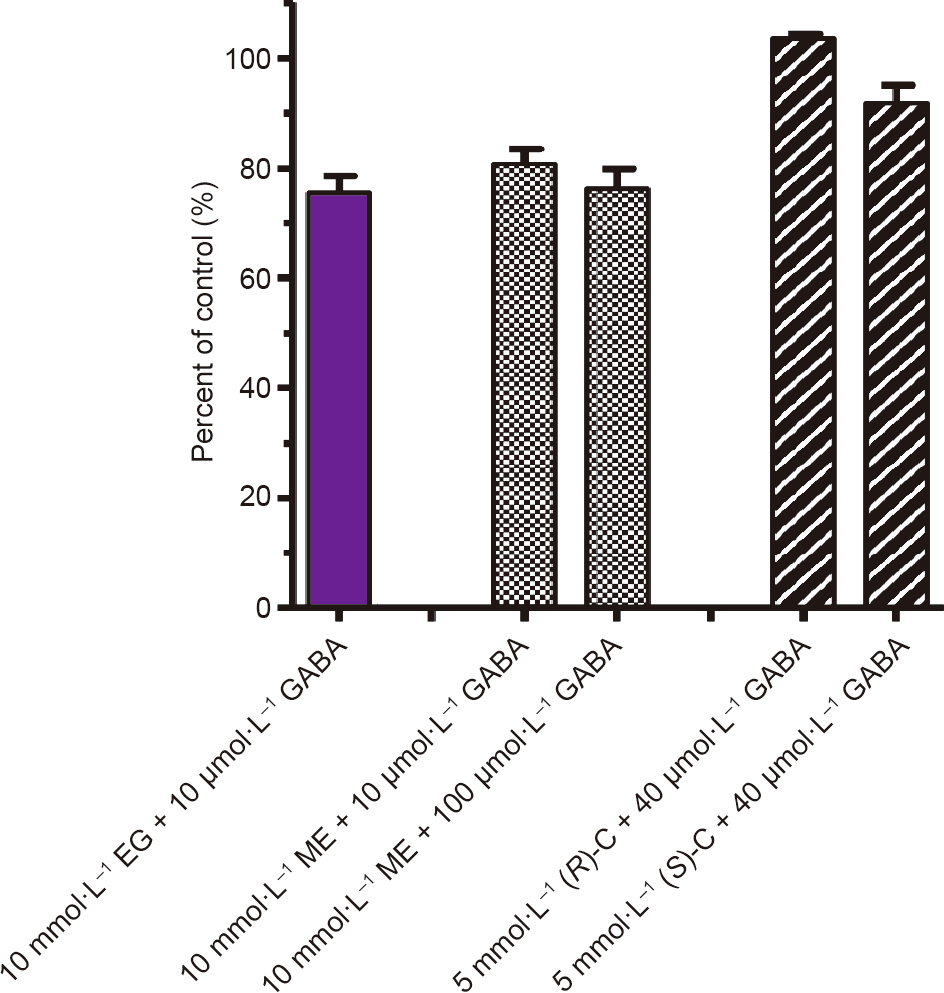 Based on the data available so far, it is difficult to make a conclusion on the primary target of EG and (R )-C/(S )-C. (R )-C/(S )-C has been shown to exert anticonvulsant and antinociceptive effects in vivo, which have been inferred to occur via GABAAR modulation, albeit without a clear mechanism of action [31,32]. However, in the present in vitro study, EG and (S )-C had weak antagonistic effects on the GABAAR and nAChR, suggesting that the primary target of action lay elsewhere. ME has been shown to be both a GABAAR agonist at low concentrations and a positive allosteric modulator at moderate concentrations [30]; however, we have illustrated that it may be a weak GABAAR antagonist at high doses, which suggests that the effects of ME are very complex.

The results of the present study demonstrate that LL is a concentration-dependent GABAAR antagonist that modulates its activity outside of the PTZ/picrotoxin site on the GABAAR. The inhibitory effect of LL on the GABAAR observed in the present study disagrees with previous findings in which LL had anticonvulsant activities in cells and mouse models [8,33], and depressant effects on the CNS, sensory neurons [34], and even peripheral nerves [35]. The inhibitory effect of LL on the GABAAR suggests neuronal excitability (e.g., seizure-like activity), which may provide a possible explanation for its use as an insecticide [5,6].

While this finding may seemingly contradict prior studies on LL’s anticonvulsant and sedative effects, LL has been described to have multiple targets, including the N-methyl-D-aspartate (NMDA) receptor [11,33,36] and voltage-gated Na+ and Ca2+ channels [16,35]. LL has also been shown to inhibit acetylcholine release at the neuromuscular junction and the kinetics of the miniature end-plate current decay [37]. Our results reveal that LL is a potent inhibitor of neuronal nAChR. When the homology between the muscle type and neuronal nAChR and the sharing of many allosteric modulators are considered [38], this finding comes as no surprise. At this time, further research is warranted to describe the primary molecular mechanism of action of LL. We hypothesize that the nAChR, NMDA receptors, and/or voltage-gated Na+ and Ca2+ channels may be the primary targets, as suggested by other studies [36], especially considering that NMDA receptors and voltagegated Na+ and Ca2+ channels are targets of many other anticonvulsant drugs [39].

More importantly, the co-localization and crosstalk among those receptors in the CNS [40,41] make the interaction with small molecules different from the simple recombinant system used here. Mounting evidence has exemplified the co-localization and crosstalk among excitatory and inhibitory neurotransmitter receptors. For example, both potentiation and suppression of the GABAAR function by NMDA receptor activation have been studied extensively, and vice versa [42–45]. The nAChR and GABAAR are also co-localized in many areas of the brain, and activation of nAChR has been reported to block GABA-induced currents on hippocampal interneurons [46]. However, their interactions are not well understood.

Essential oils are composed of multiple monoterpenoids (including LL, ME, EG, and citronellal). It is reasonable to hypothesize that LL and other monoterpenoids modulate multiple different receptors and channels with varying potency to achieve synergistic effects [5]. It is also possible that monoterpenoids modulate the interplay among different neurotransmitter receptors. The observed mode of action of the monoterpenoids supports the use of essential oil components as sedatives, anticonvulsants, local anesthetics, and insecticides. The results warrant further research and development of essential oil components as human therapeutics and botanical insecticides, particularly the selectivity of monoterpenoids to various insect neuro-receptors.

Amy S. Li, Akimasa Iijima, Junhao Huang, Qing X. Li, and Yongli Chen declare that they have no conflicts of interest or financial conflicts to disclose.

[3]  Lawless J. The encyclopedia of essential oils: the complete guide to the use of aromatic oils in aromatherapy, herbalism, health, and well being. San Francisco: Conari Press; 2013. link1