Campylobacter spp. (C. spp.) are the leading cause of human gastroenteritis worldwide. RE-CmeABC is a newly identified resistance-enhancing multidrug efflux pump of C. spp. that confers high-level resistance to fluoroquinolones, phenicols, macrolides, and tetracyclines, all of which are critical drugs in both human and veterinary medicine. In this study, we analyzed the presence and antimicrobial susceptibility of RE-cmeABC-positive Campylobacter isolates of food-animal origin from three representative regions (Shandong, Shanghai, and Guangdong) in China over three successive years, from 2014 to 2016. A total of 1088 Campylobacter isolates (931 C. coli and 157 C. jejuni) were recovered from the RE-cmeABC screening. We detected 122 (11.2%) RE-cmeABC-positive isolates of chicken origin, including 111 (70.7%) C. jejuni and 11 (1.2%) C. coli. This multidrug efflux pump is more prevalent among C. jejuni than C. coli. The level of resistance was significantly different in 111 RE-cmeABC-positive C. jejuni versus 46 RE-cmeABC-negative C. jejuni for florfenicol, clindamycin, and erythromycin (P < 0.05), but not for ciprofloxacin (CIP), tetracycline (TET), and gentamicin. However, the isolates harboring RE-cmeABC could shift the minimum inhibitory concentration distribution to the higher range for CIP and TET. Pulsed-field gel electrophoresis (PFGE) analysis suggested that horizontal transmission might be involved in the dissemination of RE-cmeABC in Shanghai and Guangdong, while clonal expansion was predominant in Shandong. Three isolates shared the indiscriminate PFGE types of RE-cmeABC-positive C. jejuni isolates in Shanghai and Guangdong, and four isolates in Shanghai and Shandong. Our study suggests the possibility of a wide dissemination of RE-cmeABC in Campylobacter of food-animal origin, which would pose a significant threat to public health.

Campylobacter spp. are Gram-negative thermophilic bacteria that are major etiologic agents for human foodborne illness (campylobacteriosis) worldwide [1,2]. Among all Campylobacter species, Campylobacter jejuni (C. jejuni) and Campylobacter coli (C. coli) are the leading causes of human gastroenteritis [3]. Moreover, C. jejuni infection may lead to autoimmune conditions known as Guillain–Barré syndrome (GBS) and Miller Fisher syndrome [2]. Poultry, contaminated water, and raw milk are the most frequent vehicles for illness [4]. Chickens are the major host of Campylobacter due to their suitable intestinal environment, and thus play a critical role as the typical source of Campylobacter infections in industrialized nations [5].

Campylobacter infections are generally self-limiting and treated with supportive therapy, such as maintenance of hydration and electrolyte balance [6]. However, antimicrobial chemotherapy is recommended for patients with severe symptoms, extraintestinal infections, or acquired immune deficiency syndrome (AIDS) [6]. Fluoroquinolones and macrolides are the drugs of choice to treat campylobacteriosis [7], while tetracycline (TET) and gentamicin (GEN) are used to treat the systemic infection caused by Campylobacter [7]. However, widely used antimicrobial agents, such as ciprofloxacin (CIP) and azithromycin, have been challenged by drug resistance in both human and animal isolates. The European Union summary report on antimicrobial resistance in zoonotic and indicator bacteria in 2017 showed that 57.7% of C. jejuni and 63.5% of C. coli of human origin were resistant to CIP [8]. Data from the National Antimicrobial Resistance Monitoring System (NARMS) report in the United States indicated that CIP resistance increased in C. coli from humans (34% in 2012 to 40% in 2015) and continued to increase or remained high in C. jejuni isolates from chickens (ranging between 22% and 28% during 2012–2015) [9]. Hence, the US Centers for Disease Control and Prevention (CDC) listed drug-resistant Campylobacter as a serious antibiotic resistance threat to public health in 2013 [10]. Similarly, the World Health Organization (WHO) listed fluoroquinolone-resistant Campylobacter species as high-priority pathogens in 2017 [11].

Unlike the United States and Europe, China lacks a complete antimicrobial resistance surveillance network for Campylobacter. Surveillance on Campylobacter in parts of China has shown that CIP resistance has reached a high level, with the most noticeable rates being observed in Jiangsu (85.2%) [12], Beijing (87.5%) [13], Shenzhen (89.7%) [14], and Shanghai (97.4%) [15]. Furthermore, the Campylobacter isolated from broiler chickens and swine in five provinces during 2008–2014 exhibited 100% resistance to CIP [16], suggesting that this drug may no longer be suitable for the treatment of Campylobacter infection in these areas.

The main mechanism of Campylobacter resistance to fluoroquinolones is mediated by point mutations in the quinolone resistance-determining region of GyrA and the tripartite multidrug efflux pump CmeABC [17,18]. CmeABC belongs to the resistancenodulation-division (RND) protein family, and consists of a membrane fusion protein (CmeA), an inner membrane transporter (CmeB), and an outer membrane protein (CmeC) [19]. As a predominant efflux pump for Campylobacter, CmeABC extrudes toxic compounds as well as structurally diverse antimicrobials including fluoroquinolones, phenicols, macrolides, and TETs [20]. It is notable that a potent variant of CmeABC, named RE-CmeABC, has recently been found in Campylobacter [21]. Using basic local alignment search tool (BLAST), the unique CmeB shares 80.5%–81.2% amino acid sequence identity with wide-type CmeB in RE-cmeABC-negative strains; and its differences mostly contribute to the enhanced resistance level to various antibiotics. Furthermore, RE-CmeABC not only promotes the emergence of fluoroquinolone-resistant mutants under selective pressure, but also confers exceedingly high-level resistance (minimum inhibitory concentration (MIC) of CIP ≥ 128 mg·L-1 ) to fluoroquinolone in the presence of GyrA mutations [21].

Since the RE-cmeABC genes were first identified in 2014, no surveillance of RE-cmeABC genes in Campylobacter collected from the same regions has been conducted. We therefore investigated the presence and antimicrobial susceptibility of RE-cmeABC-positive Campylobacter isolates of food-animal origin from slaughterhouses and farms in three representative regions of China during 2014–2016.

We analyzed the presence and epidemic trend of RE-cmeABC in Campylobacter over three successive years (2014–2016) in three regions of China (Guangdong, Shandong, and Shanghai). A total of 1088 Campylobacter isolates (931 C. coli and 157 C. jejuni) were recovered, of which the isolates from 2014 have been published previously [21]. These Campylobacter strains were isolated from the cecal contents, carcasses, feces, and retail meat of swine and chickens under our laboratory’s annual antimicrobial resistance surveillance program during 2014–2016. All of the Campylobacter strains were grown on Mueller–Hinton (MH) agar (Sigma–Aldrich, Inc., USA) at 42 °C under microaerobic conditions (5% oxygen, 10% carbon dioxide, 85% nitrogen) for 18–24 h. All isolates were screened for the presence of the RE-cmeB gene using the primers RE-cmeBF (5' -CGTATTGCACGATTATTTGGAC-3' ) and RE-cmeBR (5' -ATCGTTATCAAACCCTCTATGTGCC-3' ). To investigate whether the high-level resistance to CIP was relevant to the coharboring of the DNA gyrase gyrA mutation and RE-cmeABC, multiplexmismatch amplification mutation assay-polymerase chain reaction (MAMA-PCR) was used to detect the single nucleotide mutation (C257 to T) that is frequently observed in the gyrA gene of all REcmeABC-positive strains [22].

The standard agar dilution method recommended by the Clinical & Laboratory Standards Institute (CLSI) M45 (2016) was used to determine the MICs of various antimicrobial agents for all Campylobacter isolates [23]. The tested antimicrobial agents included: GEN, erythromycin (ERY), CIP, TET, and clindamycin (CLI). Standardized MIC breakpoints for phenicols were not available for Campylobacter from the CLSI. Therefore, we utilized the breakpoint as recommended by the NARMS [24]. C. jejuni ATCC 33560 was used as the quality-control strain.

A total of 97 representative Campylobacter isolates containing RE-cmeABC were genotyped by pulsed-field gel electrophoresis (PFGE), conducted with a CHEF-DR III apparatus (Bio-Rad Laboratories, Inc., USA) in accordance with the protocol for Campylobacter [25]. The DNA of Campylobacter was digested with SmaI, while Salmonella H9812 was digested with XbaI used as the reference marker. The results were analyzed with InfoQuest FP software version 4.5 (Bio-Rad Laboratories, Inc., USA).

A descriptive analysis of the percentage and prevalence (together with 95% confidence intervals (CIs)) was performed using the functions provided in Excel 2016 (Microsoft, USA). Univariable analysis among RE-cmeABC, Campylobacter species, and MIC values of antimicrobial agents was conducted using Prism 7.0 (GraphPad Software, USA), which was adopted to select variables with P ≤ 0.05. The association between RE-cmeABC positivity and the variables was examined by odds ratio (OR). The differences between the rates were tested by Χ2 or Fisher’s exact test, if appropriate.

《3.1. Presence of RE-cmeABC in Campylobacter》

3.1. Presence of RE-cmeABC in Campylobacter

The percentages of RE-cmeABC-positive C. jejuni isolates for each year are shown in Fig. 1(a). The positive isolates maintained a high level and did not significantly increase during the three years of the study (P > 0.05). Similarly, the prevalence of RE-cmeABC-positive C. jejuni from Guangdong and Shanghai slightly increased over the three years of sampling (Fig. 1(b)). However, the rate from Shandong remained at a low level during 2014 and 2015, while a rapid emergence of high prevalence (76.1%, 35/46, 95% CI: 61.2–87.4) occurred in 2016 (Fig. 1(b)). These data are of particular concern with regards to public health, as RE-cmeABCpositive C. jejuni now presents at a high rate in these major livestock and poultry production areas of China.

Table 1 MIC profiles of C. jejuni with or without RE-cmeABC.

RE-cmeABC has been shown to have an enhanced exporter function compared with wide-type cmeABC, the latter of which can pump drugs out of cells; this is true for fluoroquinolones, phenicols, macrolides, and TETs [21]. Although there is no significant difference between RE-cmeABC-positive and -negative isolates in their resistance to CIP and TET, the isolates harboring RE-cmeABC shifted the MIC distribution to a higher range for both CIP and TET (Fig. 2), which was consistent with previous results [21]. Interestingly, the high-level resistant (≥ 16-fold of MIC breakpoint) isolates of CIP and TET were significantly higher in RE-cmeABC-positive isolates than in RE-cmeABC-negative isolates (P < 0.0001 and P = 0.0004, respectively). These results indicate that RE-CmeABC increases the antibiotic MICs at the population level, which is consistent with previous results [21]. As a verification of the mechanism of high-level resistance to CIP, we detected the single nucleotide mutation (C-257 to T) that is frequently observed in the gyrA gene. However, all RE-cmeABC-positive isolates harbored the C257T mutation, which further confirmed that the combination of the GyrA mutation and RE-CmeABC contributes to the high-level resistance to CIP. It is unknown whether the MIC values are related to the expression level of CmeABC. CmeABC is primarily regulated by CmeR, which binds to the promoter region of the cmeABC operon and functions as a transcriptional repressor [29].

The 97 representative RE-cmeABC-positive C. jejuni (37 from Shanghai, 25 from Guangdong, and 35 from Shandong) were analyzed by PFGE. Using a cutoff of 80% pattern similarity, the RE-cmeABC C. jejuni isolates were clustered into 30 PFGE patterns, including 13 unique patterns and 17 clusters (Fig. 3). The isolates from Shanghai showed the most patterns (eight clusters and seven unique patterns), followed by the Guangdong isolates (11 clusters and six unique patterns), and the Shandong isolates (five clusters). No predominant clones existed in the Shanghai and Guangdong isolates, except for pattern A (27.0%, 10/37) and pattern W (20%, 5/25). These findings suggested that horizontal transmission may be involved in the dissemination of RE-cmeABC-positive C. jejuni in Shanghai and Guangdong. In contrast, pattern B (65.7%, 23/35) was the predominant clone in Shandong, which indicates that regional expansion of a particular clone accounts for a larger proportion of the dissemination. Pattern R was shared by three isolates from Shanghai and Guangdong, while pattern U was shared by three isolates from Guangdong and Shandong. Moreover, strain 16SHKX48-1C, which was isolated from Shanghai, showed pattern J and had 100% homology to the isolates collected from Guangdong in 2016. Meanwhile, four isolates of pattern L, which were collected from Shanghai and Shandong, also shared 100% homology. These findings suggest that some RE-cmeABC-positive C. jejuni with the same PFGE patterns have spread into various regions, and that these isolates are stably transferrable and appear to be highly adaptable. 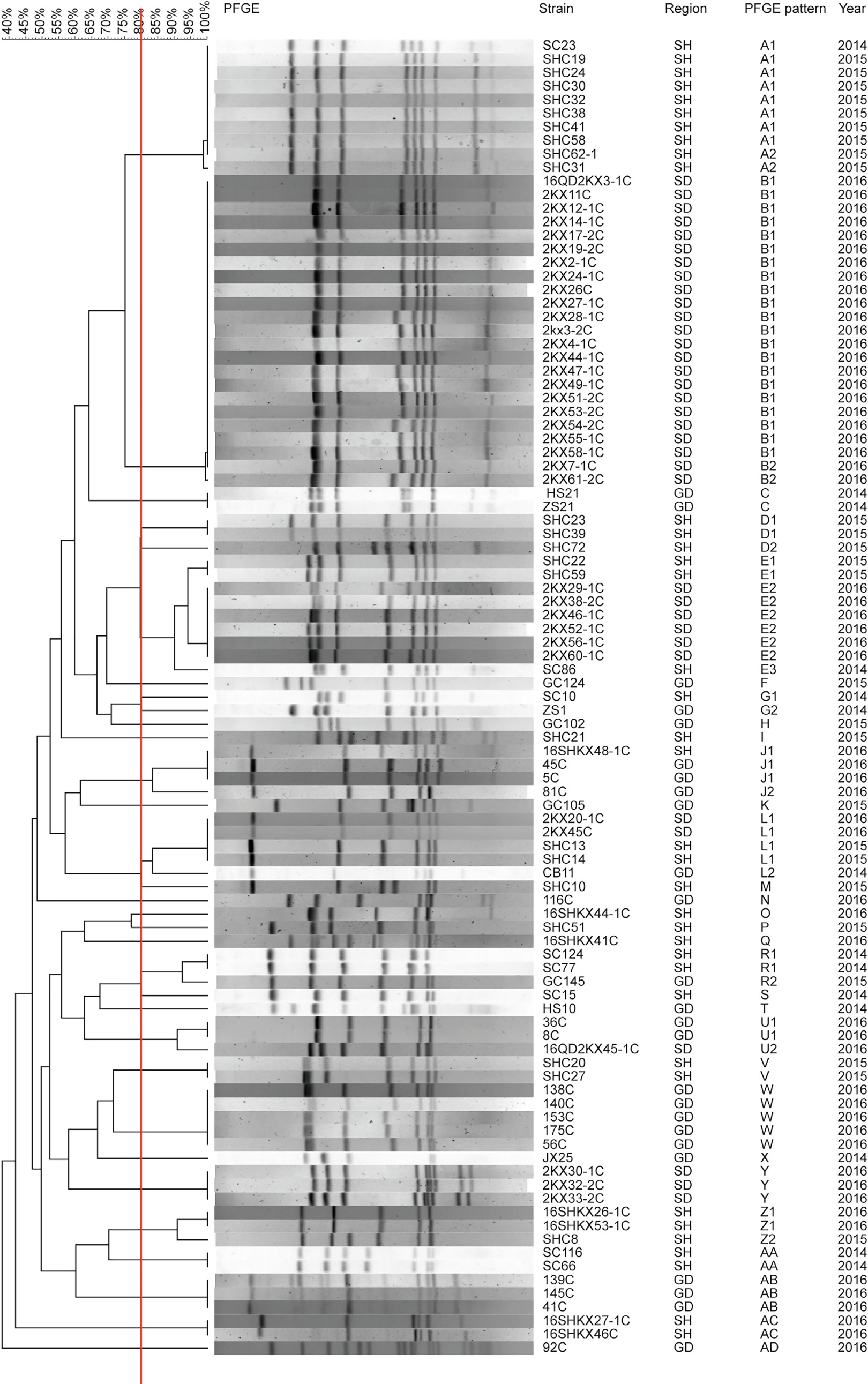