Ferroelastic ABO4 type RETaO4 and RENbO4 ceramics (where RE stands for rare earth) are being investigated as promising thermal barrier coatings (TBCs), and the mechanical properties of RETaO4 have been found to be better than those of RENbO4. In this work, B-site substitution of tantalum (Ta) is used to optimize the thermal and mechanical properties of EuNbO4 fabricated through a solid-state reaction (SSR). The crystal structure is clarified by means of X-ray diffraction (XRD) and Raman spectroscopy; and the surface microstructure is surveyed via scanning electronic microscope (SEM). The Young's modulus and the thermal expansion coefficient (TEC) of EuNbO4 are effectively increased; with respective maximum values of 169 GPa and 11.2×10–6 K–1 (at 1200 °C). The thermal conductivity is reduced to 1.52 W·K−1·m−1 (at 700 °C), and the thermal radiation resistance is improved. The relationship between the phonon thermal diffusivity and temperature was established in order to determine the intrinsic phonon thermal conductivity by eliminating the thermal radiation effects. The results indicate that the thermal and mechanical properties of EuNbO4 can be effectually optimized via the B-site substitution of Ta, and that
this proposed material can be applied as a high-temperature structural ceramic in future.

RETaO4 exhibits a crystal structure that is analogous to that of RENbO4. Different crystal structures are found in RETaO4, which is ascribed to decrease in RE3+ ionic radius. RETaO4 (where RE = Y, Nd–Er) has the m phase, while the rest have the metastable monoclinic (m') phase [1,8]. Furthermore, RETaO4 exhibits a much higher t–m transition temperature than RENbO4. For example, the transition temperature of YTaO4 is about 1430 °C, while it is less than 800 °C for RENbO4 [2,8]. Ferroelastic toughness is a critical property that allows 6 wt%–8 wt% yttria-stabilized zirconia (6–8YSZ) to be applied as a thermal barrier coating (TBC) [9–12]. However, the working temperature limit of yttria-stabilized zirconia (YSZ) is below 1200 °C because of phase transition, which results in a huge volume change. Much effort has been devoted to optimizing the properties of YSZ, and many materials are being investigated as TBCs [13–19]. Herein, ferroelastic RETaO4 and RENbO4 are studied as TBCs with a higher application temperature to replace 6–8YSZ. RETaO4 possesses better thermal and mechanical properties than RENbO4, due to the characteristic properties of tantalum (Ta). In addition, the weak bonding strength of RENbO4 produces an inferior hardness and Young’s modulus, which makes it less useful for application as high-temperature TBCs. Nevertheless, lower centrifugal force will be produced when RENbO4 is applied as TBCs in comparison with RETaO4, due to the lower density. To modify the properties of RENbO4, the B-site substitution of Ta is attempted for EuNbO4 by applying the atomic weight misfit between Ta and Nb and the difference in bond strength between the Ta–O and Nb–O bonds.

The crystal structure was confirmed by means of XRD (MiniFlex600, Rigaku Corporation, Japan). Raman spectroscopy was employed to research the change in crystal structure, along with XRD. A confocal spectrometer (Horiba–Jobin Yvon, Horiba, Ltd., USA) was utilized to collect Raman spectra using a He–Ne ion laser (532 nm). SEM (EVO 180, Zeiss, Germany) was employed to survey the superficial morphology, because the grain size, pores, and cracks affected the thermal and mechanical properties. 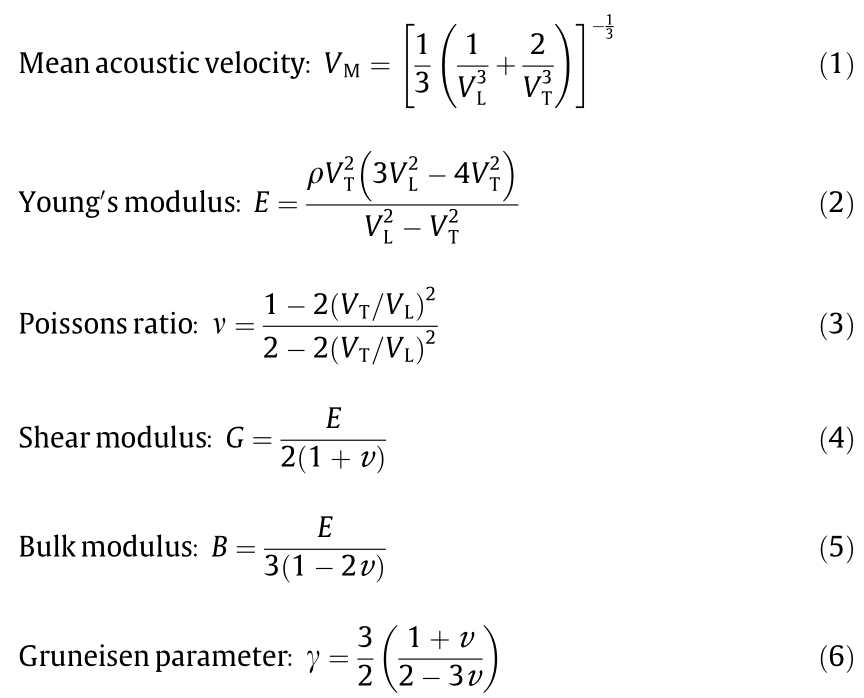 The thermal expansion coefficients (TECs) were determined by means of a thermal expansion rate curve. Thermo–mechanical analysis (TMA 402 F3, NETZSCH, Germany) was employed to test the temperature-dependent thermal expansion rate (100–1200 °C). The test was conducted in argon (Ar) gaseous fluid, the specimens were cut to a size of 8 mm × 2 mm × 1 mm to adapt to the sample holder. The heating speed was 5 K·min-1 . The test time lasted for about 5 h, with only one sample being tested each time.

The bulk specimens were machined into discs with a radius of 3 mm and a thickness of 1 mm to fit the sample holder in order to test the thermal diffusivity (λ). Silver (Ag) and carbon (C) coatings were applied to reduce the thermal radiative conductivity, and ensure to absorption and maximum emissivity. The test was executed under Ar gas protection within a laser flash instrument (LFA 457, NETZSCH, Germany). Three samples were tested each time, and the test lasted for about 12 h. The thermal diffusivity was corrected by means of the ‘‘radiation + pulse” method; three tests were performed at each temperature point and the average value was used. The thermal conductivity (k' ) was determined from the λ, CP , and ρ as follows [21]:

where the specific heat, CP , was computed using the Neumann– Kopp principle [22], and ρ is the density. The influence of porosity,

, on thermal conductivity was removed as follows [21]:

The phonon mean free path, l, was typically depressed by diverse scattering procedures, indicating that l and k decrease with an increase in the phonon scattering strength.

Fig. 1(a) shows that the experimental EuNb1–X TaX O4 XRD peaks are consistent with those of standard PDF#22-1099, and that no peak for the precipitated phase is present. EuNb1–X TaX O4 crystallizes in the m phase; no crystal structure transition was detected with an increase in the Ta content. Fig. 1(b) shows that the main XRD peaks slightly deviate from those on the standard PDF card, which relates to the sintering temperature. The final sintering temperature of EuNbO4 is 1400 °C; it increases with an increase in Ta content, and is 1600 °C for EuNb2/6Ta4/6O4. Similar roomtemperature Raman peaks were found for EuNb1–X TaX O4, as displayed in Fig. 1(c). The shift and intensity of each Raman vibration mode are connected to the molecular vibration and bond length. No evident peak deviation was observed in the two strongest Raman vibration modes (V1 and V2) of EuNb1–X TaX O4. The results of the Raman spectra align with the situation indicated by XRD; that is no phase transition is detected, indicating that each sample crystallizes in the same m phase. 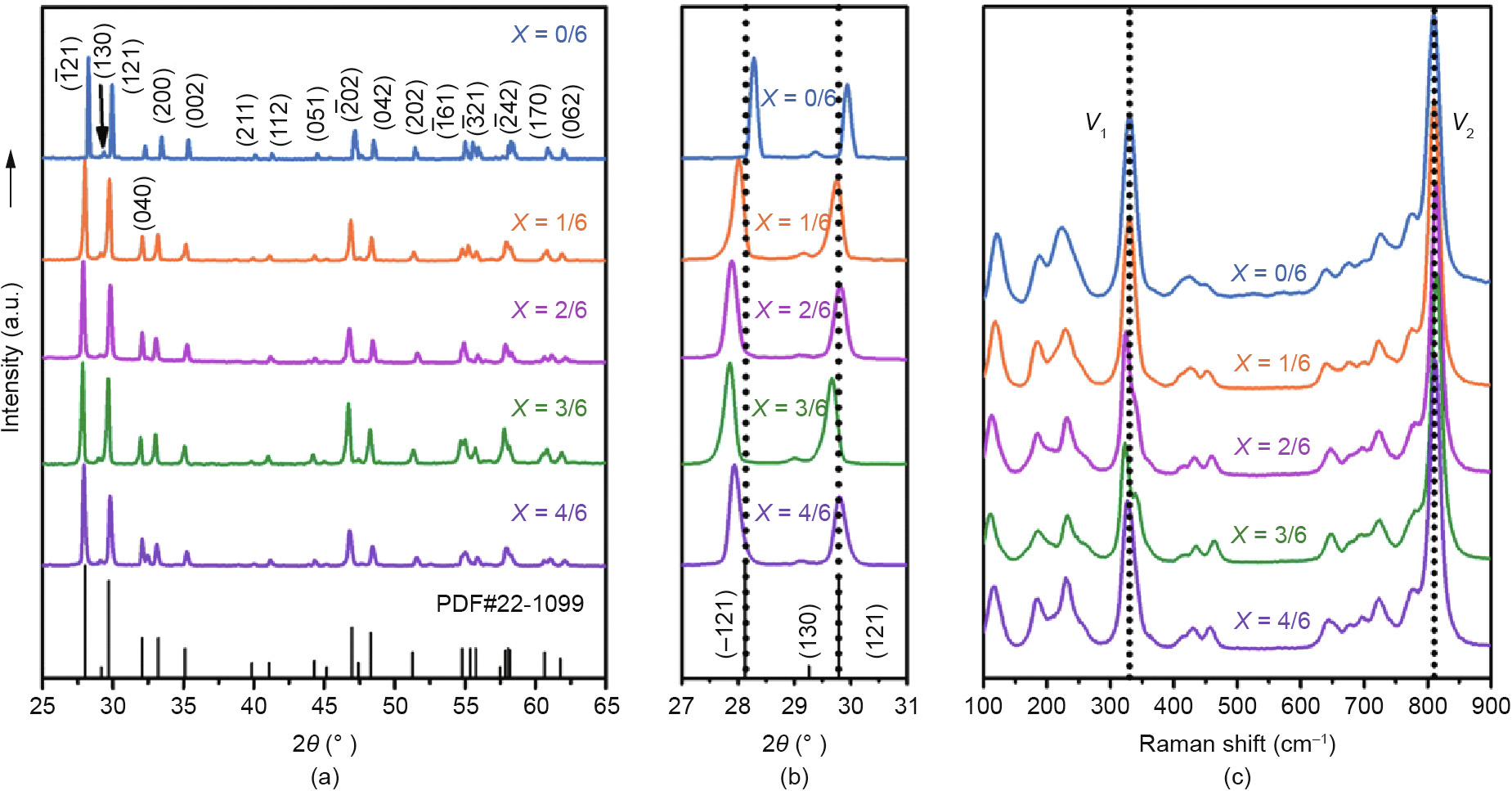 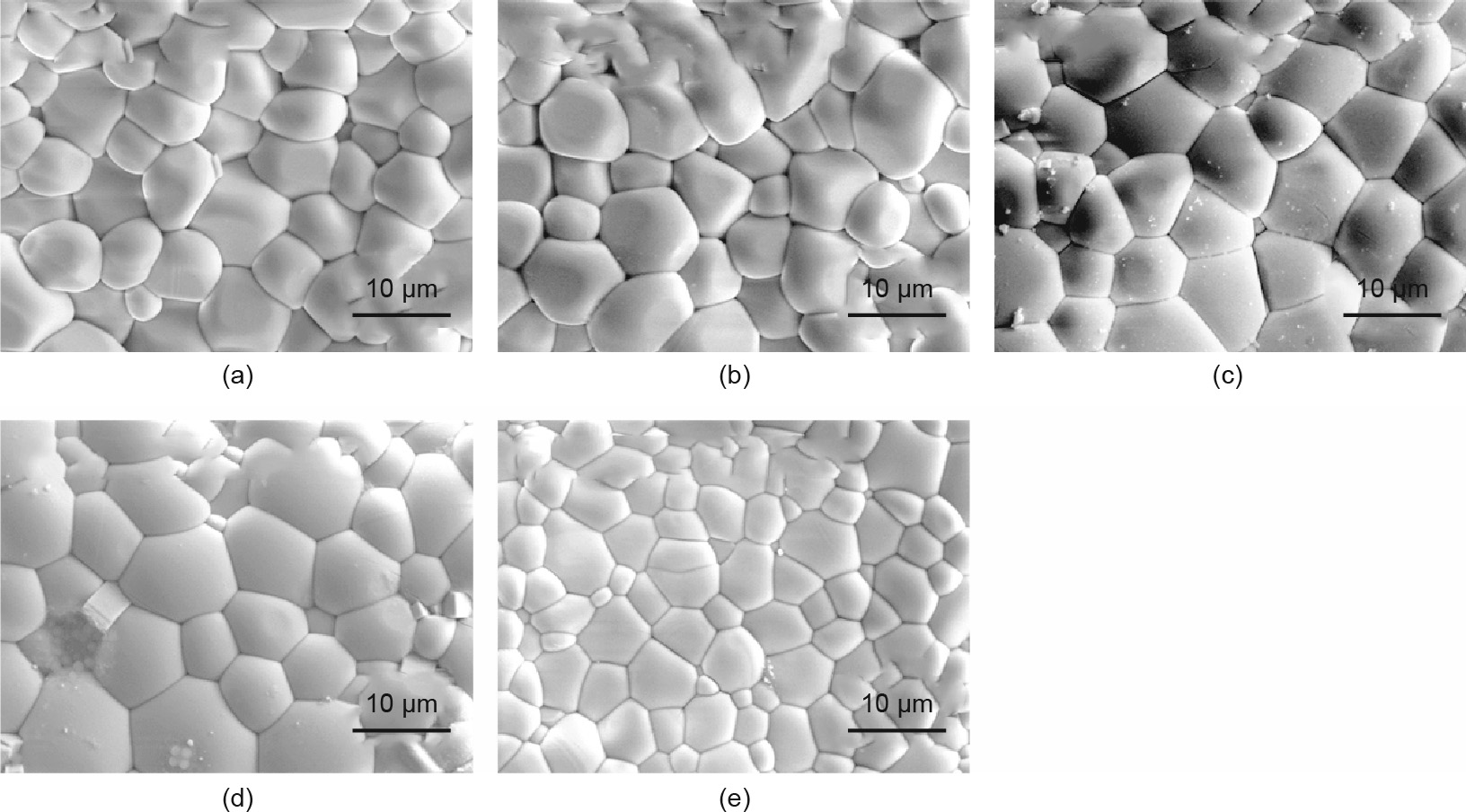 The data presented in Table 1 implies that the B -site substitution of Ta makes a notable difference to the mechanical properties of EuNbO4. The Young’s modulus of EuNbO4 is about 76 GPa, so the B -site substitution of Ta has led to an increase in the Young’s modulus. The highest Young’s modulus (169 GPa) is detected in EuNb2/6Ta4/6O4. A similar situation is observed in the bulk modulus, shear modulus, and mean acoustic velocity. The composition dependence of the elastic modulus and acoustic velocity of EuNb1–X TaX O4 is depicted in Fig. 3. When X

4/6. Thermal expansion of inorganic ceramics stems from inharmonic atomic vibration around the equilibrium position, which is characterized by the Grüneisen parameter. As shown in Table 1, the Grüneisen parameter of EuNbO4 has been increased by the B -site substitution of Ta, which agrees well with the composition-dependent TEC. Thus, it is believed that the TECs of EuNb1–X TaX O4 are governed by different factors with the variation of Ta content.

500 °C). No increase in thermal diffusivity or conductivity is detected for EuNb2/6Ta4/6O4, which is attributed to it having the best thermal radiation resistance. 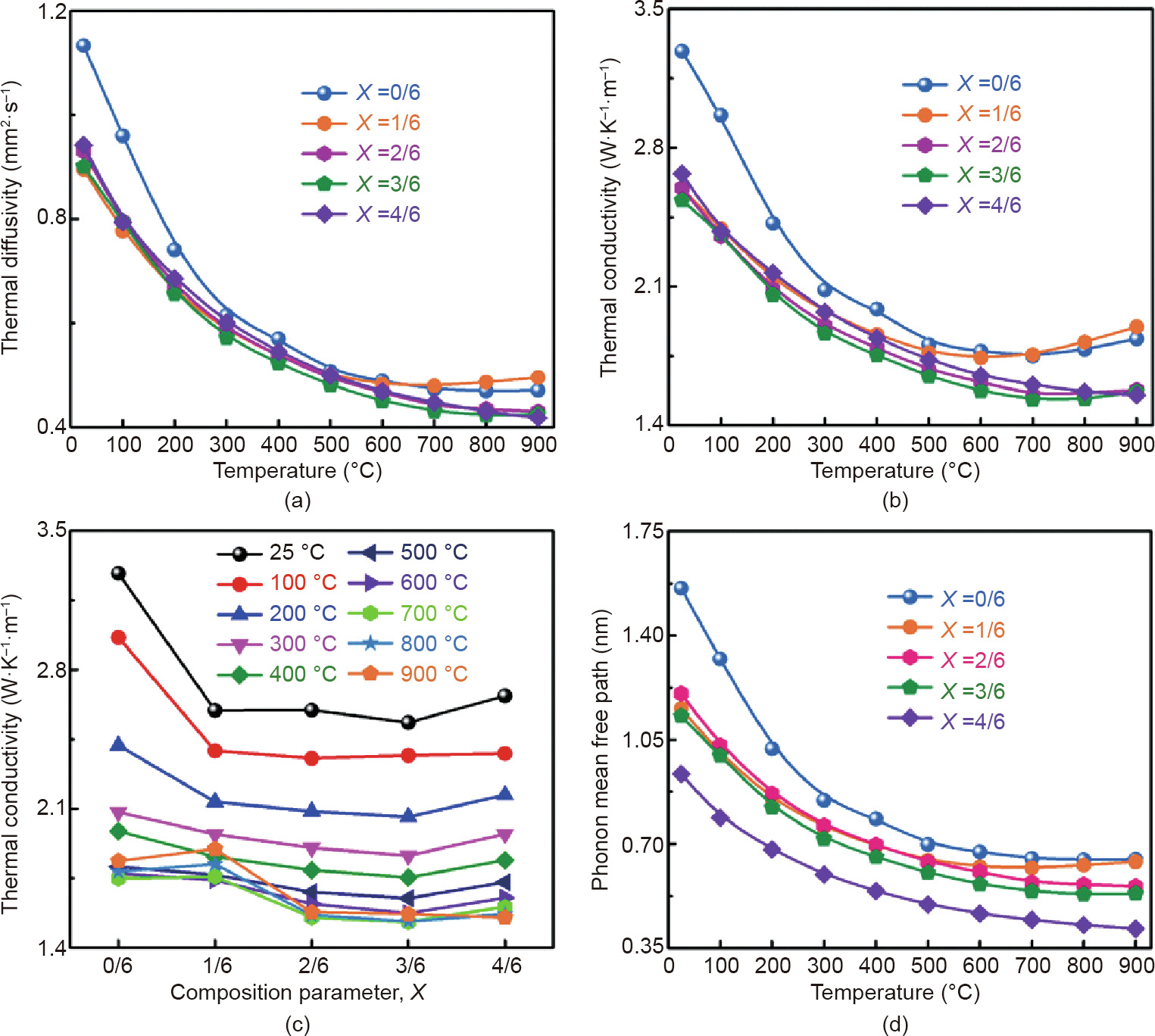 Thermal transfer is conducted via phonons—that is, lattice vibration—in insulators [28,29]. During phonon propagation, they are scattered via various processes, including Umklapp phonon– phonon scattering, different point defects scattering, grain boundaries scattering, and the other scattering processes [29–32]. The phonon mean free path (l ), which is restricted by the above processes, consists of different parts [29–32]:

are the phonon free paths derived from Umklapp phonon–phonon scattering, point defects scattering, grain boundaries scattering, and other processes, respectively [29–32]. Figs. 1 and 2 indicate that no phase transformation is detected, and that the grain size (microscale) is dozens of times greater than the size of phonon free path (nanoscale). Furthermore, the phonon scattering intensity caused by the grain boundary decreases with increase in temperature. Therefore, grain boundaries scattering can not decide the phonon mean free path. According to the chemical formula of EuNb1–X TaX O4, no vacancy is induced in EuNbO4 by the B -site substitution of Ta, as both Nb and Ta are pentavalent (+5). The Umklapp scattering degree is reflected via inharmonic lattice vibration. The inharmonic lattice vibration of EuNbO4 is enhanced by the B -site substitution of Ta, and the lowest value of the Grüneisen parameter is detected in EuNbO4 (Table 1). As the Grüneisen parameter increases with an increase in temperature, the thermal conductivity decreases with an increase in temperature. Furthermore, point defects are introduced, which are attributed to the atomic weight difference between Nb (92.9 g·mol-1 ) and Ta (180.9 g·mol-1 ). The effective ionic radius of Ta5+ and Nb5+ with four ligands is equal (0.064 nm); the phonon scattering caused by the ionic radius difference is therefore omitted. Normally, the misfits of atomic weight and ionic radius reach the maximum value when X is 3/6 in the substitution process [25,30,32–34]. Hence, the lowest thermal conductivity of EuNb1–X TaX O4 is detected in EuNb3/6Ta3/6O4. The phonon scattering process sketch map of EuNb3/6Ta3/6O4 is displayed in Fig. 6, in which Ta atoms are the strongest phonon scattering sources. First, the B -site substitution of Ta causes an atomic weight difference, as Ta atoms are much heavier than Nb atoms. Second, the introduction of Ta increases the total unit cell weight and crystal structure complexity. The work by Clarke [35] proves that the thermal conductivity decreases with an increase in unit cell weight and crystal structure complexity. Third, the Ta and Nb atoms are centered by four O atoms to form TaO4 and NbO4 tetrahedrons. Phonons are scattered via a cage-like structure to reduce the thermal conductivity, which has been reported in various ceramics [32,36,37]. The complex crystal structure and cage-like structure are important reasons why EuNb1–X TaX O4 exhibits a low thermal conductivity. 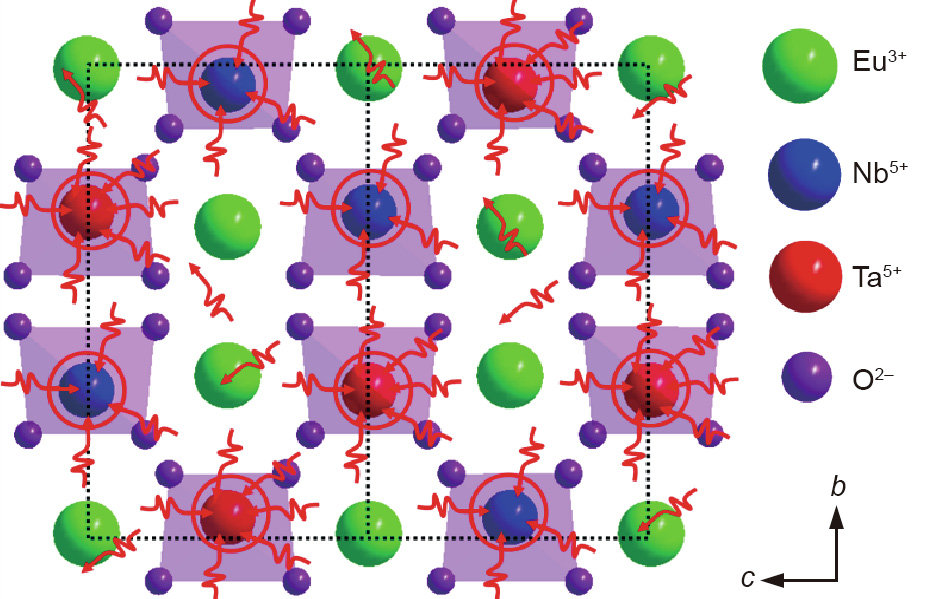 axis, b and c stand for the rest two axis.

[33–37]. Therefore, the temperature dependence of the thermal diffusivity is decided by the Umklapp phonon–phonon scattering process. The correlation between the temperature T and

is the Debye temperature, h is the Plank’s constant,

is the Boltzmann constant, m is the total weight per unit cell, V is the unit cell volume,

is a parameter before the exponential,

is the revised Debye temperature, and b is a constant set as 2. When the temperature is greater than

where C and D are parameters. Fig. 5(d) shows that the relationship between l and T clearly deviates from

at elevated temperatures due to the thermal radiation effect. To obtain the intrinsic lattice thermal conductivity of EuNb1–X TaX O4, the intrinsic phonon thermal diffusivity should be determined. Based on the relationship between

Eq. (16) indicates that the reciprocal thermal diffusivity increases with an increase in temperature, when no thermal radiation effect occurs. Fig. 7(a) shows that

follows the relationship expressed in Eq. (16) at low temperature. However, when the temperature is greater than 600 °C, 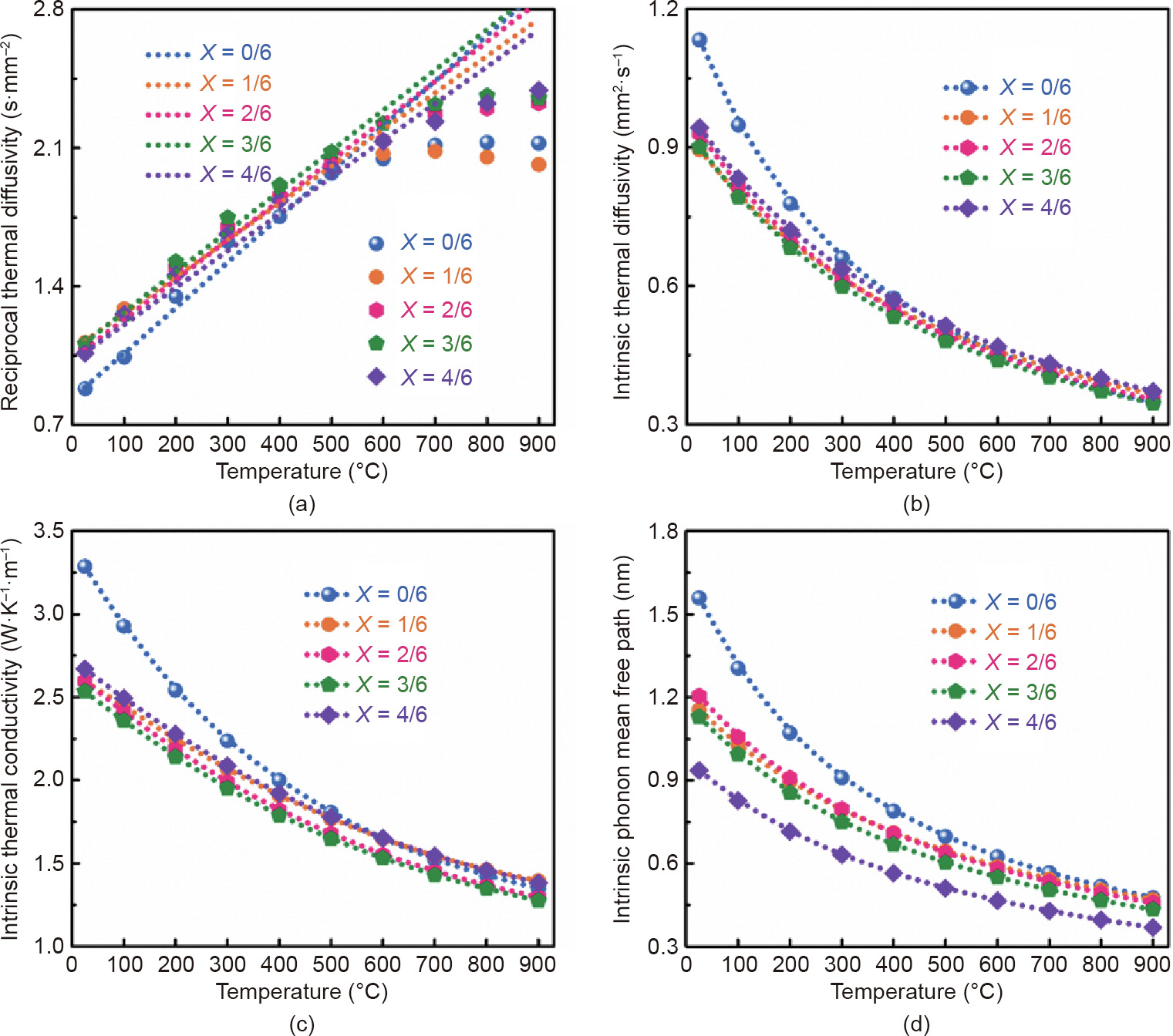 The thermal and mechanical properties of EuNbO4 synthesized via a SSR have been successfully optimized by the B-site substitution of Ta. The highest TEC reaches 11.2 × 10-6 K-1 at 1200 °C (EuNb3/6Ta3/6O4), attributed to crystal structure relaxation and the enhancement of inharmonic lattice vibration strength. The highest Young’s modulus (169 GPa) is detected in EuNb2/6Ta4/6O4, as the Ta–O bond strength is much greater than that of the Nb–O bond. The minimum experimental thermal conductivity (1.52 W·K-1·m-1 , 700 °C) is found in EuNb3/6Ta3/6O4, due to the maximum misfit of atomic weight between Ta and Nb. The thermal radiation resistance of EuNb1–X TaX O4 is improved via the B -site substitution of Ta. The theoretical minimum thermal conductivity (0.78 W·K-1·m-1 ) of EuNbO4 indicates that the experimental thermal conductivity can be reduced further. It is clear that EuNb1–X TaX O4 exhibits lower thermal conductivity, lower Young’s modulus and greater TECs than the 7YSZ and La2Zr2O7 ceramics. The excellent material properties of EuNb1–X TaX O4 imply that EuNbO4 is a promising high-temperature TBC.

This research is under the support of the Natural Science Foundation of China (51762028 and 91960103) and the Materials Genome Engineering of Rare and Precious Metal of Yunnan Province (2018ZE019).

Lin Chen and Jing Feng declare that they have no conflict of interest or financial conflicts to disclose.