A new X-ray imaging technique can penetrate the layers of a computer chip and reveal its secrets—while keeping it intact. The method, called ptychographic X-ray laminography, should be useful for reverse engineering chips, verifying chip designs, and identifying counterfeits. It could also be useful in other branches of science and engineering for zooming in on the three-dimensional (3D) structure of any sample with a planar geometry.

"What’s novel is that you don’t have to slice the chip to examine it,” said Gabriel Aeppli, of the Paul Scherrer Institute (PSI) in Switzerland and professor of physics at the Swiss Federal Institutes of Technology in Zurich and Lausanne. Aeppli, along with Mirko Holler of PSI and Tony Levi of the University of Southern California in Los Angeles, led the team that developed the new technique.

Typically, probing a chip’s design or reverse engineering it requires peeling away each layer of the chip, and examining it with a scanning electron microscope (SEM). "The classical methods require you to effectively go layer by layer and expose each layer sequentially—essentially destroying everything above it,” said Jason Abt, vice president of operations at TechInsights, a semiconductor reverse-engineering company in Ottawa, ON, Canada. A SEM’s small field of view could also require tens of thousands of images to cover just one chip.

The new method, described in a paper published in October 2019 in the journal Nature Electronics, can not only create a 3D map of a chip without destroying it, but also features a wide field of view with the ability to zoom in [1].

"The beauty of the technique is the 'zoom’ capability analogous to what is possible with light microscopes,” said Jerry Hastings, a professor of photon science at SLAC National Accelerator Laboratory in Menlo Park, CA, USA, who did not participate in the research.

In the new work, no carving or cutting is needed. Angling the X-ray beam with respect to the surface of the rotating chip—a geometry characteristic of laminography—allows enough of the X rays to reach all parts of the chip. After polishing the chip’s substrate down to a thickness of 20 μm, the researchers used their technique to reach a resolution of 18.9 nm on a chip made with 16 nm technology (Fig. 1). 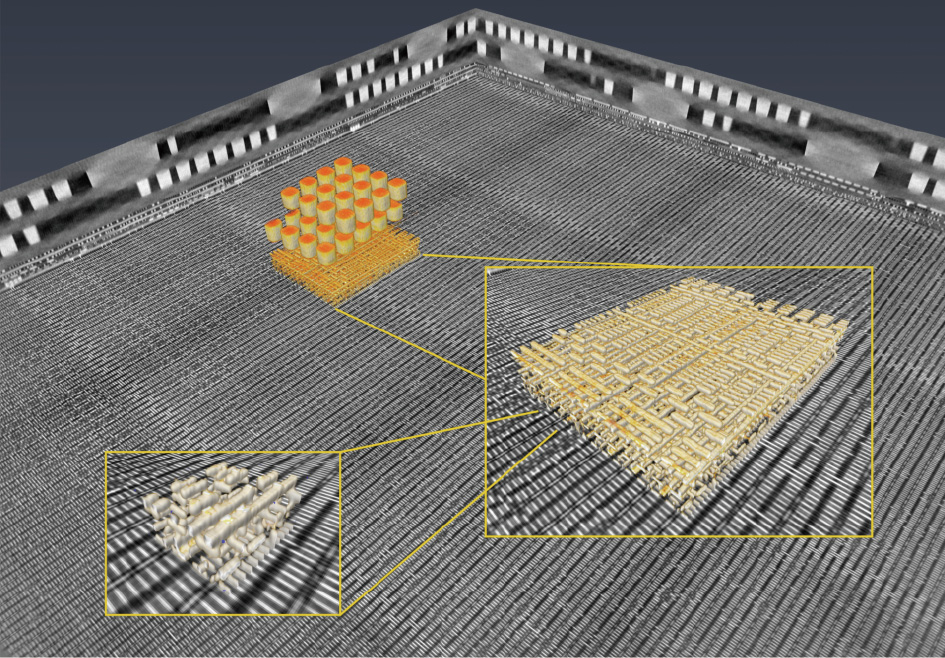 Fig. 1. An image derived from ptychographic X-ray laminography dataset shows, in grayscale, a 3D, virtual slices representation of an integrated circuit chip, with the lowest layer visible as well as the stacking of the layers to larger structures. 3D volume renderings are shown in color at various magnifications. The resolution of the dataset is 18.9 nm. Credit: Paul Scherrer Institute, with permission.

The nondestructive nature of the new method would be especially advantageous when chip samples are rare, Abt said. For example, when only a few samples exist to reproduce a unique older chip whose design files had been lost. Or with a handful of specially made chips, to verify the designs or check that no hardware trojans were installed. It could also prove useful for identifying counterfeit chips, which have long infiltrated the supply chain (the US military, for example, has estimated that 15% of spare and replacement parts for its equipment—including integrated circuits—are counterfeit, raising the risk of dangerous malfunctions [3,4]).

But examining integrated circuits is only one application. The technique could be useful for imaging any sample that can be prepared in a flat geometry. For example, researchers have already used it to probe magnetization in materials, important for developing magnetic sensors and storage devices [5]. Scientists studying how the brain works could examine brain tissue without having to go through a sample slice by slice. The method could also examine lithium-ion batteries. Finger-like structures called dentrites can grow from the lithium metal anode, potentially causing a short circuit. High-resolution images could better reveal how dentrites form and help engineers design longer-lasting batteries.

The imaging technique has at least one potential limitation. It requires an X-ray source like a powerful synchrotron; the researchers used the Swiss Light Source at PSI. Although more than a dozen such machines are scattered throughout the world, one may not always be accessible, said Junjing Deng, a physicist at Argonne National Laboratory in Argonne, IL, USA, which houses the Advanced Photon Source.

Soon, upgraded machines that generate brighter X rays could improve the method’s resolution and boost its speed, Deng said. The demonstration on a computer chip reported by Aeppli and collaborators required an initial wide-field scan that took 30 h, followed by a zoom-in scan that took another 60 h, which covered a volume of 40 μm × 40 μm × 4 μm [1]. The researchers suggest that a resolution of 2 nm in the same imaging time, or imaging of a 300 μm × 300 μm chip at a resolution of 50 nm in 3 h could be achieved with further improvements in the technique and using an upgraded source like the Linac Coherent Light Source II at SLAC National Accelerator Laboratory, with its brightness scheduled to be boosted 100 times in Fall 2020 [1,6].

Other upgraded machines include the recently commissioned Extremely Bright Source at the European Synchrotron Radiation Facility in Grenoble, France (100 times more brilliant) [7], and, in 2022, the Advanced Photon Source at Argonne (100–1000 times more brilliant) [8]. And new, more powerful machines like the High Energy Photon Source in Beijing and new X-ray free electron laser facilities in Shanghai are being built [9,10].