Will Cryptocurrencies Break the Energy Bank?

Bitcoin is just over a decade old, and estimates suggest it already consumes more energy than many countries [1]. The electricity use and potential environmental impact of Bitcoin and similar cryptocurrency systems alarm some experts and in 2019 prompted China to propose a ban on cryptocurrency mining—although the Chinese government later decided not to follow through [2].

However, a well-publicized paper recently posted (August 2019) on the pre-print server arXiv describes a novel algorithm for securing digital transactions that would require little energy [3,4]. It is just one of hundreds of proposals for cutting cryptocurrencies’ electricity demand. While many of these possible solutions remain under study, some are already being implemented. For example, Ethereum, the second largest cryptocurrency system, has announced it will switch to a different procedure for processing transactions that will cut its energy use by 99% [5].

But experts caution that these alternatives have not undergone the same rigorous evaluation as Bitcoin’s procedure, and whether cryptocurrency users will accept them remains unclear. ‘‘There are many proposed protocols with a mathematical proof of security, but these all depend on assumptions which are different than those for Bitcoin,” said Joseph Bonneau, an assistant professor of computer science at New York University. “It is not clear if they will hold up in practice.”

Bitcoin and other cryptocurrency platforms bypass the traditional financial system, which relies on banks and other institutions to confirm transactions, and instead enlist the users of their networks to do so. Certain users, known as miners, compete with each other to process a group of transactions, and after each group receives approval it joins a digital ledger known as a blockchain [9]. To validate a group of transactions, miners must solve a cryptographic problem, providing what is known as “proof of work” [10]. The winning miner receives a financial reward, generally in the form of newly minted cryptocurrency

Bitcoin and most other cryptocurrency systems ensure their security and integrity through proof of work, but the process also accounts for their sizeable power consumption. The cryptographic problems needed to add groups (or “blocks”) of transactions to the digital ledger are designed to be solved by trial and error, with the brute force calculations often performed by specialized computer systems, known as mining rigs, that may be deployed in banks of thousands of machines (Fig. 1) [11,12]. 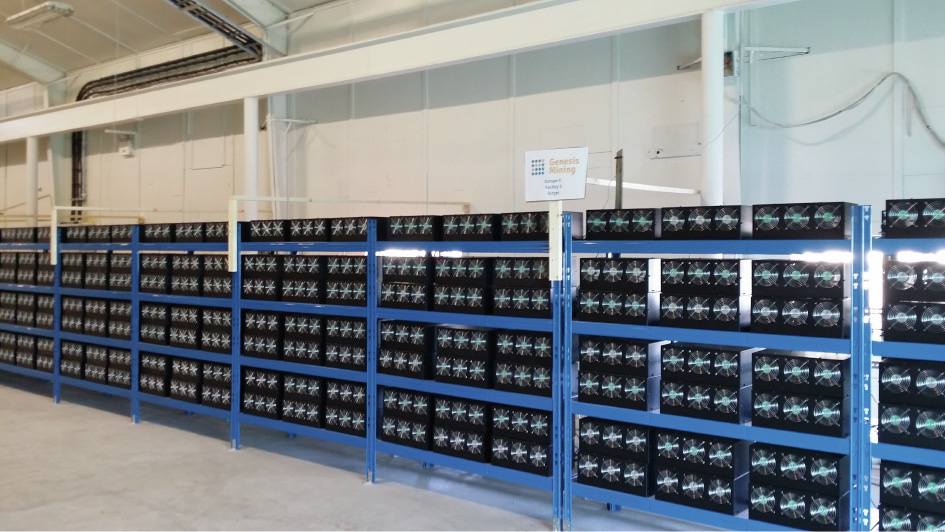 Fig. 1. The cryptographic problems needed to process blocks of cryptocurrency transactions are so difficult they have to be solved by trial and error, often by specialized computer systems, known as mining rigs, that may be deployed in banks of thousands of machines, like these in a cryptocurrency mining farm in Iceland. The energy consumption of this computing activity is substantial, estimated by some studies to equal that of entire countries. Credit: Marco Krohn, Wikimedia Commons (CC BY-SA 4.0).

The environmental impacts of cryptocurrencies go beyond the amount of electricity needed to power computers. Because rigs generate so much heat, they may need additional power for cooling, and they also increase the generation of electronic waste [13].

Because cryptocurrencies are decentralized, calculating the environmental effects of mining, particularly its energy use, has proven difficult. "We do not have official statistics on the number of miners and the energy efficiency of their rigs,” said Eric Masanet from the Bren School of Environmental Science & Management at the University of California, Santa Barbara. As a result, estimates of power use vary widely [14]. Depending on the study, Bitcoin’s energy consumption in 2017 could have been as high as 44 TW or as low as 4 TW [15].

Despite their different conclusions, the studies collectively confirm that cryptocurrency mining consumes substantial amounts of power. For example, in 2018 Max Krause, an environmental engineer with the US Environmental Protection Agency (EPA), and a colleague estimated the values for four cryptocurrency platforms, including Bitcoin and Ethereum, using the hash rate, which indicates the number of calculations miners’ rigs are performing [15]. "When I started running the numbers, the energy costs were astronomical,” said Krause, who cautions that the study was not part of his work at the EPA. The results suggested that in 2017 the four cryptocurrency networks used 16.6 TW of power, about the same annual amount as Slovenia or Cuba [15].

The Cambridge Centre for Alternative Finance (CCAF) in the United Kingdom has produced well-regarded estimates of Bitcoin’s power use with a model that incorporates hash rates, payouts to miners, the efficiency of mining rigs, and other variables. CCAF’s current most likely estimate for Bitcoin’s annual energy draw is about 84 TW per year, or about 0.4% of the world’s electricity consumption [16]. That means the network’s current annual power use is between that of Finland and Pakistan. The center’s data also show that Bitcoin’s energy consumption has been rising rapidly, increasing more than 11 folds from the beginning of 2017 to the end of 2019.

The environmental impact of this power consumption depends on a variety of factors, including the electricity source. Renewable sources, which could reduce mining’s effects on climate, are already important for cryptocurrencies. As economist Michel Rauchs of the CCAF has noted, up to one-half of Bitcoin mining is estimated to take place during the rainy season in Sichuan Province in China, where miners can take advantage of surplus hydropower [17]. Cheap, abundant hydropower has also drawn cryptocurrency mining facilities to areas such as the Pacific Northwest in the United States and Quebec in Canada [18,19]. At least one location, Missoula County, Montana, in the United States now requires that new operations have a source of renewable power [20]. Still, just how much energy for cryptocurrency mining comes from renewable sources remains a controversial subject [21].

Another approach for curbing the energy use and environmental consequences of cryptocurrency networks involves altering how they function. There is no shortage of ideas, said Bonneau. For example, Bitcoin and many other cryptocurrency systems require that users reach consensus to decide the validity of each transaction—which entails the energy-demanding proof-of-work process. The previously mentioned study published last year in arXiv by computer scientist Rachid Guerraoui of the Ecole Polytechnique Fédérale de Lausanne in Switzerland and colleagues suggested abandoning the requirement for consensus [3,4]. Instead, they proposed that a system could be as secure and consume a great deal less energy by confirming transactions with a random sample of network members.

But this proposal, like most schemes for cutting cryptocurrency energy consumption, remains untested. Several small cryptocurrency systems, including Dash and Peercoin, do already use an energy-saving alternative known as "proof of stake” rather than proof of work. These networks still rely on blockchain. But a subset of users, chosen by their stake in the system—that is, how much of the cryptocurrency they hold—decides whether each transaction will be confirmed. Because proof-of-stake systems do not involve mining, they require much less power.

In its effort to reduce its energy consumption, Ethereum is in the process of switching from proof of work to proof of stake [5]. Whether other cryptocurrency systems will follow suit remains to be seen. Bitcoin and other proof-of-work networks could not make the change without agreement from their users—and with these networks worth hundreds of billions of dollars, it is not clear that users would take the risk, said Rauchs. "A lot of theoretical reports say that proof of stake is as safe as proof of work,” he said. "But it has not been battle-tested—it may not have the same security assurances as proof of work.” Agreeing, Bonneau said that "there still is not a proven way” to secure a decentralized blockchain like Bitcoin’s without using large amounts of energy. "By ‘proven’ I mean proven in the real world with stakes as high as they are for Bitcoin,” he said.