Cereal crop plants, which provide human societies around the world with a large proportion of their daily carbohydrate requirements, are subject to continual attack by potentially pathogenic fungi. The fungi can penetrate the outer layers of plants in a number of ways, but plants will usually resist infection. However, in some cases, the fungi will overcome the plant’s defenses and establish infection. When agriculturally important plant species succumb to pathogen attack, the resulting reduction in yields or complete destruction of the crop can have devastating social, environmental, and financial effects on national and international communities. During the co-evolution of plants and pathogenic fungi, plants have developed a range of defense strategies against fungal infection, while the fungi, in parallel, have developed new tactics to achieve penetration and infection, and/or to overcome the existing resistance mechanisms of plants. This constant battle for supremacy continues today, and a key and continual objective in cropimprovement programs around the world is to provide plants with an (at least temporary) advantage over the fungi.

Thus, plant survival in nature has been inextricably linked with the plants’ ability to invoke strategies such as physically blocking fungal penetration, reinforcing the cell wall, producing hydrolytic enzymes that degrade the cell wall of the invading fungus, and synthesizing a range of antimicrobial molecules [1,2] (Lv et al., this issue; Hua et al., this issue). Penetration can be blocked or inhibited by the deposition of callosic papillae. Pathogenesis-related (PR) proteins can be produced by plants in response to microbial attack, and include enzymes that degrade the chitin and the (1,3)- and (1,3;1,6)-β-glucans of the fungal cell wall [3,4]. Overexpression of these hydrolytic enzymes has been used successfully to enhance the resistance of crop species for many years [5,6]. In addition, oligosaccharide products released by these enzymes from fungal cell wall polysaccharides, including N-acetylchitooligosaccharides and (1,3)-β-oligoglucosides, can stimulate secondary responses in the plant that will contribute further to resistance [7–9].

This article is largely limited to the roles played by the callosic papillae of plant origin in plant–pathogen interactions, together with the possible roles of associated polysaccharides and enzymes involved in the biosynthesis and degradation of these polysaccharides. A major constituent of the papillae is the essentially unbranched polysaccharide (1,3)-β-glucan, which is often referred to as callose. In addition to its role as a component of papillae, callose performs a range of important functions during normal plant growth and development. It is found, inter alia, during cell plate formation, in pollen tubes, in pollen mother cells, and in plasmodesmatal canals [10]. Callose is not considered an integral component of the mature wall, but it can be found in specialized walls and in the periplasmic space between the plasma membrane and the wall [11]. In fungi, branched (1,3;1,6)-β-glucans are integral components of the cell wall and, indeed, represent the central core of the wall [12]. An increasing understanding of the roles of callosic papillae in plant–pathogen interactions is providing a range of new strategies and genetic targets for engineering enhanced disease resistance into important crop species such as wheat, rice, barley, maize, and sorghum.

It has been accepted for some time that glucan synthase-like (GSL) genes mediate the biosynthesis of callose in plants, although strong supporting evidence for this has been difficult to obtain. The GSL genes of plants are homologous with the FKS1 gene of yeast, which is responsible for the synthesis of (1,3)-β-glucan in the yeast Saccharomyces cerevisiae [13]. However, plant GSL proteins, which are members of the GT48 group of glycosyl transferases, do not contain the (D,D,D, QxxRW) uridine diphosphate glucose (UDPGlc) binding motif that is common to other glucan synthase enzymes of the glycosyltransferase family 2 (GT2 family) of glycosyl transferases (http://www.cazy.org/) [14], although other previously unknown UDP-Glc binding motifs might be present. Alternatively, an associated protein might provide UDP-Glc binding [15]. Li et al. [16] provided biochemical evidence that linked the HvGSL1 gene of barley with (1,3)-b-glucan synthesis. A partially purified (1,3)-β-glucan synthase preparation was separated in nondenaturing gels, where a protein of more than 250 kDa was shown to synthesize a (1,3)-β-glucan [16]. Similarly, a partially purified (1,3)-β-glucan synthase enriched from Lolium multiflorum extracts by product entrapment was able to synthesize a (1,3)-β-glucan of high molecular weight [17]. The GSL enzymes might also form part of a larger callose synthase complex (CSC) that contains a number of ancillary proteins and enzymes [18].

There are 12 GSL genes in the Arabidopsis genome, and silencing GSL genes or loss-of-function GSL mutants lead to reduced levels or the complete absence of (1,3)-β-glucan in various tissues [19,20]. The GSL genes vary greatly in size and can be up to 20 kilobases in length. The structures of the genes can be divided into two groups: One group is highly fragmented and may contain up to 40 introns, while the other group has 0–2 introns and is considerably shorter in length [19]. The GSL genes encode proteins of more than 200 kDa. These are located in the plasma membrane, where they often lie dormant until activated by mechanical stress or by an invading microorganism.

When plants are subjected to microbial attack, a common, rapid, and early response is the deposition of callosic plugs or plates close to the point of invasion [21]. These callosic deposits are known as papillae, and their bright fluorescent staining with aniline blue fluorochrome [22] has led to the general belief that the papillae contain (1,3)-b-glucan as their major carbohydrate component. The deposition of callosic papillae in close proximity to fungal penetration points can be seen in Fig. 1 [19]. The relative intensity and simplicity of aniline blue fluorochrome staining could be applied to high-throughput imaging for the resistance of individual plant lines (Makhija et al., this issue). 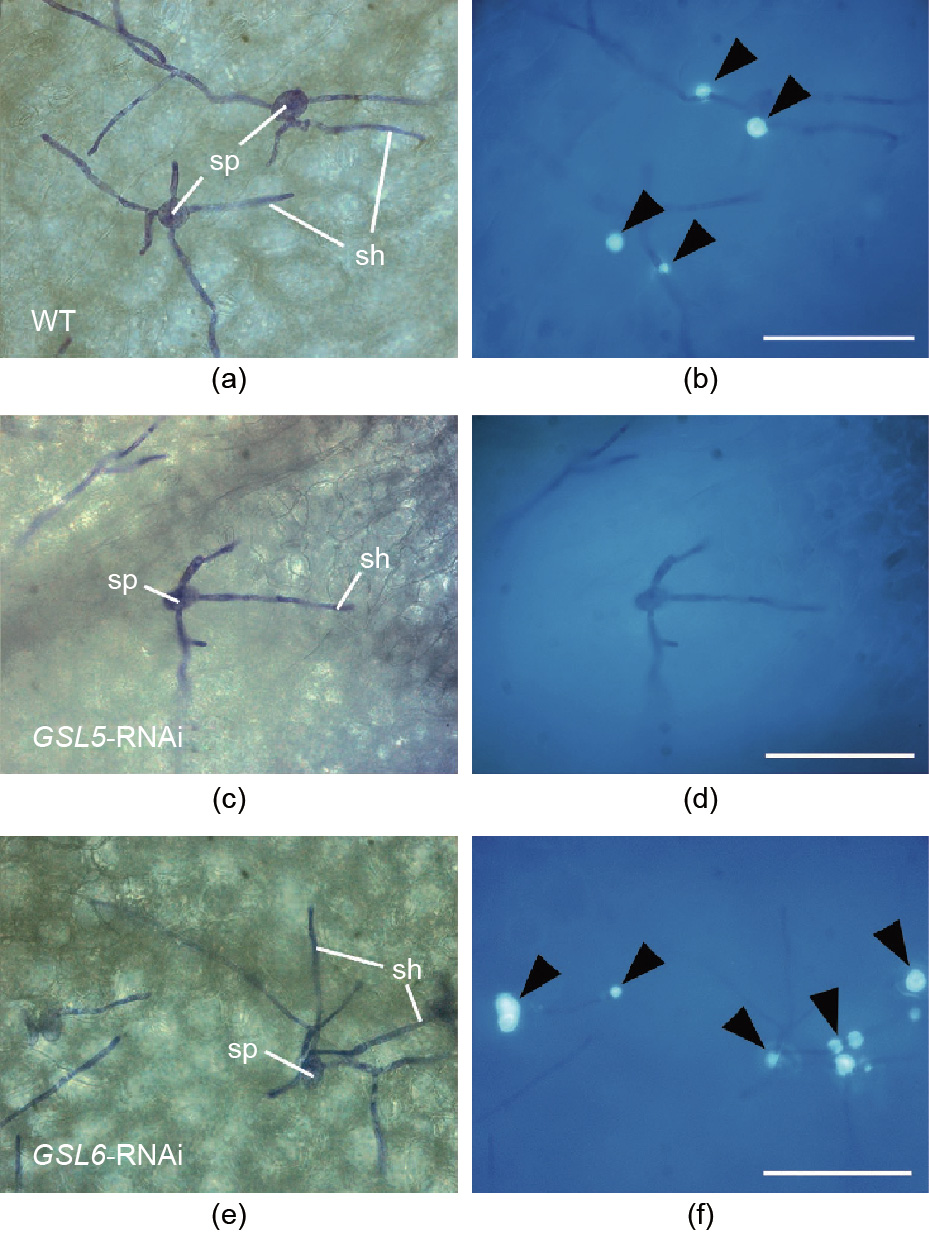 Fig. 1. Callosic papillae deposition. Young Arabidopsis leaves (WT) two days after infection with the powdery mildew fungus (Blumeria graminis). (a) Fungal spores (sp) and secondary hyphae (sh) are visible in wild-type lines and (b) a wild-type leaf stained with aniline blue fluorochrome shows the intense fluorescence of the callosic papillae. In a double-stranded RNA interference (dsRNAi) AtGSL5 knockout of Arabidopsis (c) the fungal spores and hyphae are still visible but (d) no callose is deposited. In a dsRNAi knockout line of a closely related but different gene (AtGSL6 ), (e) normal spores and hyphae are visible and (f) normal callosic papillae are present. Scale bar is 100 μm. Reproduced from Ref. [19] with the permission of The American Society of Plant Biologists, ©2003.

Traditionally, callosic papillae have been postulated to physically block or impede the penetration of potential microbial pathogens, but there is conflicting evidence with respect to this suggestion. Thus, when the HvGSL6 gene of barley was silenced by double-stranded RNA interference (dsRNAi), lower levels of callose accumulated and the plants became more susceptible to infection by the Blumeria graminis fungus [23]. In this case, it was possible to conclude that callose positively contributes to the resistance of barley to this fungal pathogen. In contrast, a loss-offunction callose synthase atgsl5 mutant from Arabidopsis, which is homologous to the HvGSL6 gene of barley, had no callose in papillae, but this was not correlated with the expected facilitated penetration of fungal structures. Counterintuitively, the plants became more resistant to several normally virulent fungal pathogens, rather than becoming more susceptible to fungal penetration, as was initially expected [19]. This result was attributed to the negative regulation of a salicylic acid defense-signaling pathway by callose or callose synthase [24]; when callose was absent, suppression of the salicylic acid pathway was released. Jacobs et al. [19] noted that not all members of the AtGSL gene family are involved in callose synthesis (Fig. 1). While these examples serve to emphasize the complexity of interacting disease-resistance mechanisms in plants, they also raise the possibility of using RNA-based biocontrol in crop protection (Bramlett et al., this issue).

《4. Other target polysaccharides in papillae》

4. Other target polysaccharides in papillae

As noted above, papillae observed in plant–pathogen interactions are traditionally believed to contain callose as their main polysaccharide component. However, there have been suggestions that papillae might also contain other polysaccharides, proteins, and phenolic compounds [25]. Chowdhury et al. [26] used a range of antibodies and carbohydrate-binding modules to show that the papillae formed in barley leaves following attack by the powdery mildew fungus Blumeria graminis f. sp. hordei (Bgh ) contained—in addition to callose—relatively high amounts of cellulose, arabinoxylan and phenolics. The phenolics were probably ferulic acid residues covalently associated with arabinoxylans. The researchers further showed that the concentrations of these three polysaccharides were higher in effective papillae than in ineffective papillae. The papillae had a layered structure, with an inner core consisting of callose and arabinoxylan and an outer layer containing arabinoxylan and cellulose (Fig. 2) [26]. 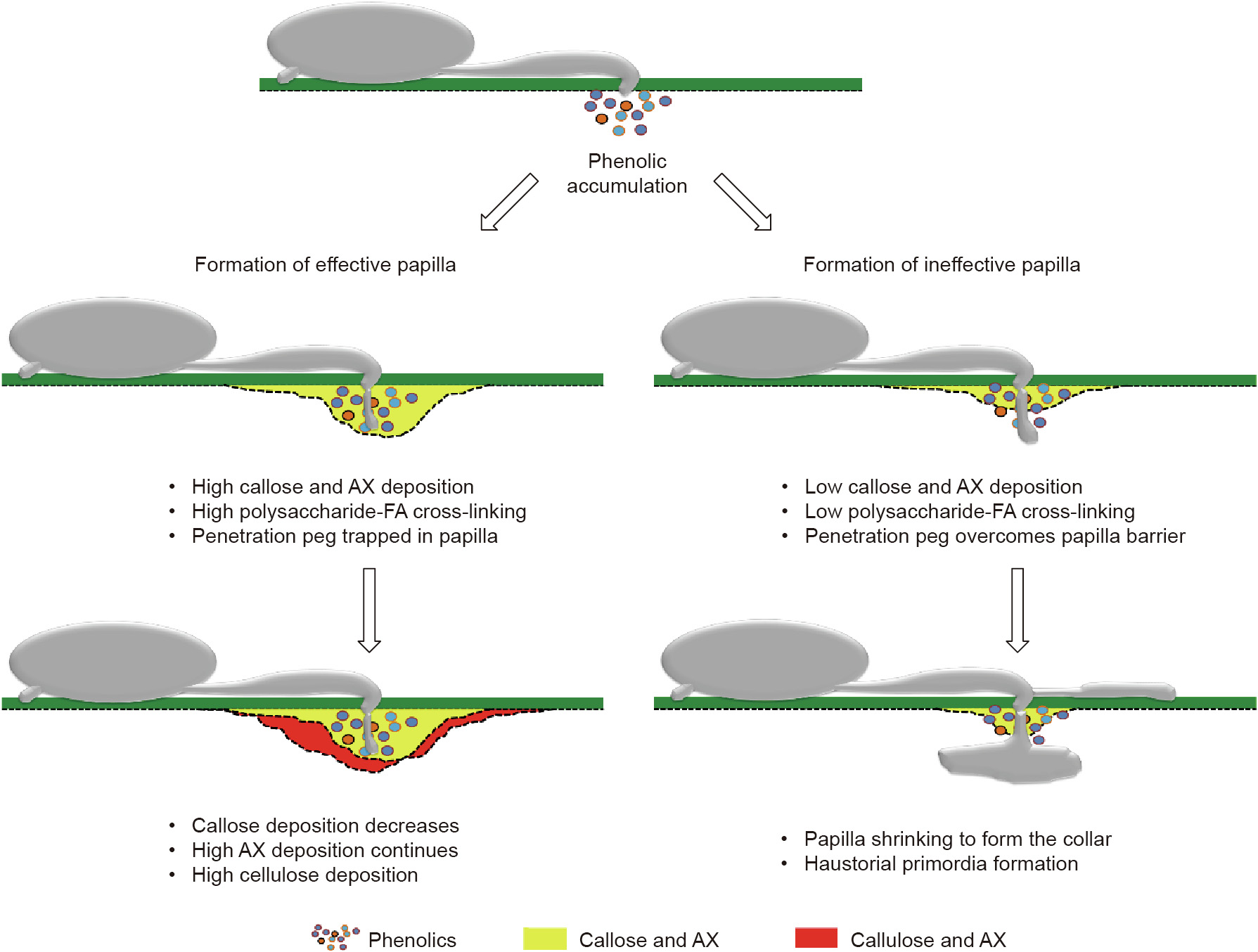 The association of arabinoxylan and cellulose with penetration resistance has opened up new targets for the improvement of papillae composition and enhanced disease resistance. Furthermore, it has now been demonstrated that the genes that have been implicated in heteroxylan biosynthesis do indeed affect resistance to Blumeria graminis penetration in barley [27]. Thus, the transiently induced silencing of barley GT43 and GT47 genes, both of which appear to be involved in heteroxylan biosynthesis, resulted in increased susceptibility to pathogen penetration, although overexpression of these genes had no apparent effect on disease resistance [27].

Despite the complexity of plant–pathogen interactions and the multiplicity of tactics used by plants to resist pathogen penetration and by pathogens to find a way around the many layers of protection that have evolved in plants, advancing knowledge of the composition and fine structure of papillae, coupled with a better understanding of the response mechanisms that occur in plants following microbial attack, is providing new target genes for the control of microbial diseases. Knowledge of these genes can now be exploited both in traditional breeding programs and in biotechnological approaches to enhance the resistance of important crop species to pathogen attack. Success in these areas of plant engineering will be crucial if we are to continue to increase crop productivity and hence to provide food for the burgeoning world population, under increasingly unfavorable climatic conditions.