The SpaceX rocket that lifted off from the Kennedy Space Center in Florida on 22 April carried a payload that worries many astronomers [1]. The 60 satellites that the rocket transported into space added to a population explosion of objects in low-Earth orbit. The number of orbiting satellites visible to the unaided eye has already doubled in just over a year, according to calculations by astrophysicist Jonathan McDowell of the Harvard–Smithsonian Center for Astrophysics in Cambridge, MA, USA. And the number of objects in low-Earth orbit could grow more than 10-fold this decade if SpaceX and other companies follow through on their plans to launch "mega-constellations” of hundreds or thousands of satellites [2].

These new satellites have already marred astronomical observations, and researchers expect the problems to get worse as more satellites are launched. Not all astronomers will be affected, said McDowell, but many will find their work more difficult, timeconsuming, and expensive—and they may have to redesign their equipment to compensate. Certain projects, including a major survey of the night sky set to begin in 2023, could suffer serious disruptions [3]. Although SpaceX recently announced changes to make the satellites less visible, astronomers say the objects will still interfere with observations. They are also concerned that the profusion of satellites will have a broader impact, altering the public’s perception of space. "It’s going to affect what the night sky looks like for every person on Earth,” said Cliff Johnson, a postdoctoral fellow in astronomy at Northwestern University in Evanston, IL, USA.

Satellites have been barging into astronomers’ images since Sputnik’s launch in 1957. "It has been an occasional annoyance,” said McDowell. "Every so often you would get an observation that was ruined by a satellite, but it has been rare.” To gauge how the new satellites might change the situation, he estimated the number of objects in low-Earth orbit [4]. Large objects orbiting below about 600 km tend to be bright, so they are visible to the unaided eye in dark areas and disrupt astronomers’ studies. McDowell calculated that in 2018 there were about 400 of these objects [4].

That number began to rise quickly in May of 2019 when SpaceX, the Hawthorne, California-headquartered company founded by billionaire Elon Musk, launched the first 60 of its Starlink satellites, which are designed to provide broadband internet access for much of the world [5]. SpaceX, which had deployed more than 400 of the satellites by the end of April 2020, won regulators’ approval to launch up to 12 000, and the company could ultimately have 42 000 of the satellites in service at any one time [6].

Other companies are getting into the act. London-based OneWorld has already launched 74 satellites and originally aimed to put around 650 into orbit [7]. Whether the company will meet that goal is unclear because it declared bankruptcy in March [8]. However, several other companies, including Amazon, hope to create their own mega-constellations [9].

The vast number of new satellites is one concern for scientists. As one astronomer put it, the night sky will be "crawling” with objects once the mega-constellations have been launched [10]. The satellites launched so far are also worrying because they are so bright. Research professor (emeritus) of astronomy Patrick Seitzer at the University of Michigan in Ann Arbor, MI, USA noted that the Starlink satellites are large and reflective, and the first group orbits only 550 km above the Earth’s surface. As a result, he said, ‘‘the satellites are brighter than 99% of anything in orbit now,” and they are visible to the unaided eye in areas without heavy light pollution.

Seitzer serves on an American Astronomical Society committee that is studying the satellite issue, and he described their possible effects at the organization’s conference in January [11]. He said that the light from the satellites can saturate the detectors researchers use to capture images of the night sky. That means that instead of leaving thin streaks that spoil only a few pixels of an image, the light spills over and obscures more of the exposure. Light from the satellites can cause other problems as well, including ghost images on other parts of an exposure and residual images that show up on later exposures, Seitzer said.

More than 9000 Starlinks are planned to orbit below 600 km, but 2800 are scheduled to operate at an orbital altitude of around 1200 km—although SpaceX has applied for permission to station them in a lower orbit [12]. The OneWeb satellites also orbit at around 1200 km [13]. At these higher altitudes, the satellites would not be visible to the unaided eye, said Seitzer. But they would still be bright enough to saturate astronomical detectors, and they could be more disruptive because three to four times more of them would be visible at any particular time, he calculated [11].

Analyses by Seitzer, McDowell, and other scientists suggest that the impact of the satellite surge will depend on several factors, including observers’ latitude, what time of night and what season of the year they are collecting data, and what questions they are investigating. Johnson and his colleagues are observing galaxies such as the Magellanic Clouds to study star formation and hunt for undiscovered dwarf galaxies, and Starlinks have already left traces on some of their images (Fig. 1). Still, he said that the satellites would not have a major impact on the group’s research. ‘‘We are doing multiple observations, so we can average out the loss of pixels” when a satellite crosses one of their images. 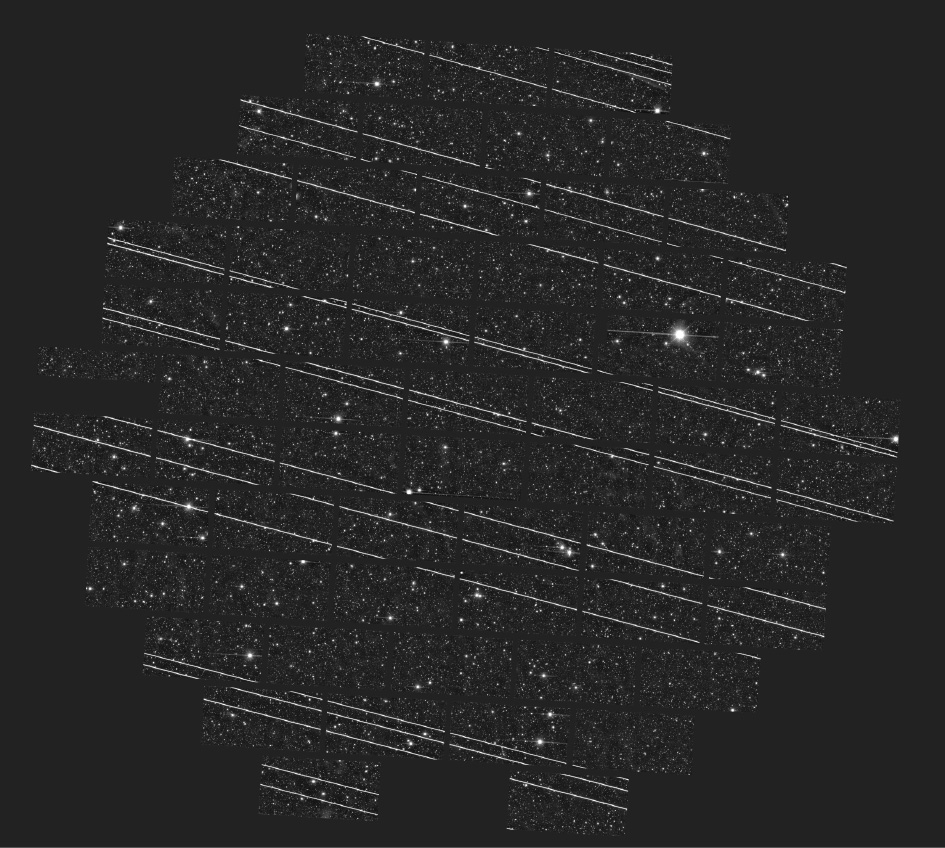 Fig. 1. On 18 November 2019, Starlink satellites streaked this image captured by the Blanco telescope at the Cerro Tololo Inter-American Observatory in Chile. During an exposure of 333 s, 19 of the satellites passed through the telescope’s field of view. The satellites had been launched the week before and were moving to their final orbital altitude of 550 km. Credit: DELVE Survey, CTIO/AURA/NSF, with permission.

The satellites could hamper other studies, however. In three years, scientists working at the Vera C. Rubin Observatory, which is under construction in Chile, will launch the Legacy Survey of Space and Time, a ten-year project to capture the most detailed view of the night sky. The observatory’s telescope has an enormous field of view of 9.62 square degrees, more than 40 times the area of the full Moon [14]. It can spot objects that are ten million times fainter than our eyes can detect, and this combination of sensitivity and breadth of view makes it particularly vulnerable to satellite intrusions [10]. Researchers with the project estimate that up to 30% of the images from the telescope will contain a satellite trail and that the survey could require an extra four years to complete because of data loss due to the objects [15].

Efforts to identify and track asteroids, which is one of the Vera C. Rubin Observatory’s aims, could also suffer. The Starlinks currently aloft are easiest to see just after sunset and just before sunrise, which are also the best times to detect asteroids, McDowell said. "You really do not want to miss the asteroid that is going to hit Earth,” he said.

SpaceX has responded to astronomers’ complaints and in April announced major changes to reduce the satellites’ impact [16], although the changes will not alter the Starlinks already launched. To prevent new Starlinks from standing out as they climb into orbit, SpaceX will now reorient them so that they are edge-on to the Sun as they ascend, reducing the amount of light they reflect. Once in orbit, all future satellites will deploy visors to reduce their reflectivity. For observers watching the sky with the unaided eye, these changes should mean that the satellites, which were most obvious shortly after launch, should disappear within a week, according to the company [16].

Astronomers welcome SpaceX’s announcement, but caution that the proposals only go so far. "The changes will make the satellites fainter and make fewer of them illuminated late in the night,” said McDowell. The new SpaceX approach "improves but does not eliminate” the potential satellite problem, he said.

Johnson and other researchers said that SpaceX and OneWeb—which interacted with astronomers before it declared bankruptcy—deserve credit for their efforts to address the problem. But they would also like to see new regulations to ensure that satellite operators protect the night sky. "There has to be a mechanism for them to do the right thing,” said Johnson.