Conventional synthetic aperture radar (SAR) interferometry (InSAR) is a powerful tool that can measure precise surface deformation over a large area of greater than 1000 km2 . The technique has been successfully applied to earthquake deformation [1–6], volcanic deformation [7–11], glacier movement [12–15], land subsidence [16–19], temporary and seasonal wetland water-level variation [20,21], and so forth. However, because the InSAR method can only observe one-dimensional (1D) deformation in the satellite’s line-of-sight (LOS) direction, along-track (AT) deformation measurement is nearly impossible using this method.

However, multiple-aperture SAR interferometry (MAI) was proposed by Bechor and Zebker [22] and further improved by Jung et al. [23–26]. The MAI method enables precise measurement of 1D surface deformation in the AT direction. This method overcomes the limitation of the InSAR method. MAI processing includes the following steps: ① generation of a forward-looking differential interferogram using the forward-looking Doppler spectrum; ② generation of backward-looking differential interferograms using the backward-looking Doppler spectrum; and ③ creation of an MAI interferogram by estimating the phase difference of the two interferograms. It is well known that MAI performance is several times better than that of azimuth offset tracking [22–26].

Two-dimensional (2D) surface deformation can be precisely measured from one interferometric pair using InSAR and MAI integration. Moreover, the integration enables the observation of three-dimensional (3D) deformation using the ascending and descending interferometric pairs. The feasibility of the SuperSAR multi-azimuth SAR system has been tested for precise 3D deformation measurement [27]. 3D retrieval has been widely used to measure volcanic deformation [8,9,28–32], co-seismic deformation [4,5,33–38], glacier movement [39,40], and more. The archived 3D measurement performance using an X-band Constellation of Small Satellites for the Mediterranean Basin Observation-SkyMed (COSMO-SkyMed) InSAR and MAI integration method in the east, north, and up directions was approximately 0.86, 1.04, and 0.55 cm, respectively [29]. However, 3D deformation retrieval remains challenging in large and complex deformation areas due to MAI coherence loss and InSAR phase unwrapping error.

Recently, Jung et al. [26] introduced forward- and backwardlooking residual interferograms to reduce the phase noise level. As a result, the method largely enhanced MAI coherence, particularly for decorrelated areas because of large and complex deformation. Baek et al. [41] introduced the multi-kernel offset tracking method [13,15,42] to minimize the phase unwrapping error in high steep deformation areas. They showed that the Advanced Land Observing Satellite-2 (ALOS-2) Phased Array-type L-band Synthetic Aperture Radar-2 (PALSAR-2) offset maps estimated using the multi-kernel offset tracking method are as precise as those used to minimize the phase unwrapping error. Because InSAR measurement is not available in large and complex deformation areas but the offset map is valid, it is possible to measure the LOS deformation using the multi-kernel offset trackingmethod. The integration of the improved InSAR and MAI measurements enables precise mapping of 3D deformation even in areas that are decorrelated because of large and complex surface deformation. However, this method of integration had never been applied to generate a 3D deformation map. 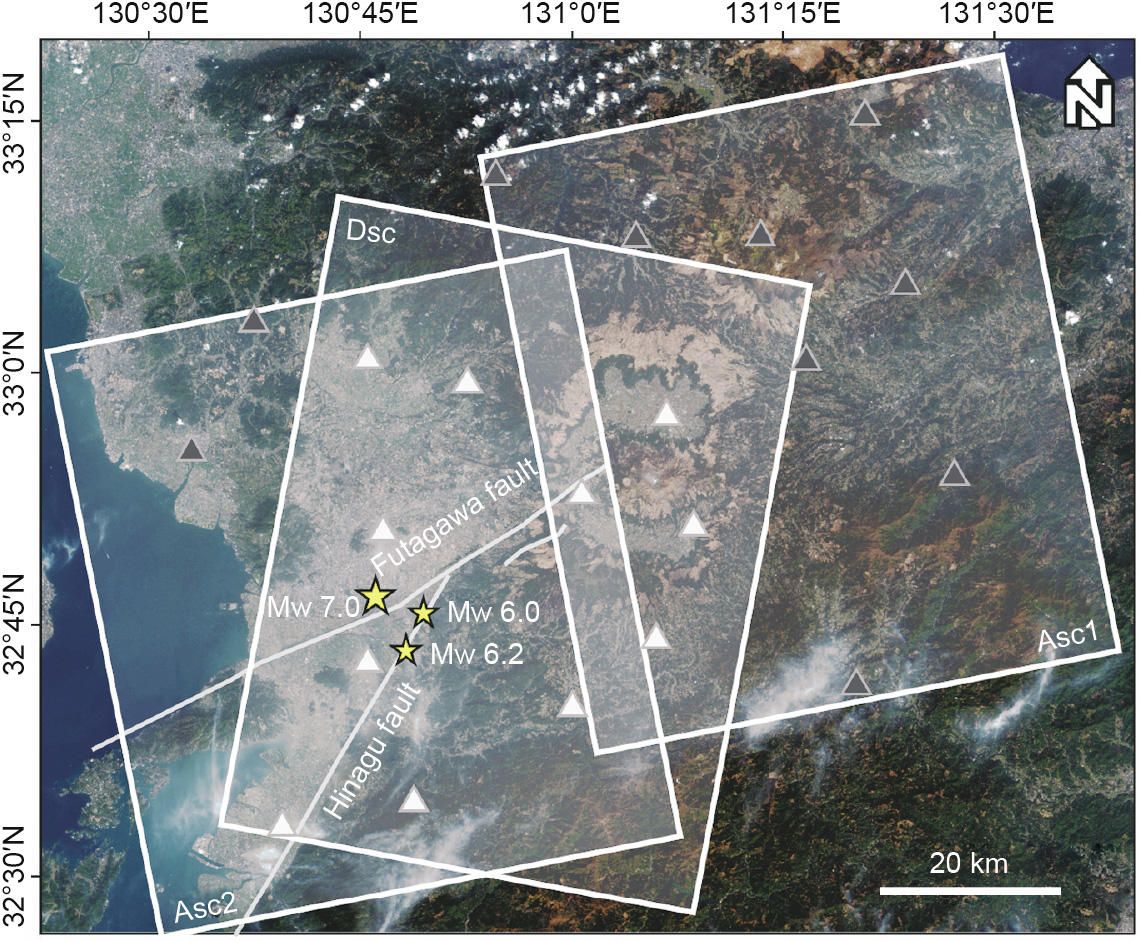 Fig. 1. RGB map (Sentinel-2) of Kumamoto city, Japan, including the boundaries of two ascending and one descending interferometric pairs. The grey lines are ruptures and the yellow stars denote the epicenters of the 2016 Kumamoto earthquake. The white and black triangles indicate the location of the GPS station. Among them, the white triangles were used for validating 3D measurements. The labels "asc1” and "asc2” indicate the interferometric pairs of 20151119_20160616 and 20160211_20160602, respectively, and "dsc” refers to the 20160307_20160418 interferometric pair.

where d is the 3D surface deformation vector and U can be defined as follows:

are the nth and mth unit vectors of the InSAR and MAI measurements, respectively. The unit InSAR vector is defined as follows:

where [ ] T means the transpose of the vector, and

are the radar incidence and satellite track angles from the north, respectively, and the unit MAI vector can be defined as follows:

Finally, the 3D surface deformation can be generated by the least-squares solution as follows, where

is the covariance matrix of the InSAR and MAI measurements [8]:

3D deformation retrieval using InSAR and MAI integration was applied to the 2016 Kumamoto earthquake to test the feasibility of precisely measuring 3D surface deformation via the improved InSAR and MAI integration in a large and complex deformation area. It is well known that the 2016 Kumamoto earthquake was generated along a right-lateral strike-slip fault. It has been reported that the earthquake-related deformation was approximately 2.1 m in the vertical direction and approximately 2.0 m in the horizontal direction [40,44].

The interferometric phase in these areas could not be properly observed because it was not possible to unwrap the phase in the steep and complex deformation. To overcome this limitation, the multi-kernel offset tracking method was used to process the three pairs. A total of 16 offset measurements were obtained using 16 different kernel sizes from 32 × 32 to 256 × 256 pixels. The final offset measurement at each pixel was estimated using 3D median filtering with a kernel size of 3 × 3 × 16 pixels. The final range offset maps were converted from pixels to radians and then smoothed using the non-local (NL) means filter with a (11 × 11)-pixel kernel size to generate the wrapped residual interferogram. Consequently, the wrapped residual interferograms were easily and precisely unwrapped using the traditional minimum cost flow (MCF) algorithm [45].

Fig. 4 shows the unwrapped differential interferograms of the ascending pairs 20151119_20160616 and 20160211_20160602 and the descending pair 20160307_20160418. Notably, one fringe in Fig. 4 is different from that in Fig. 3. The one fringe in Fig. 4 corresponds to 4π. As seen in Fig. 4, the interferometric phase was properly unwrapped in the high fringe rate areas near the fault zone. The properly unwrapped phase was found even in areas that did not have any fringe patterns near the fault line. In these areas, the interferometric phase has no fringe pattern while the range offset has a valid measurement. This is because the deformation is complex and large in these areas, while the decorrelation factor is low. Thus, the measured interferometric phase is valid although it does not create any fringe patterns because of the low decorrelation. The results indicate that the large and complex deformation near the fault zone was well measured using the improved InSAR method. The measurement results were well matched in comparison with GPS-derived LOS deformation. The archived accuracies of the final interferograms were approximately 2.88, 1.96, and 1.90 cm for the asc1, asc2, and dsc pairs [41,44]. Hence, we consider that additional ionospheric correction was not essential.

Fig. 5 shows the MAI interferograms generated from the ascending pairs of 20151119_20160616 and 20160211_20160602 and the descending pair of 20160307_20160418. When the MAI interferograms in Fig. 5 were compared with the InSAR interferograms in Fig. 4, the MAI interferograms had a much lower spatial resolution because they were generated using sub-aperture processing. It is notable that one fringe in Fig. 5 corresponds to 0.2p. As seen in Fig. 5, the MAI phase was properly measured in the high fringe rate areas near the fault zone as well as in the areas that did not have any fringe patterns near the fault line. This is because the forward- and backward-looking residual interferograms have valid measurements because of the low decorrelation. The results indicate that the large and complex deformation near the fault zone was well measured using the improved MAI method. The achieved accuracies of the two ascending AT deformation measurements were approximately 8.13 and 9.87 cm (Figs. 5(a) and (b)), while the accuracy of the descending AT deformation was approximately 3.36 cm (Fig. 5(c)). The larger error in the former two measurements was because the ascending MAI interferograms included severe ionospheric distortion, as seen in Figs. 6(a) and (b). To mitigate the ionospheric distortion shown in Fig. 6(a), we iteratively applied a directional median filter with a rotation angle of 45° and a window kernel of 151 × 63 pixels in the along and cross ionospheric streak directions. In addition, a directional median filter with a rotation angle of 50° and a window kernel of 751 × 63 pixels was iteratively applied to the MAI interferogram shown in Fig. 6(b). More details of the ionospheric mitigation can be found in Refs. [13,46]. The mitigation of the ionospheric distortions via directional median filtering can be seen in Figs. 5(a) and (b). Through this mitigation, we improved the accuracies from approximately 52.29 and 47.55 cm to approximately 8.13 and 9.87 cm in the ascending pairs 20151119_20160616 and 20160211_20160602, respectively. Nevertheless, the accuracy of the ascending AT deformation was much lower than that of the descending AT deformation. Thus, the ascending AT deformation was not used to retrieve the 3D deformation field.

Fig. 7. (a) Coherence map of a descending forward-looking residual interferogram; (b) threshold map of coherence by a criterion of 0.5 on the descending MAI interferogram. Black pixels indicate an area of lower coherence than 0.5; ρ means the coherence value.

Fig. 9 shows the horizontal deformation vector field calculated by combining the eastward and northward deformations. As shown in Fig. 9, the base map of the vector field originates from the upward deformation. The vector field shows that the 2016 Kumamoto earthquake was generated along a right-lateral strikeslip fault. Moreover, approximately 2.49 m of uplift was observed on the west part of the fault while approximately 0.56 m of subsidence was measured on the east part of the fault. This means that the 2016 Kumamoto earthquake was characterized by both rightlateral strike-slip and normal fault motions. 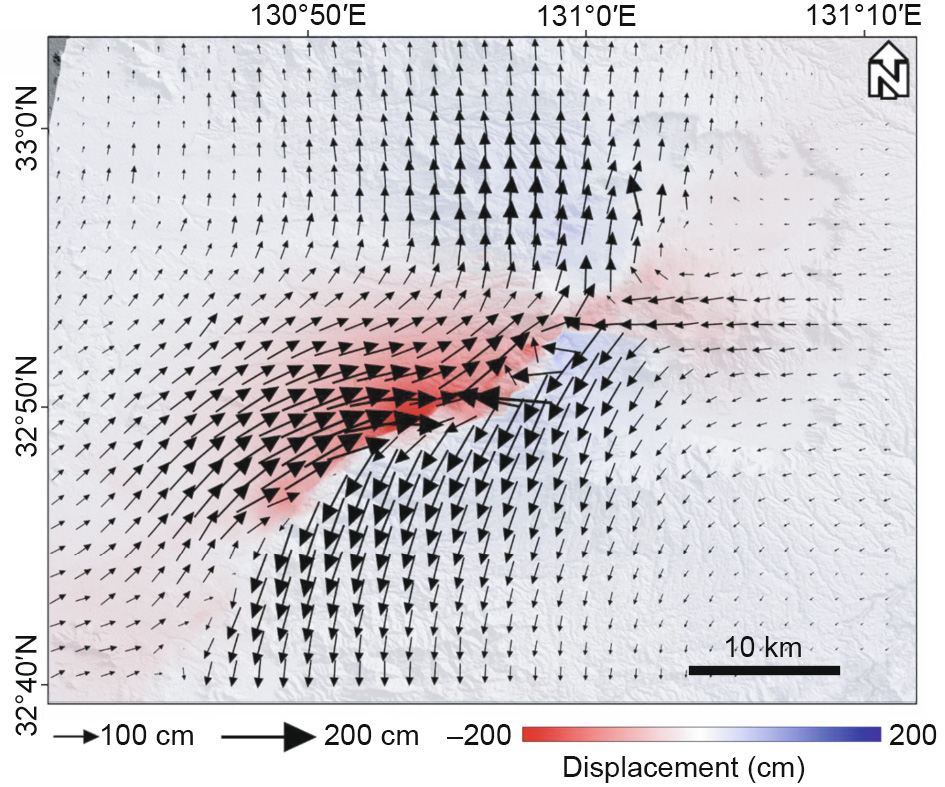 Fig. 10. Comparison of SAR-derived deformation with the in situ GPS deformation in the (a) east (ux), (b) north (uy), and (c) up (uz) directions. RMSE: the root mean square errors.

This study was funded by the Korea Meteorological Administration Research and Development Program (KMI2017-9060) and the National Research Foundation of Korea funded by the Korea government (NRF-2018M1A3A3A02066008). In addition, the ALOS-2 PALSAR-2 data used in this study are owned by the Japan Aerospace Exploration Agency (JAXA) and were provided through the JAXA’s ALOS-2 research program (RA4, PI No. 1412). The GPS data were provided by the Geospatial Information Authority of Japan.

Won-Kyung Baek and Hyung-Sup Jung declare that they have no conflict of interest or financial conflicts to disclose.