Up-to-date digital elevation model (DEM) products are essential in many fields such as hazards mitigation and urban management. Airborne and low-earth-orbit (LEO) space-borne interferometric synthetic aperture radar (InSAR) has been proven to be a valuable tool for DEM generation. However, given the limitations of cost and satellite repeat cycles, it is difficult to generate or update DEMs very frequently (e.g., on a daily basis) for a very large area (e.g., continental scale or greater). Geosynchronous synthetic aperture radar (GEOSAR) satellites fly in geostationary earth orbits, allowing them to observe the same ground area with a very short revisit time (daily or shorter). This offers great potential for the daily DEM generation that is desirable yet thus far impossible with space-borne sensors. In this work, we systematically analyze the quality of daily GEOSAR DEM. The results indicate that the accuracy of a daily GEOSAR DEM is generally much lower than what can be achieved with typical LEO synthetic aperture radar (SAR) sensors; therefore, it is important to develop techniques to mitigate the effects of errors in GEOSAR DEM generation.

Digital elevation models (DEMs) are useful in many practical applications, including civil engineering, hydrology, gravity field modeling, urban planning and management, and emergency response. It is often necessary to rapidly generate and frequently update DEM products to keep them up to date in order to support the various applications. There are many methods for generating DEMs, including traditional geodetic survey approaches (e.g., using total stations and Global Navigation Satellite System (GNSS) equipment), airborne laser imaging, detetion, and ranging (LiDAR), photogrammetry, and interferometric synthetic aperture radar (InSAR). Photogrammetry and InSAR are remote sensing techniques that provide high spatial resolution products at a low cost, in comparison with traditional geodetic approaches. Nowadays, InSAR is often the preferred remote sensing technique for generating large-scale DEMs, given its advantages of weather independence and day and night functionality [1–3].

Despite the advantages of InSAR in DEM generation, it is still very difficult to generate or update DEM products frequently (e.g., on a daily basis) over a very large area (e.g., continental or global) with the existing airborne and/or low-earth-orbit (LEO) space-borne synthetic aperture radar (SAR) sensors. First, it is very costly and time-consuming to generate a high-resolution largescale DEM with airborne or space shuttle SAR sensors. For example, the Shuttle Radar Topography Mission (SRTM) acquired a nearly global high-resolution (~30 m) DEM (covering about 80% of the earth’s land mass) over 11 days (i.e., from 16 to 27 September 1999) with a cost of 220 million USD [2,4]. Due to the limited repeat cycles (generally dozens of days) and small spatial coverage, it is also nearly impossible to achieve daily DEM updates with LEO space-borne SAR interferometry. For example, the German Aerospace Center produced a global DEM using TanDEM-X SAR interferometry [5,6] with data over about four years, from 2010 to 2014.

Geosynchronous SAR (GEOSAR) concepts were originally presented by Tomiyasu and Pacelli [7,8] for observing the earth at a higher frequency. With an altitude of about 36 000 km, GEOSAR sensors can acquire SAR images over a much larger footprint (e.g., 8 × 107 km2 for ScanSAR mode) and with a high spatial resolution (e.g., several meters) in a very short repeat cycle (e.g., 24 h or even as low as dozens of minutes with a constellation of satellites) [9,10]. Typically, GEOSAR can retrieve full threedimensional (3D) displacement components with subcentimeter-level accuracy [10], offering 24 h global hazard monitoring with a constellation consisting of multiple GEOSAR satellites. This topic has been extensively discussed recently [11–14]. In addition, the potential for atmospheric phase screen estimation with GEOSAR data has been discussed [15–17].

A great potential of GEOSAR is its ability to provide a daily DEM update over a large area (e.g., globally). The daily (or shorter) repeat cycle of GEOSAR can provide daily SAR interferometry for global DEM generation (or updating). Furthermore, the short repeat cycle can effectively limit the temporal decorrelation of GEOSAR interferometry [18]. Therefore, a DEM can even be generated for regions covered by dense forest and vegetation. In addition, the GEOSAR system can generally allow much larger critical baselines (e.g., up to several hundreds of kilometers) than LEO SAR systems (generally several kilometers) [19]. This means that most GEOSAR data can be used for DEM generation.

In this work, we will systematically analyze the potential of GEOSAR for daily global DEM generation or updating, with a particular focus on the quality of such DEM products. An overview of InSAR-based DEM generation will be presented first. The main error sources and limitations of GEOSAR InSAR and its influences on GEOSAR-based DEM estimation will then be analyzed.

Height information of the earth’s surface can be estimated from the interferometric phase of InSAR [19]. Fig. 1 depicts the observational geometry of a repeated InSAR system, in which A1 and A2 denote the two locations of the SAR antennas with a spatial baseline of B; α is the baseline inclination angle with respect to the horizontal direction; H and

are the altitude and look angle of the SAR antenna A1; ρ and ρ +

are the ranges between the SAR antennas A1 and A2 with the same ground target; and Z (y ) denotes the surface elevation. It can be found from Fig. 1 that [20] 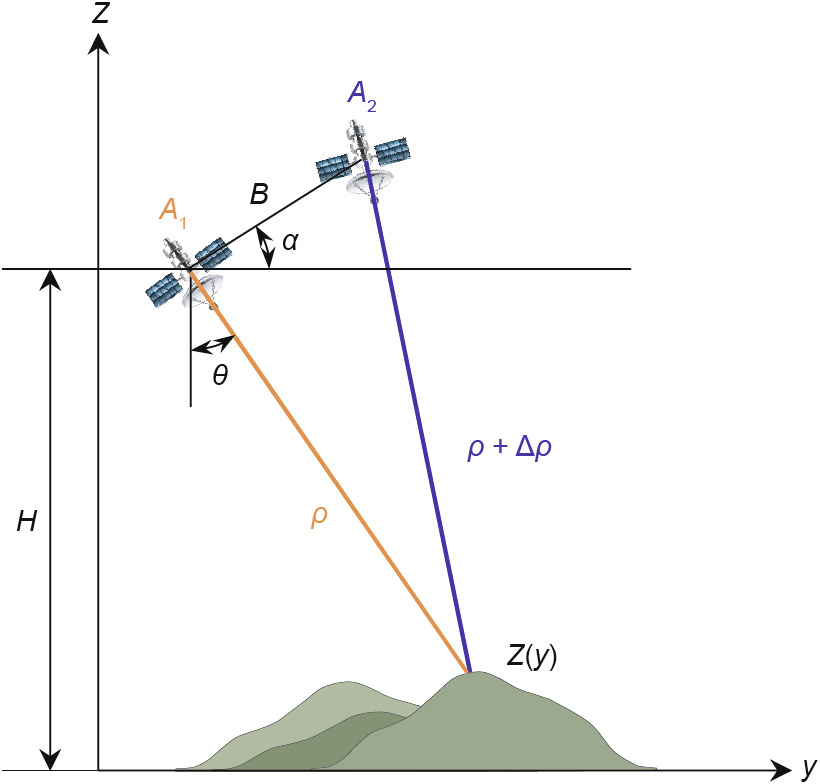 be the unwrapped phase difference between antennas A1 and A2 , that is, the slant-range difference

between the antennas and the same ground target:

By combining Eqs. (1)–(3), the relationship between the interferometric phase u and the surface elevation Z (y ) can be obtained:

As observed in Eq. (4), the elevation Z (y) is related to several parameters, including the satellite altitude H, slant-range ρ , look angle

) can be accurately determined and considered as error-free, while other parameters such as slant-range, spatial baseline, inclination angle, satellite altitude difference, and interferometric phase may contain errors. In this section, we will analyze the effects of these errors on GEOSAR DEM generation based on the system parameters used in Ref. [10] (see Table 1).

Table 1 Parameters of the GEOSAR system adopted in the analysis.

Assuming that the error sources are independent of each other, the effect of the slant-range error

can be expressed according to Eq. (1):

Fig. 2 shows the uncertainties in GEOSAR DEM generation due to slant-range errors as calculated by Eq. (5). Note that a nominal look angle (i.e., 4.8°) was used in this study for simplicity. It can be seen from the results that the slant-range error is linearly propagated into the DEM estimates. Considering that the slant-range error (which is mainly due to tropospheric and ionospheric delays) may be up to dozens of or even hundreds of meters, its influence on DEM estimates is very significant and should be mitigated as much as possible. This issue will be discussed again in detail in Section 4.3. 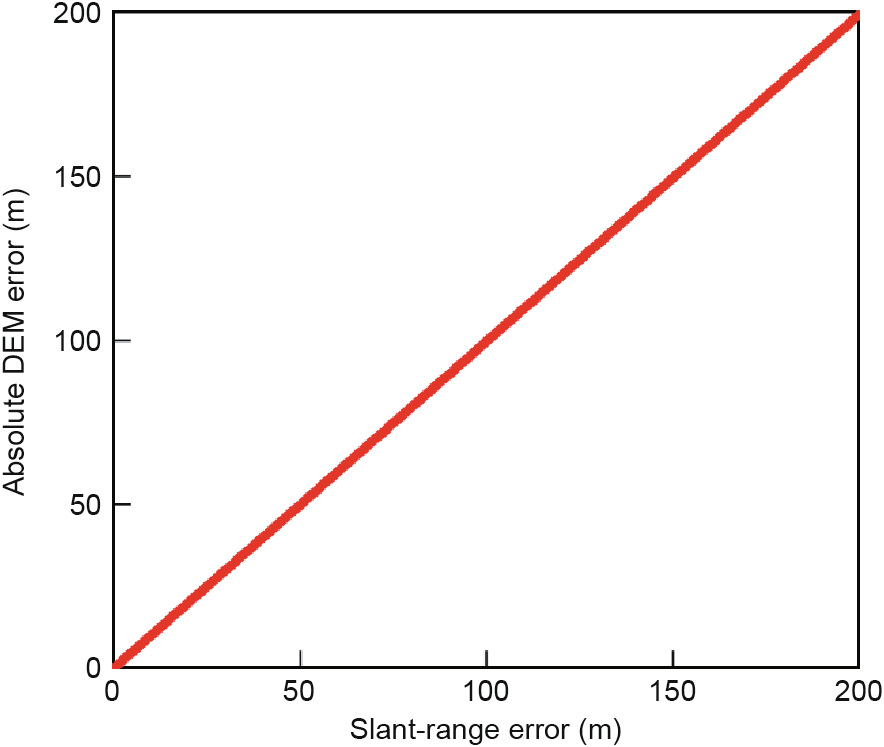 Fig. 2. Absolute DEM errors with respect to slant-range errors with a nominal look angle of 4.8°.

According to Eq. (3), the effect of the spatial baseline error

on GEOSAR DEM generation is

As seen from Eq. (6), propagation of the spatial baseline error primarily depends on the slant range ρ , look angle 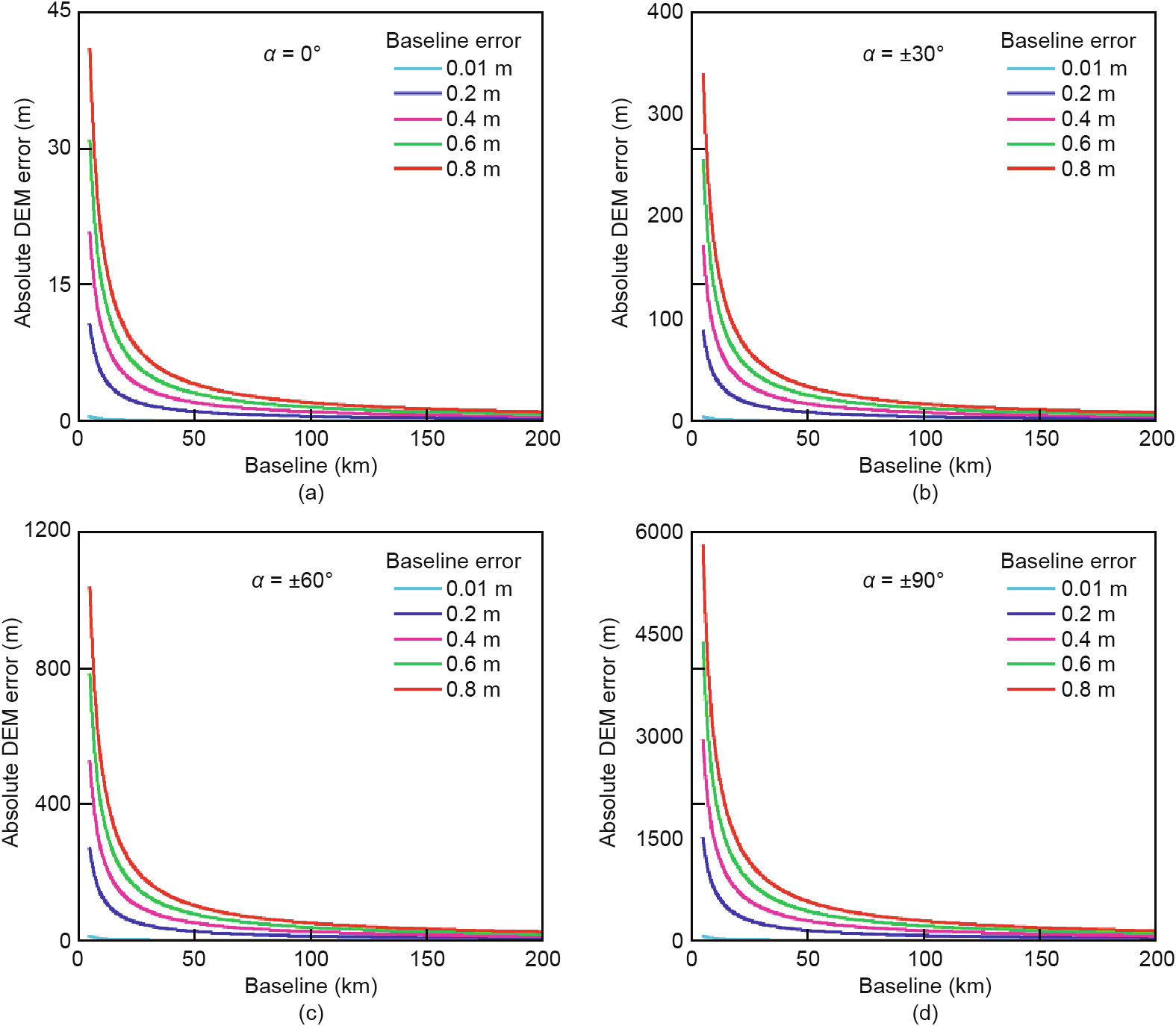 Based on Eqs. (1) and (2), the effect of the baseline inclination angle error

on the GEOSAR DEM estimate 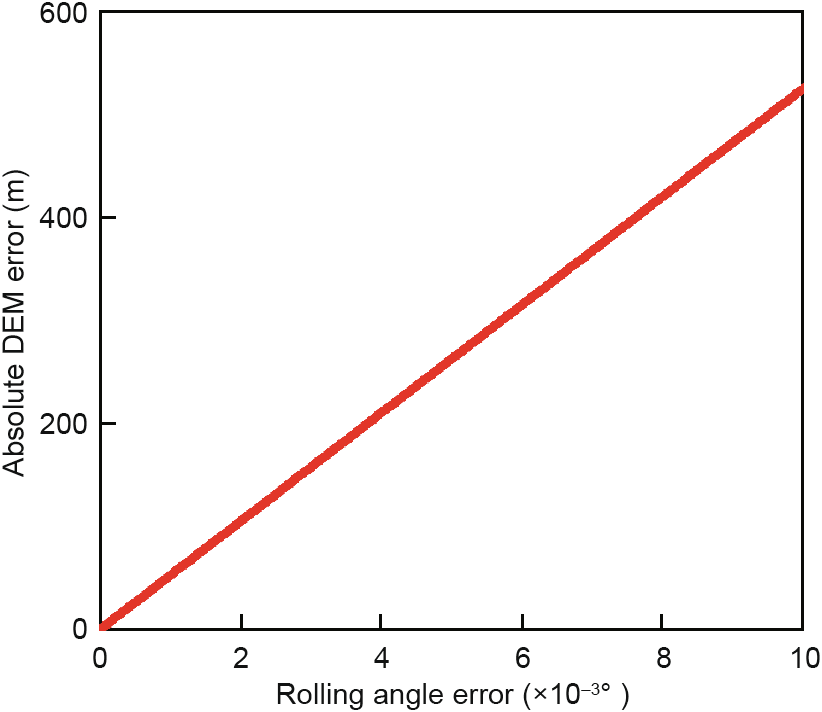 due to the errors in satellite altitude

can be expressed as follows:

Considering that the accuracy level of satellite altitude determination is generally at the centimeter to meter level, the effect of GEOSAR altitude errors is insignificant compared with the other error sources.

According to Eq. (4), the effect of the interferometric phase error

on the DEM error

can be described as follows:

Fig. 5 plots the DEM errors due to interferometric phase errors. Phase errors can significantly affect the accuracy of GEOSAR DEM, especially in the case of small spatial baselines. For example, a phase error of 2π gives results with about 36 m DEM error for a baseline of 5 km, while the DEM error is reduced to about 4 m when the baseline increases to 45 km (see Fig. 5). 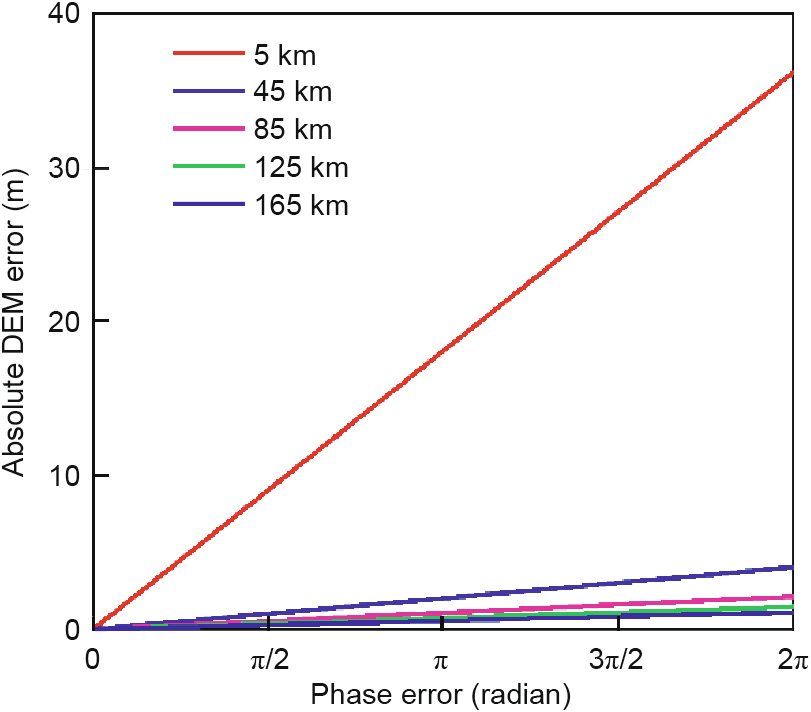 As stated earlier, a GEOSAR system has the potential to generate a daily global DEM, due to the very short satellite revisit time and very large spatial coverage. However, the quality of such a DEM may be limited by intrinsic error sources such as ① those analyzed above, ② dense interferometric phase fringes, and ③ spatial– temporal variation of the atmospheric conditions.

As analyzed in Section 3, five major intrinsic error sources (i.e., slant-range errors, satellite altitude errors, spatial baseline errors, baseline inclination angle errors, and phase errors) can affect the accuracy of GEOSAR DEM generation. These errors affect DEM generation with either GEOSAR or LEO SAR sensors. However, due to the much higher altitude of GEOSAR satellites (about 36 000 km), the impacts of these errors often become much more significant (up to around 50 times greater than those in SAR DEM generation with LEO sensors). As a result, the accuracy of GEOSAR DEM can be much lower than the DEM generated from LEO SAR sensors, if the errors cannot be mitigated properly.

Various methods have been developed for improving the accuracy of InSAR-derived DEM, such as the use of ground control points (corner reflectors) for reducing systematic errors (e.g., baseline and inclination angle errors [21]), multi-baseline InSAR DEM reconstruction for mitigating slant-range errors [3], and maximum a posteriori estimation for noise reduction [22]. These methods can potentially be applied to improve the accuracy of GEOSAR DEM, although further research is still required to test these methods and develop new approaches.

To illustrate this issue, simulated interferometric fringes with respect to different spatial baselines are presented in Fig. 6 based on a real DEM (shown in Fig. 6(a)). The elevation varies from 225 to 2160 m. For a spatial baseline of 10 km, the interferometric phase fringes (wrapped) due to surface terrain (see Fig. 6(c)) are acceptable for phase unwrapping. However, when the spatial baseline increases to 50 or 100 km (see Figs. 6(c) and (d)), the topographic phase fringes are too dense to be unwrapped. 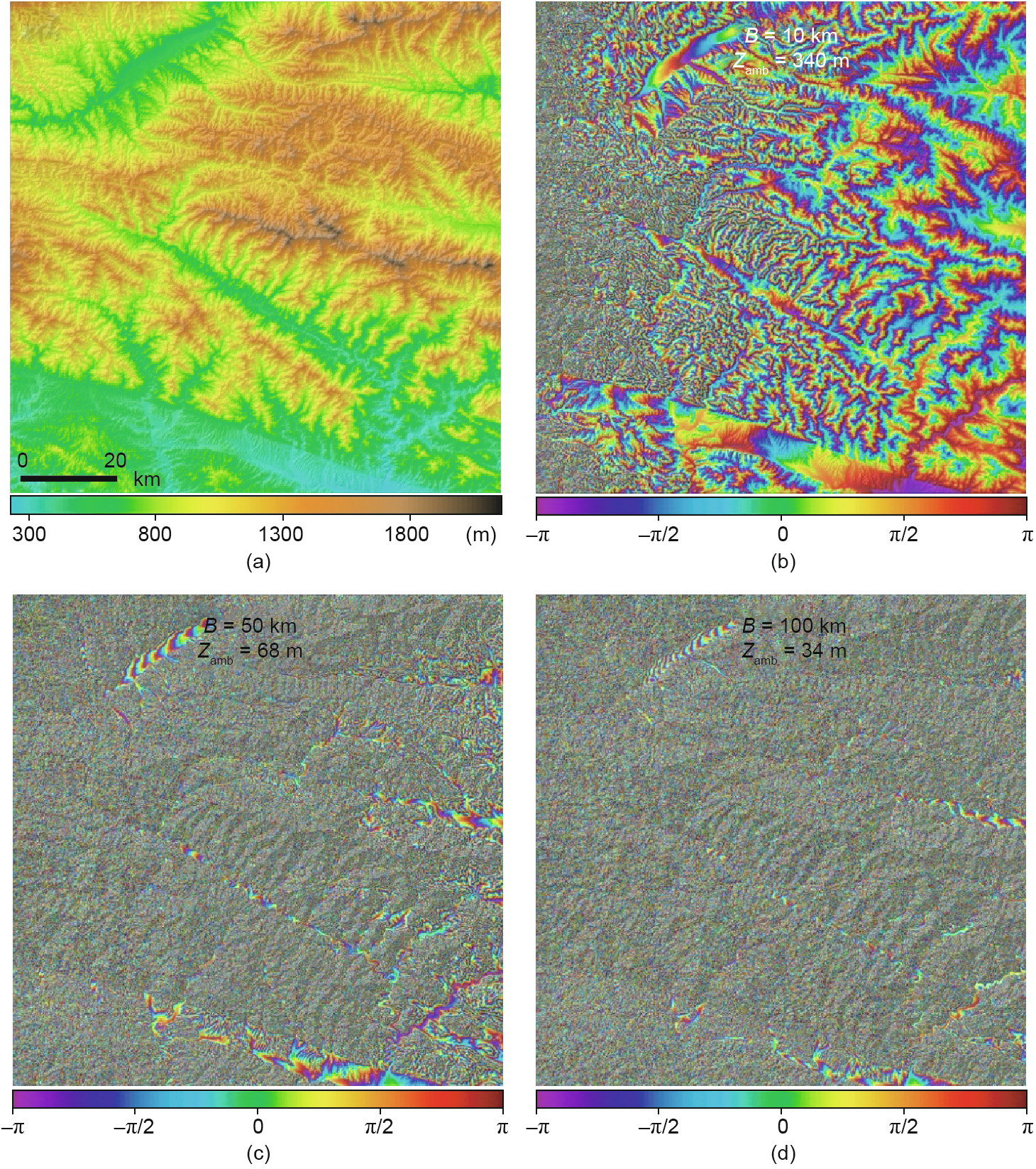 There are approaches to overcome this difficulty. For example, an external DEM (e.g., SRTM DEM) may be applied to simulate and remove the main topographic patterns, and phase unwrapping can then be carried out based on the residual topographic phase [24]. Such strategies may need further investigation when used for GEOSAR DEM generation.

《4.3. Effect of temporal-spatial variation of the atmosphere》

4.3. Effect of temporal-spatial variation of the atmosphere

GEOSAR signals propagate through the full atmosphere (including the troposphere and ionosphere), rather than through only a part of the ionosphere, as is the case for a LEO SAR sensor. Moreover, a GEOSAR has a much longer integration time (from hundreds to thousands of seconds) than a LEO SAR (from several to dozens of seconds) [25]. The atmospheric conditions vary both in time and space, and may cause significant errors in InSAR products [26,27]. Therefore, methods should be developed to better mitigate atmospheric effects (e.g., Refs. [28–30]) to improve the accuracy of GEOSAR daily DEM products.

GEOSAR satellites offer the potential for daily DEM generation due to the very short satellite revisit time and the very large footprint of GEOSAR. We have analyzed the potential quality of such DEMs and found that, due to the very high altitude of GEOSAR satellites, the accuracy level of a GEOSAR DEM may be much lower than that from typical LEO SAR sensors. Therefore, strategies should be developed to better mitigate the error sources of a GEOSAR DEM.

Zefa Yang, Qingjun Zhang, Xiaoli Ding, and Wu Chen declare that they have no conflict of interest or financial conflicts to disclose.