Hydrogen has been hailed as a promising energy carrier for decades. But compared to the thriving success of hybrid and plug-in electric cars, the prospects for cars powered by hydrogen fuel cells have recently diminished, mostly due to challenges in bringing down the costs of fuel cells and developing a broad network of fueling stations.

Beginning in March 2020, three major auto manufacturers— Daimler AG [1], Volkswagen [2], and General Motors (GM) [3]—followed the April 2019 move by Honda [4] to back out of the hydrogen-powered passenger car market. Instead, these companies and others are looking to develop the technology as an emission-free solution to power heavy commercial and military vehicles, with refueling taking place at centralized locations.

In the mid-1800s, scientists invented a fuel cell in which oxygen is fed to the negative electrode (cathode), while hydrogen gas is fed to the positive electrode (anode). A catalyst at the anode separates hydrogen into protons and electrons, with the electrons flowing through an external electrical circuit that can drive electric motors and charge batteries. The protons migrate through the electrolyte to the cathode, where they unite with oxygen and the electrons to produce water vapor and heat. Thus, in operation, a hydrogen fuel cell is greenhouse gas emissions-free.

Whether the hydrogen fuel cell system is totally pollution free depends on how the hydrogen is sourced. Hydrogen is produced by hydrolysis, currently powered almost exclusively by natural gas with its attendant carbon footprint [5]; to eliminate greenhouse gas emissions, hydrolysis must be powered by electricity sourced from renewable energy, of course, which is also an issue with plug-in electric vehicles.

A fuel cell runs at a relatively constant rate and when there is excess electricity production it charges a lithium-ion battery. Then, when extra power is required, to accelerate or drive uphill, the battery supplements the fuel cell. However, this process overall is far less efficient than for plug-in electric cars, where electricity from the grid is directly stored in batteries [2].

Hydrogen fuel cells have been and continue to be used in a wide variety of niche applications—including the Apollo and Gemini space missions, commercial jetliners, forklifts, tractors, and submarines—where an emissions-free power source is desired and the quicker refueling times offered by hydrogen are critical or weight considerations preclude the use of electric batteries, which can be many times heavier than hydrogen fuel systems.

In addition to the mostly unfounded impression imprinted on the general public by the Hindenburg disaster that hydrogenpowered vehicles are dangerous [9], a significant reason hydrogen passenger cars have failed to gain more market share is cost. Fuel cells, which are constructed with rare materials including platinum catalysts, continue to be expensive to produce. Consequently, the most popular hydrogen vehicle model, the Toyota Mirai (Fig. 1), retails for about 58 500 USD, though its true cost may be much higher [10].

"It is difficult because you cannot get the costs down without volume, and you have to make a huge investment to get to that volume,” said Timothy Lipman, an energy and environmental policy instructor at the University of California, Berkeley, and director of the university’s Transportation Sustainability Research Center. "Daimler and the other manufacturers just looked at that and saw it as too high of a hurdle.”

The other major barrier is the lack of hydrogen refueling stations. At the end of 2019, the United States had 64 stations which are mostly in California, Germany had 81, and Japan had 113 [7]. In all three countries a significant portion of the cost for these stations has been provided by public funds, according to Lipman and others [11], and no other country has nearly as many.

The hope among automakers was that the hydrogen-powered car would follow the trajectory of its closest emissions-free competitor, the electric car, where initial adoption was slow but then scientific advances reduced costs enough to pique consumer interest. This allowed for economies of scale to apply, resulting in 7.2 million electric battery cars on the road in 2020 and between 140 million and 245 million projected by 2030 [12].

A key reason for the reduced cost was battery technology, which has advanced significantly in the past few years, making the cost of electric vehicles fall faster than industry experts had projected. Lipman suggests this development is the main factor driving the large automakers to terminate their hydrogen passenger car operations. "The cost of batteries has come down 85% in the last ten years, surprising a lot of people,” he said. "That has made the automakers rethink whether to put their eggs more in the fuel cell basket or the pure plug-in battery basket.”

"It is challenging to see how hydrogen fuel cell technology will catch up to electric vehicles, particularly on an economic basis,” agreed Jake Whitehead, who holds the endowed chair in e-mobility at the University of Queensland’s Dow Centre for Sustainable Engineering Innovation in Brisbane, QLD, Australia. "The reality is they are probably ten years behind where electric vehicles are now.”

Despite electric cars out-competing hydrogen cars, there are still some markets where hydrogen power may make sense, especially in countries with political mandates to slash or eliminate pollution-producing, combustion-powered cars in the near future. And unlike the light vehicle market (e.g., passenger cars), the heavy vehicle market (e.g., commercial trucks, buses, and military transport vehicles), which is expected to amount to 1 million vehicles by 2030 [13], could still be cost-effective for hydrogen. Hydrogen fuel cell vehicles refuel in about half an hour compared to the hours currently needed to recharge most batteries, an important consideration for commercial vehicles that run throughout the day and cannot afford downtime at battery charging stations. "For bus yards, it is a little easier to think about filling a hundred buses a day with hydrogen than charging a hundred buses with electric vehicle chargers,” Lipman said. However, it is important to note that the cost of electricity required to charge electric vehicle batteries (15 USD, using a home-based charger) is significantly lower than the cost of refueling with hydrogen (between 65 and 95 USD) [14]. Currently, there are about 2000 hydrogen buses running in China, with only about 75 in the European Union and less than half of that in the United States and Japan [11].

Besides quick refueling, there are several other potential advantages to hydrogen. The average range for hydrogen vehicles, from 500 to 600 km, is a bit longer than for electric vehicles. And while battery size in electric vehicles scales with vehicle size, the same— importantly—is not true of hydrogen power systems. Large electric vehicles require a huge mass of batteries that is essentially too large and heavy to be practical. In contrast, the additional hydrogen needed to power larger vehicles does not add appreciably more weight and the battery component stays fairly constant in terms of both weight and size even when hydrogen-powered vehicle size increases. "That weight advantage is huge,” Lipman said. There are practical limits on the size of hydrogen tanks, but a truck rated for 600 km would need only about a 1.5 m3 tank. Longer ranges would push that size up linearly.

In addition, most of the heavy vehicles being considered for hydrogen power are not so dependent on a widely distributed network of fueling stations. Rather, in many situations, buses, longhaul freighters, and military vehicles, can all run fairly predetermined routes out of a central hub, meaning whole fleets can be refueled from a single location.

Among the large manufacturers with plans to produce more heavy vehicles powered by hydrogen fuel cells are Toyota [15], GM [3], and Daimler AG [16]. Daimler AG announced a partnership with Volvo to build hydrogen fuel cells for commercial trucks just days before announcing the termination of its hydrogen-powered passenger car development efforts. Hyundai has actually built and shipped out the world’s first hydrogen fuel cell, heavy-duty commercial trucks to Switzerland [17]. The Republic of Korea manufacturer plans to have 60 such vehicles on the road by the end of 2020 and 1600 by the end of 2025. In the United States, the delivery companies United Parcel Service (UPS) [18] and FedEx [19] are running pilot tests of trucks that run on hydrogen. ASKO, Norway’s largest grocery wholesaler, is also conducting trials of hydrogen fuel cell trucks [20]. Finally, the start-up Nikola has claimed orders to produce 14 000 hydrogen-powered semi-trucks but recently fell afoul of the US Securities and Exchange Commission, its chairman exiting the company in September 2020 [21,22].

And while established manufacturers are shedding their hydrogen car divisions, at least one hydrogen power startup is attempting to enter the market, with the company Hyperion building a very high-end passenger car (Fig. 2) [23]. 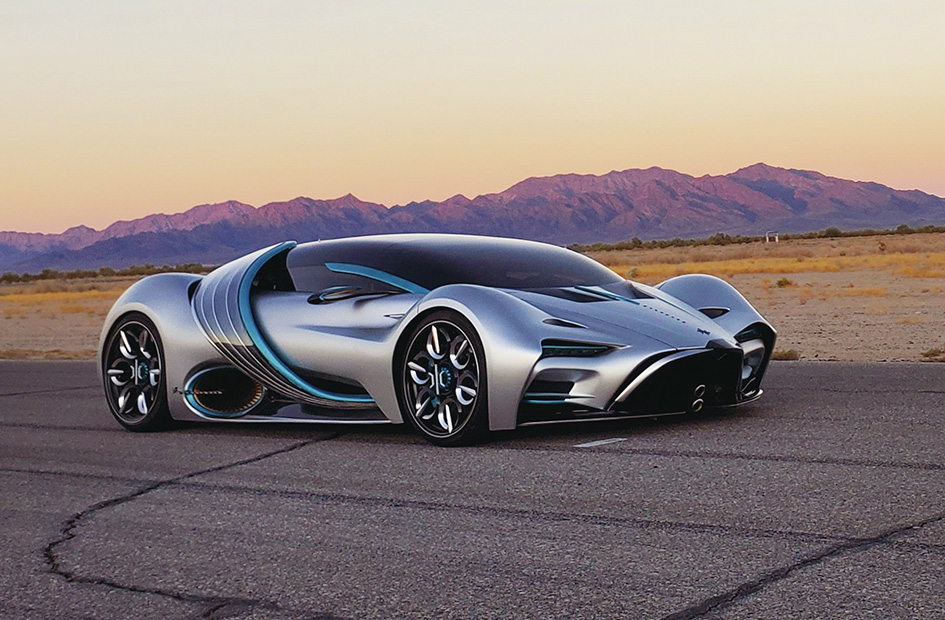 Fig. 2. The XP-1 hydrogen fuel-cell car under development by startup Hyperion boasts a 1600 km range, more than twice the average range of other hydrogen cars. The XP-1 will go into production in the United States in 2022 and will be limited to 300 units. Credit: Hyperion (public domain).

But even with such new players and a switch to heavier vehicles, the potential overall impact of the technology remains in question. "If the main driving motivation of hydrogen vehicles is to reduce emissions to restrain global warming, we have to recognize that hydrogen fuel cells are unlikely to play a major role in land transport before 2050,” Whitehead said. "Our efforts are better focused on more energy efficient, cost-effective, and mature technologies now, and looking to how hydrogen, or hydrogenbased fuels, can be used to support the more difficult to decarbonize sectors of marine shipping and aviation.”