An unprecedented trio of new spacecraft is now on its way to Mars to probe promising locations for ancient life and monitor the planet’s weather [1]. The three missions launched by the United States, China, and the United Arab Emirates (UAE) blasted off during a ten-day period in July 2020, and each represents an exploration first. If the Chinese and UAE missions are successful, they will mark the first Mars visits for those countries, as well as China’s first landing on the planet’s surface [2]. The US National Aeronautics and Space Administration (NASA) mission, meanwhile, will set the stage for delivering the first samples of Martian rocks to Earth so they can be analyzed for traces of life [3].

"It is exciting to have multiple missions going to multiple locations,” said Kirsten Siebach, an assistant professor of Earth, environmental, and planetary sciences at Rice University in Houston, TX, USA. "These missions should almost certainly tell us useful new things about Mars,” said Paul Byrne, an associate professor of planetary geology at North Carolina State University in Raleigh, NC, USA.

The timing of the launches reflects the orbital alignment of Mars and Earth. Only about every 26 months are the two planets close enough to make a trip between them feasible [4]. A fourth mission, sponsored jointly by the European Space Agency (ESA) and Russia’s space agency Roscosmos, was also scheduled for this launch window but was postponed until 2022 because of the coronavirus disease 2019 (COVID-19) pandemic [5].

The multiple departures to Mars also reflect the "incremental, integral advance of knowledge” from previous missions that has created scientific momentum for further exploration of the planet, said professor of Earth and space exploration Jim Bell of Arizona State University in Tempe, AZ, USA. Current president of The Planetary Society, the world’s largest public space education and advocacy organization, Bell also heads one of the science teams for the US spacecraft. "Waiting there are clues to the origin and early evolution of the terrestrial planets,” he said.

The vehicles that have flown by, orbited, landed on, and rolled over Mars, starting with NASA’s Mariner 4 in 1965, have greatly increased scientists’ understanding of the planet. Mars may be arid, frigid, and desolate today, but most researchers think that billions of years ago it boasted a balmy climate and plenty of liquid water that formed rivers, lakes, and possibly an ocean [6]. "Mars may have had the right stuff for life in the past,” said Raymond Arvidson, a professor of Earth and planetary sciences at Washington University in St. Louis, MO, USA. "The question is, how far did it go?”

Before the new craft can begin exploring Mars, they have to get there and deploy their instruments, which in itself would be an achievement, since about half of past missions have failed [7]. But if all three arrive at the red planet as scheduled and start working, they will perform a variety of scientific assignments.

The US mission will deposit NASA’s Perseverance rover in the Jezero Crater, a dry lakebed about 48 km across in the planet’s northern hemisphere [8]. The crater is a prime location to search for evidence of past life because it formerly contained a lake and features a delta, the formation created when a river fans out as it enters a body of water [8]. On Earth, deltas are rich in organic material and other remnants of life, Arvidson said.

Almost identical to NASA’s Curiosity rover that has been traveling over the surface of Mars since 2012, the six-wheeled, plutonium-powered Perseverance rover carries more advanced instruments—seven in total—that it will use to investigate the crater [9,10]. Bell and his team developed a camera system that captures three-dimensional images and high-definition video [11], enabling scientists and engineers on Earth to chart the 3 m-long and 2.7 m-wide rover’s course through the crater and pick the most promising rocks or geological features for scrutiny. In addition, the rover’s robotic arm carries instruments that can perform Raman and fluorescence spectroscopy to identify minerals and organic molecules, as well as an X-ray fluorescence spectrometer for analyzing the chemical composition of rock [12,13].

Even with its sophisticated instruments, the Perseverance rover almost certainly will not find indisputable evidence of life on Mars, the scientists agree. If that evidence does exist, said Bell, ‘‘it is not likely to be a fossil,” but will probably be a subtle geologic, chemical, or isotopic signature. Detecting that signature and demonstrating beyond doubt that it indicates the presence of past life will require the capabilities of laboratories on Earth, he said. The Perseverance rover’s most important role is to help make these in-depth analyses possible by drilling cores from promising rocks and caching them for a future expedition to collect (Fig. 1) [14]. When that might happen remains to be determined, but NASA and the ESA are planning a joint mission that could potentially return the samples to Earth as soon as 2031 [14]. 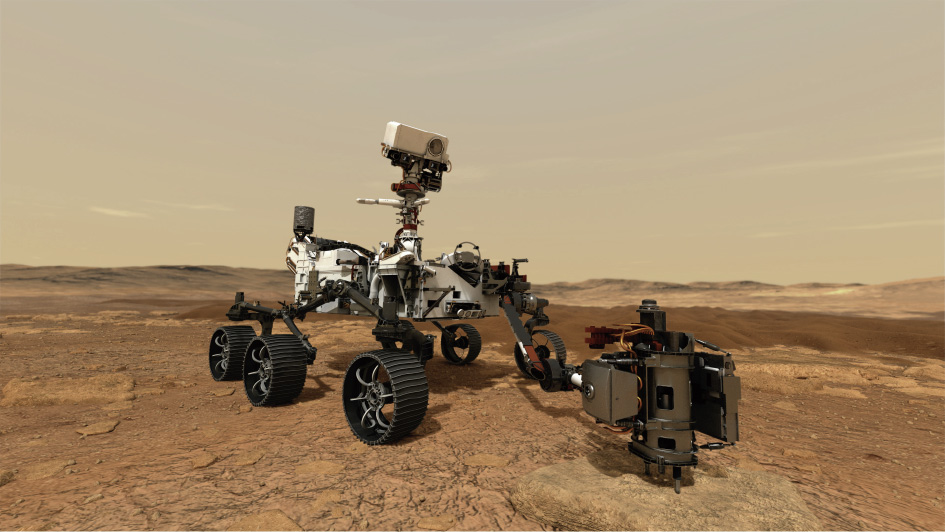 Fig. 1. An artist’s rendering shows NASA’s Perseverance rover drilling rock cores, which may contain evidence of past life, in Mars’ Jezero Crater. The rover will collect and store about 30 rock and soil samples for a future mission to pick up and return to Earth. Credit: NASA/JPL-Caltech (public domain).

The Perseverance rover will also test technologies that could benefit future missions. For example, it carries a miniature helicopter named Ingenuity that weighs only 1.8 kg (Fig. 2) [15]. No vehicle has ever flown on another planet. If Ingenuity can lift off in Mars’ thin atmosphere, larger models could be useful for scouting or transportation on Mars or for exploring other celestial bodies in the Solar System. NASA is already planning to send a helicopter to Saturn’s moon Titan [16]. "Getting anything flying on another planet would be very valuable,” said Arvidson. 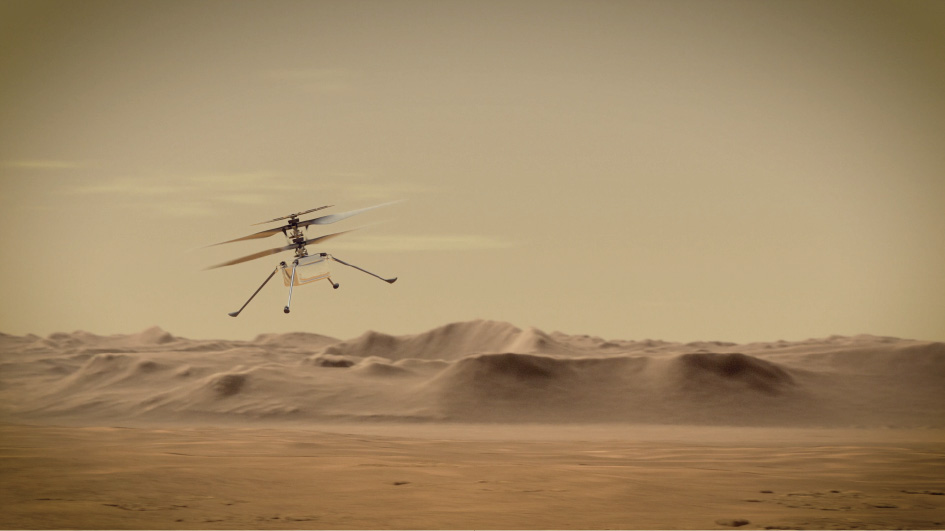 Fig. 2. The Perseverance rover can launch a miniature helicopter about 0.5 m tall and weighing 1.8 kg. If the "Ingenuity” helicopter succeeds in flying, as depicted in this artist’s rendering, it will be the first craft to do so on another planet. To generate lift in Mars’ thin atmosphere, Ingenuity’s blades will spin at 2400 revolutions per minute, around five times faster than the average helicopter on Earth. NASA expects it to make five short test flights lasting about 90 s each. Credit: NASA/JPL-Caltech (public domain).

Two other NASA craft are currently operating on Mars—Curiosity and the InSight lander, which touched down at Elysium Planitia near the planet’s equator in November of 2018 [17,18]. To help scientists better understand the structure of Mars’ interior, InSight is monitoring seismic activity and has measured hundreds of quakes, the first ones detected on another planet [19]. However, the lander’s temperature probe, designed to take readings from as much as 5 m beneath the surface, has been beset by numerous setbacks [18].

China’s Tianwen-1 mission notably includes an orbiter, a lander, and a rover. China tried to send an orbiter to the red planet in 2011, but the Russian rocket carrying it malfunctioned [20]. Other countries started out with orbiters, moved on to landers, and only then deployed rovers [20]. China is the first country to try to complete all three exploration milestones in the same mission. If it succeeds, "It would be spectacular,” said Bell.

The seven instruments aboard Tianwen-1 include a spectrometer for analyzing the planet’s mineralogy and a magnetometer for probing its magnetic field [21,22]. The lander and rover probably will touch down on a plain in the planet’s northern hemisphere, Utopia Planitia, "that likely has evidence for habitability or maybe ancient life,” Arvidson said. The rover will explore the area with instruments that include a detector for assaying the chemical composition of the surface and ground-penetrating radar, which the Perseverance rover also carries [22,23].

The third spacecraft, the UAE’s orbiter "Hope” will serve as the first weather satellite for the planet. The data it captures could help researchers investigating the evolution of the planet, Siebach said. "We have had a hard time understanding past weather on Mars,” she said. By continuously tracking current atmospheric conditions, the Hope orbiter may provide insight into the planet’s weather history. The craft carries an infrared spectrometer to measure dust, water vapor, and ice in the lower atmosphere [10]. In addition, its ultraviolet spectrometer should allow the orbiter to track oxygen, carbon monoxide, and hydrogen in the upper layers of the atmosphere, which could offer clues about how most of Mars’ atmosphere leaked away into space [1].

The new investigations are scheduled to begin when the three missions reach Mars in February 2021. "Will they revolutionize our view of the planet? I am not sure,” said Byrne. "But I cannot wait to see what they find.”