Food security has always been a major strategic issue related to national economic development, social stability, and national independence. Clarifying the degree of food security and scientifically estimating the future national food demand are the basic work for formulating food security policies. In 2015, the supply and demand of rice and wheat were basically balanced, corn supply exceeded demand, and soybean was heavily dependent on imports; cotton, oil, and sugar had great dependence on foreign products, of which the self-sufficiency rate of edible vegetable oil was only 36.9%, cotton 87.7%, and sugar 74.4%; supply and demand of livestock products were basically balanced, and milk needs variety regulation.

As the saying goes, “Food is the paramount necessity of the people.” Ensuring food security and a stable supply of agricultural products are always important goals for any government. China has a large population, so it has a great demand for agricultural products, which is difficult to meet through global trade [1]. This means that China should depend only on domestic supply rather than imports to achieve food sovereignty, unlike Japan and Korea [2]. The Central Rural Work Conference was held at the end of 2013, and proposed a national food security strategy for the new period summarized by “Be self-centered, rely mainly on domestic production, ensure production capacity, import moderately, and support by technical means,” which highlighted that “Chinese people should ensure their food supply themselves.” In this case, we must ask to what extent domestic agricultural production provides food security. With the sustained economic development and dramatic changes in urban and rural structure, how will the demand for food and other agricultural products change in the coming decade? This study uses statistical data to comprehensively analyze the current supply and demand for agricultural products, such as grain, cotton, oil, meat, eggs, milk, aquatic products, and so on. It also estimates China’s major agricultural product consumption for 2025 and 2030 and puts forward directions and proposals for ensuring the basic balance between supply and demand.

Rice supply exceeded demand. China’s rice production has increased year by year, encouraged by national food support policies, especially the Lowest Rice Purchase Pricing Policy implemented in 2004. China’s total rice production in 2015 was 2.082×108 t. As the population has continued to grow, human consumption of rice has maintained a fixed growth rate. The total rice consumption in 2015 was 1.895×108 t, of which human consumption was 1.69×108 t, while consumption for animal feed and industrial use was 1.92×107 t, respectively accounting for 89.2% and 10.1% of the total. The rice self-sufficiency rate was 109.9% in 2015.

Table 1. The Supply and demand of China’s major agricultural products in 2015. 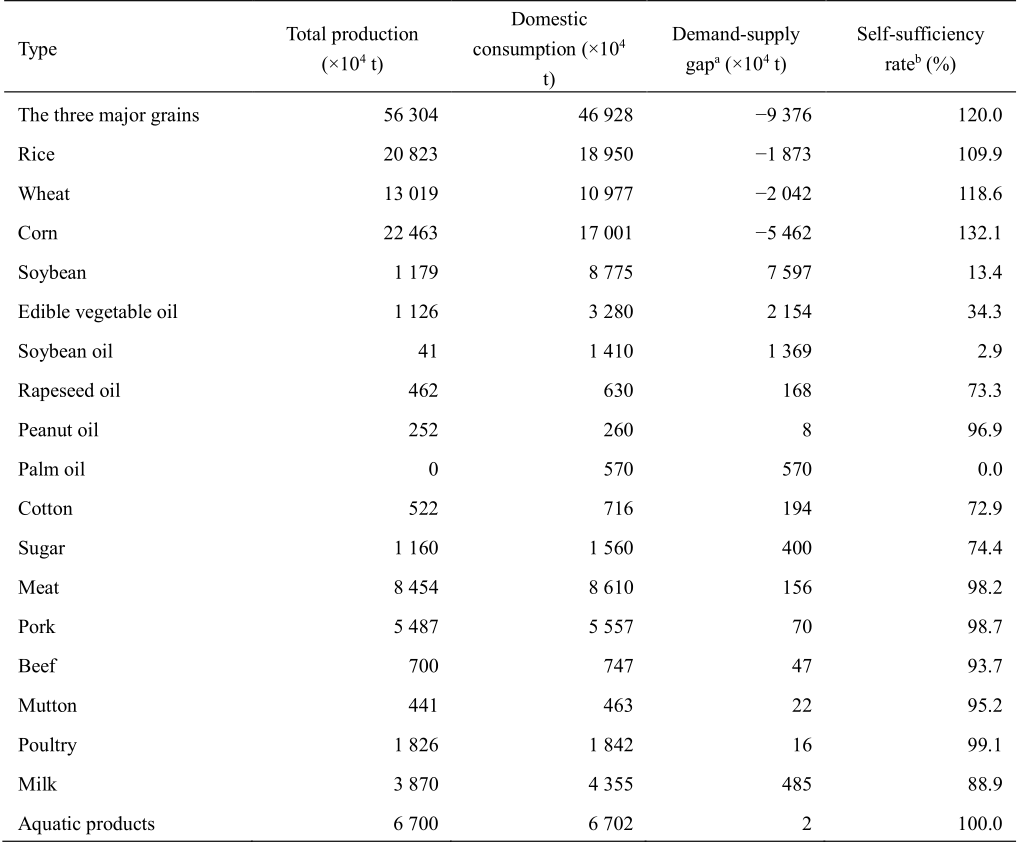 2.1.2 Soybean was heavily dependent on imports

2.1.3 The import quantity of alternatives for feed corn increased rapidly.

In recent years, the import quantities of alternatives for feed corn, such as barley, sorghum, DDGS (distillers dried grains with soluble), and dry cassava, have increased rapidly. This has affected the marketing and fiscal stock of domestic corn, leading to overstocking. In 2015, China’s excess production of corn reached 5.462×107 t, while, the net quantity of imported barley, sorghum, DDGS, and cassava reached 3.761×107 t in the same period (Fig. 1). 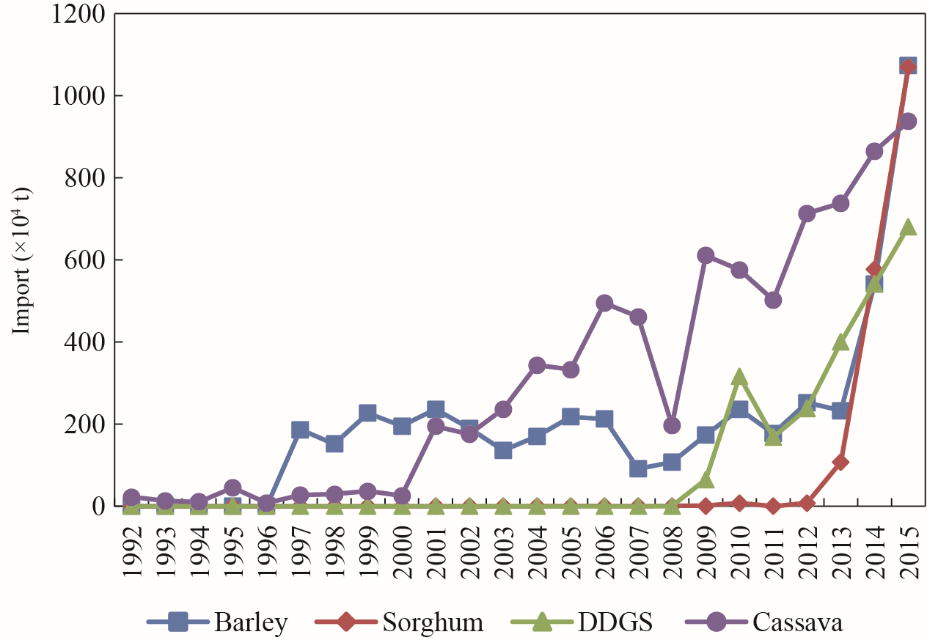 China is the largest oilseed producer in the world. The gross production of the eight major oilseeds (namely cotton seed, soybean, rapeseed, peanuts, sunflower seed, sesame seed, flaxseed, and amellia oleifera seed) maintained to be approximately 6×107 t [3]. In 2015, the total production of China’s eight major oilseeds was 5.944×107 t. Among them, the production of cotton seed, soybean, rapeseed, and peanuts accounted for approximately 90% of the total oilseed production. The oil and fat produced by these four crops, together with palm oil, make up the major portion of the Chinese people’s edible oil consumption.

2.2.2 Supply of edible vegetable oil was heavily dependent on imports 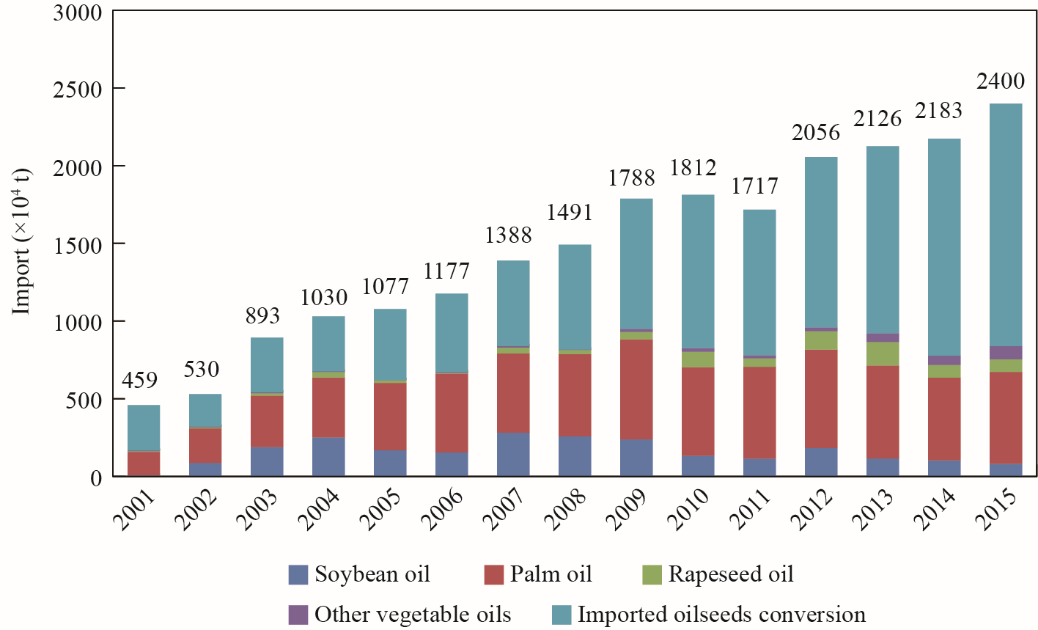 2.2.3 The supply-demand gap of cotton increased

2.2.4 The total production and consumption of edible sugar have increased

2.3.1 The import quantity of meat increased, but the consumption proportion was small

2.3.2 The consumption and production of dairy products has increased continuously

2.3.3 The consumption of aquatic products has increased steadily

《3 Prediction of domestic major agricultural production in 2025 and 2030》

3 Prediction of domestic major agricultural production in 2025 and 2030

Domestic and foreign research has achieved fruitful results with regard to the prediction of the future demand for agricultural products (Table 2). The forecasting methods can be divided into calculation of personal nutrient intake [5−9], estimation of trend and experience [10−15], and predictions based on structural models [16−19]. Considering the influence of the promotion of consumption structure, urbanization rate, and other factors, we should take the most commonly used and feasible timing model to predict domestic future demand for major agricultural products.

The data of consumption per capita of these agricultural products are from the China Statistical Yearbook, Chinese Rural Household Survey Yearbook, and Chinese Residents Survey Yearbook over the years. The proportion of eating out is based on data from the China Health and Nutrition Survey. The conversion ratio of raw grain and finished grain is obtained by combining the average yields of rice, wheat, maize, millet, sorghum, pulses, and potatoes, which are referred to in the Agricultural Technology Economy Manual, with the ratio of their yields in the past years. Consumption per capita of edible vegetable oils, sugar, and cotton are calculated by their total consumption over the years. Data of total consumption are from the China Food Development Report, China Sugar Wine Yearbook, and China Cotton Yearbook over the years. The population projections colligates the relevant research findings of the China Population and Development Research Centre and the Population Division of the United Nations Department of Economic and Social Affairs. It is believed that China’s urbanization rate will have reached 65% by 2025 and 70% by 2030, and the population will be between 1.42 and 1.45 billion [24]. The coefficients of the feed conversion rate are related to the feed efficiency, conversion of a living animal and its carcass, and conversion of processed and raw grain [25,26]. 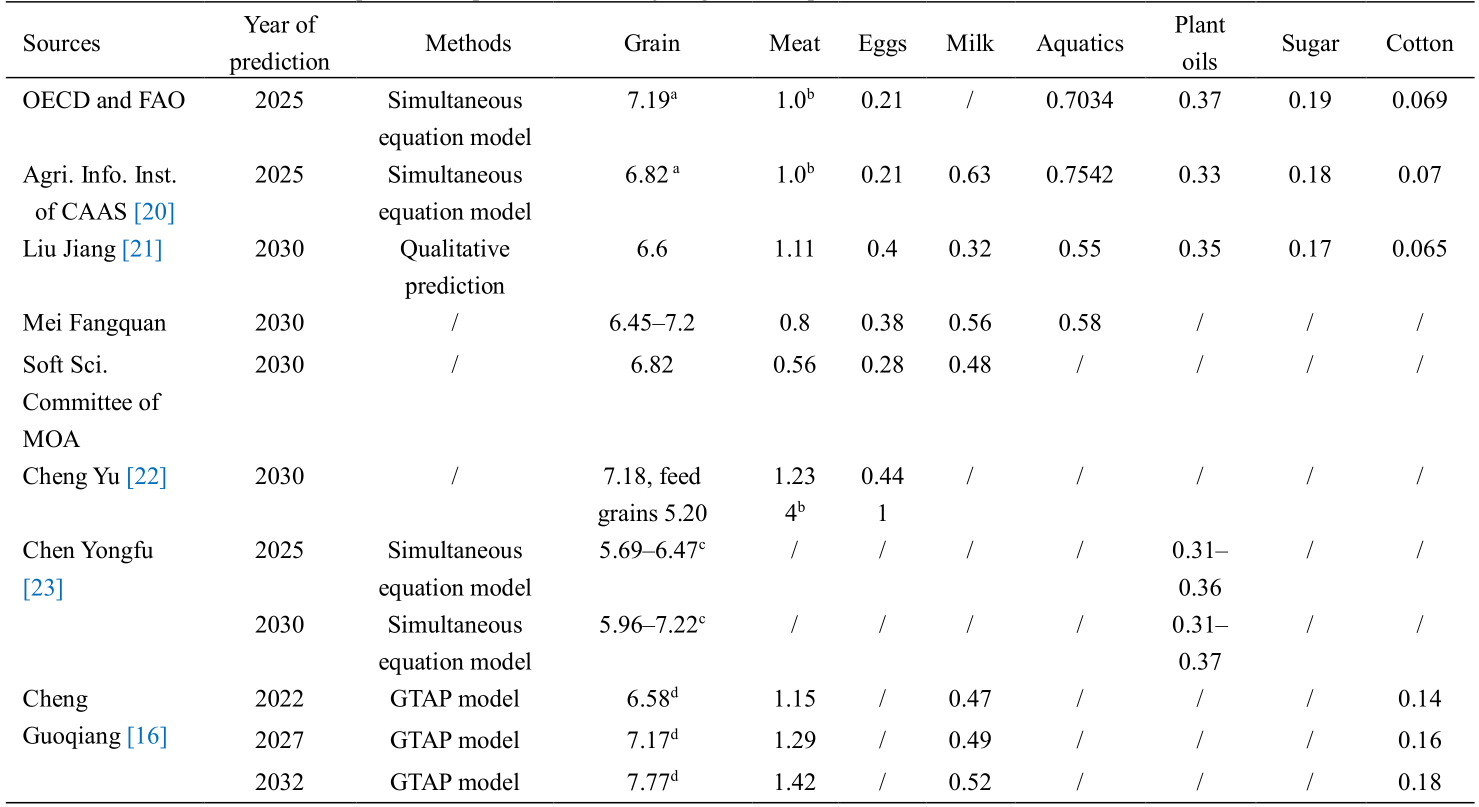 a Grain for industrial, seed, and other uses accounts for 15% of the total grain consumption.

It is estimated that at present, we have the potential to economize by 5.49×107t on grain for livestock farming, food, alcohol consumption, food processing, warehousing, and so on, which accounts for about 10% of the total grain production [27]. According to the requirements for a reasonable diet, the food demand in 2030 should be 5.86×108 t at most [7]. However, in 2015, the total grain production has reached 6.21×108 t, which indicates that there is enough space to optimize and economize within the dietary structure.

As to the concrete measures, first, we should strengthen political guidance. We ought to draw up concrete food-saving plans, mobilizing enthusiasm for scientifically planning links between livestock and poultry breeding, food processing and warehousing, and food consumption, from the aspects of policy, capital, projects, science and technology, and talent. Second, we should improve publicity on economization in consumption through multi-media and community. We can also motivate consumers to drink and waste less through diverse education and supervision. Step by step, their consciousness of economization on food will be enhanced.

《4.3 Fully utilize both domestic and international markets and resources》

4.3 Fully utilize both domestic and international markets and resources