On 19 April 2021, its twin rotors stirring the wispy Martian atmosphere, Ingenuity, the National Aeronautics and Space Administration (NASA) miniature helicopter, lifted off the surface of the Red Planet [1]. Built by NASA’s Jet Propulsion Laboratory in California, the 0.5 m tall craft did not perform any fancy aerobatics. It climbed to an altitude of 3 m, hovered, turned 96°, and then landed. But the 39 s flight was remarkable because it was the first by an aircraft on a planet other than Earth [1].

NASA’s goal for Ingenuity was to demonstrate that such flights are possible, and it succeeded. That achievement alone ‘‘is huge,” said Jesse Rogerson, an assistant professor of physics and astronomy at York University in Toronto, ON, Canada. However, the miniature helicopter recorded other accomplishments, traveling farther, flying faster, and completing more trips than its engineers anticipated [2]. NASA also showed that Ingenuity could work in tandem with its Perseverance rover, which was not part of the original mission (Figs. 1 and 2) [3]. Ingenuity’s performance suggests that similar craft could play important roles in the exploration of Mars, complementing rovers, orbiters, and, eventually, astronauts, said Rogerson. 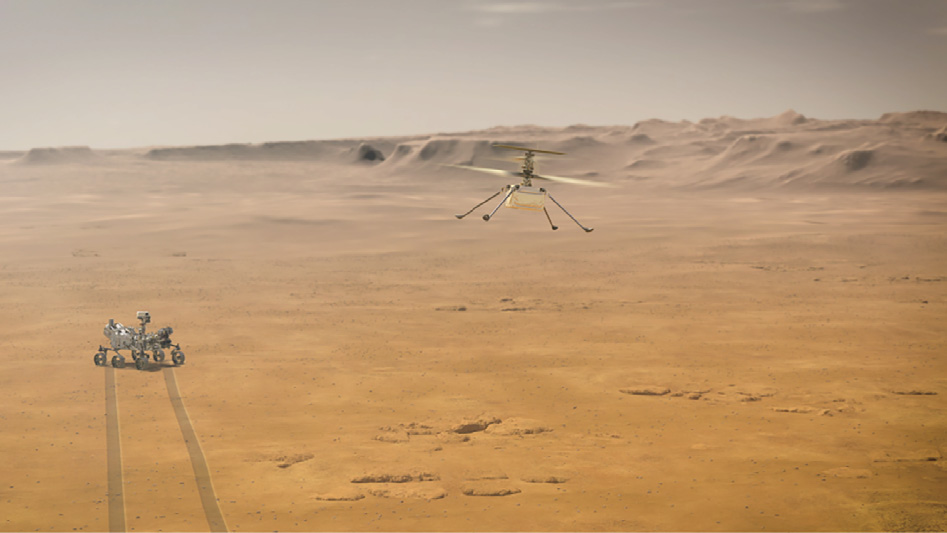 Fig. 1. An artist’s impression shows the mini-helicopter Ingenuity flying above NASA’s Perseverance rover, which is now collecting samples on the surface of Mars. The helicopter traveled a total of more than 2 km in its first 11 missions and reached a maximum altitude of 12 m. Credit: NASA/JPL-Caltech. 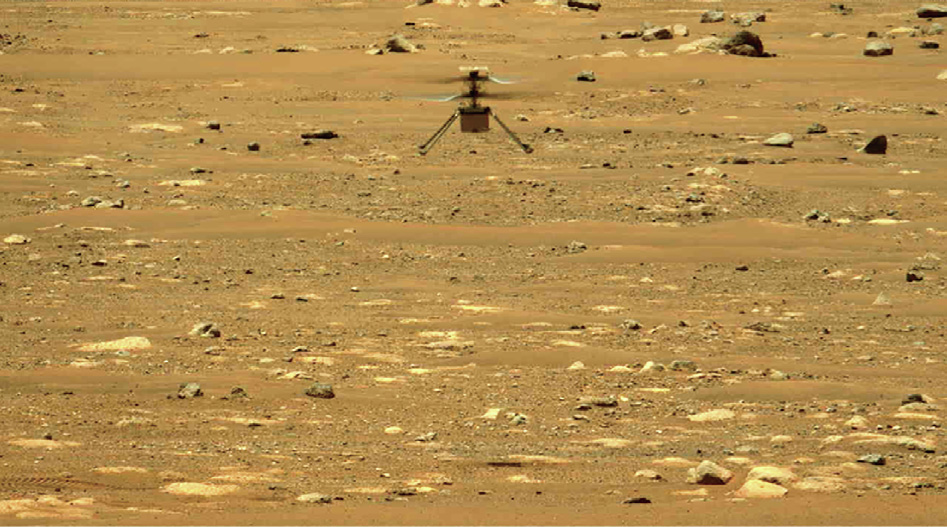 Fig. 2. The Perseverance rover snapped this photo of Ingenuity lifting off on its second flight on 22 April 2021. The copter showed more of its capabilities than on its initial flight three days earlier, traveling a total of 4 m, making three turns, and staying aloft for nearly 52 s. Credit: NASA/JPL-Caltech/ASU/MSSS.

Getting a helicopter airborne on Mars required clever engineering [4]. Although the planet’s gravitational pull is only about 40% as strong as Earth’s, its atmosphere is less than 1% as dense, which makes generating lift difficult [5]. Flying near the surface on Mars is equivalent to flying at 30 500 m on Earth, nearly 20 000 m higher than the record altitude for a helicopter [6].

Reducing weight was an imperative for Ingenuity’s designers, led by chief engineer J. ‘‘Bob” Balaram. They pared the craft down to only 1.8 kg [4]. It carries no scientific instruments for probing the Martian surface [5] and lands on lightweight legs of carbon fiber and epoxy [7]. Its dual rotors, which consist of foam cores covered by carbon fiber [7], weigh less than 70 g each [8]. They are also stiff, an attribute that helps reduce vibrations that can occur in the thin Martian atmosphere [9]. To produce the lift necessary to leave the surface, the rotors are relatively large—1.2 m from tip to tip—and their lightweight construction allows them to spin at more than 2400 revolutions per minute (rpm), about five times faster than a helicopter’s rotors on Earth [10,11].

Turning Ingenuity’s rotors are eight electric motors powered by six lithium-ion batteries [4,7]. A solar panel atop the craft recharges the batteries [5], which also power a heater that helps Ingenuity stay warm during Martian nights that can fall to –90 °C [5,12]. Because signals from Earth take about 10 min to reach Mars, NASA’s ground controllers cannot pilot Ingenuity like they would a drone [13]. Instead, they send the craft a flight plan [13]. Ingenuity then follows this route autonomously, controlling its position and movements with help from a laser altimeter, an inclinometer, an inertial measurement unit that gauges acceleration and rotation, and a downward-pointing black-and-white camera [13].

Ingenuity arrived on Mars in February slung beneath the Perseverance rover that is now exploring the planet’s Jezero crater [14,15]. After the copter separated from the rover and powered up, NASA expected to operate it for about a month. According to its specifications, Ingenuity should be able to travel up to 300 m in any one flight, stay airborne for 90 s, and climb to 5 m [16]. But during its first five flights, Ingenuity managed to reach 10 m and remain aloft for 117 s at a time [10].

So instead of shutting the helicopter down after a month, NASA pushed its limits [17]. Ingenuity recovered from what NASA termed an ‘‘anomaly” during its sixth flight. The craft unexpectedly tilted and rolled more than 20° because of a glitch in the image analysis system that helps it navigate [10,18]. And the copter has continued to set speed, distance, and flight time records [10].

Ingenuity also showed it could assist Perseverance. For its ninth mission on 5 July 2021, Ingenuity flew for 2 min and 46 s over an area in the Jezero crater known as Séítah that is difficult for Perseverance to reconnoiter because of its many dunes [3]. The flight taxed Ingenuity’s capabilities because its navigation algorithm operates as if the ground below is flat, and the copter had to cross a crater and other irregular terrain that could cause it to fly off course [10]. Ingenuity’s controllers sent instructions that allowed the helicopter to compensate—for example, it slowed as it entered the crater, which reduced its deviation from the flight path [10]. Photos captured by the copter will help the Perseverance team chart the rover’s course [3]. Ingenuity’s 233 m tenth flight on 24 July 2021 also aided Perseverance, photographing features known as the ‘‘Raised Ridges” that the rover may later visit [19].

Ingenuity represents a significant step because it ‘‘will give us the data and insight we need to build a bigger and better helicopter that will let us explore Mars for the next 100 years while supporting manned missions,” said Anubhav Datta, an associate professor of aerospace engineering at the University of Maryland in College Park, MD, USA. ‘‘Data from Ingenuity will help us correct, refine, and calibrate the design and simulation tools we can then use to build the next larger aircraft.” Datta is part of a team of engineers that is planning a 20 kg vehicle called the Mars Science Helicopter that would have six rotors and a payload of up to 5 kg [20].

With current technology, a 30 kg Mars helicopter is possible, and future craft could reach 50 kg, Datta said. These vehicles could not carry astronauts but could ferry tools and other small cargoes and investigate areas inaccessible to rovers, such as boulder fields and cliffs [1,17].

Some experts question whether engineering helicopters that can fly on Mars is worth the money. Rovers such as Perseverance and China’s Zhurong, which landed on Mars on 14 May 2021 [21], may facilitate exploration more cost effectively. They can carry more instruments than a helicopter, and their technology is proven. But by showing that Ingenuity can enhance Perseverance’s mission, NASA has made a strong case that helicopters can contribute to Mars exploration, said Rogerson. ‘‘The message here is that multicraft missions can really amplify your science,” he said.

Mars is not the only destination for helicopters. NASA is developing Dragonfly, an eight-bladed chopper intended to fly in the nitrogen-rich atmosphere of Saturn’s moon Titan, which could have the conditions necessary for life [22]. The mission will launch in 2027 and reach Titan in 2035. Because Titan’s atmosphere is four times denser than Earth’s, generating lift will not be the obstacle it is on Mars [22]. Ingenuity may be the first of many small helicopters to fly in the solar system, said Rogerson. ‘‘We are going to see drone technology move into space exploration.”