Frontiers of Structural and Civil Engineering 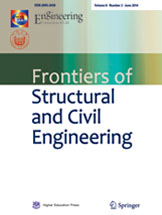 Liquefaction of sandy soils is a big threat to the stability and the safety of an earth embankment laid on saturated soils. A large number of liquefaction-induced damages on embankment due to different types of earthquakes have been reported worldwide. In this research, the dynamic behaviors of earth embankment and the reinforcement effects of grouting as remediation method, subjected to moderate earthquake EQ1 and strong earthquake EQ2, were numerically investigated. The seismic behaviors of ground composed of cohesionless sandy soil and cohesive clayey soil were uniformly described by the cyclic mobility (CM) model, which is capable of describing accurately the mechanical property of the soil due to monotonic and cyclic loadings by accounting for stress-induced anisotropy, over-consolidation, and soil structure. It is known from the numerical investigation that the embankment would experience destructive deformation, and that the collapse mode was closely related to the properties of input seismic motion because high intensities and long durations of an earthquake motion could lead to significant plastic deformation and prolonged soil liquefaction. Under the strong seismic loading of EQ2, a circular collapse surface, combined with huge settlement and lateral spread, occurred inside the liquefication zone and extended towards the embankment crest. In contrast, in moderate earthquake EQ1, upheaval was observed at each toe of the embankment, and instability occurred only in the liquefied ground. An anti-liquefaction remediation via grouting was determined to significantly reduce liquefaction-induced deformation (settlement, lateral spreading, and local uplift) and restrain the deep-seated circular sliding failure, even though the top sandy soil liquefied in both earthquakes. When the structure was subjected to EQ2 motion, local failure occurred on the embankment slope reinforced with grouting, and thus, an additional appropriate countermeasure should be implemented to further strengthen the slope. For both input motions, the surface deformation of the considered embankment decreased gradually as the thickness of reinforcement was increased, although the reinforcement effect was no longer significant once the thickness exceeded 6 m.