Ship manufacturing is a comprehensive industry providing technology and equipment for the shipping industry, marine development, and national defense construction. It has a leading role in the development and expansion of key industries such as steel, petrochemicals, textiles, equipment manufacturing, and electronic information. Moreover, it is an important factor in implementing a strategy for building a strong shipping industry within China. The strategic plan “Made in China 2025” has listed high-tech ships as one of the top ten areas targeted for significant development.

Traditional marine propulsion devices, such as diesel engines, steam turbines, and gas turbines, generally generate power through the consumption of diesel oil. However, there are a number of significant problems associated with this including low fuel energy conversion efficiency (~35%), reduced comfort due to high vibration and noise levels, and the production of a large quantity of greenhouse gases, nitrogen oxides, sulfur oxides, and particles. Furthermore, oil is a limited nonrenewable fossil fuel; studies have demonstrated that fossil fuels cannot support the sustainable development of human life [1–5]. Research focused on developing novel, clean, efficient, and sustainable energy propulsion technology for use in green ships has become important.

Developed countries such as the United States, Japan, and South Korea have successively promulgated a series of plans and standards to guide and support the development of hydrogen fuel cell use within the shipping industry. Details of these plans and standards are presented below.

The United States: The research and development of hydrogen energy began in 1973 during the oil crisis. At around the same time, the International Hydrogen Energy Association was established, and the first International Conference on this topic was held in Miami Beach, Florida. The United States Energy Research and Development Administration supported the hydrogen energy research program as a solution to the unsuccessful energy self-sufficiency program. In 2015, the United States Department of Energy submitted the 2015 Fuel Cell Technologies Market Report to Congress and vigorously invested in the development of advanced hydrogen fuel cell technology. In 2016, the United States Department of Energy reported that it was collaboratively developing industry specifications for marine hydrogen fuel cells and hydrogenation stations regarding environmental factors, safety, and licensing.

Japan: In 2009, the Ministry of Land, Infrastructure, Transport and Tourism formulated the Medium- and Long-Term Research Plan for the Shipbuilding Industry, which mentioned that fuel cells should be used as the electric propulsion system for ships to reduce emissions. Due to the advantages of Japan’s fuel cell technology, development rapidly occurred within the marine field. In 2017, the Japanese classification society ClassNK issued guidelines for the safe construction and operation of liquid hydrogen transport ships. These guidelines created the current maritime rules and regulations in the field of hydrogen fuel power.

Germany, the United States, Norway, Japan, and other developed countries, including those in the European Union, are leaders within the field of HFCTPDS. They have successfully demonstrated and applied hydrogen cell technology and are in the process of large-scale application. Demonstration projects of HFCTPDS within developed countries are listed in Table 1. 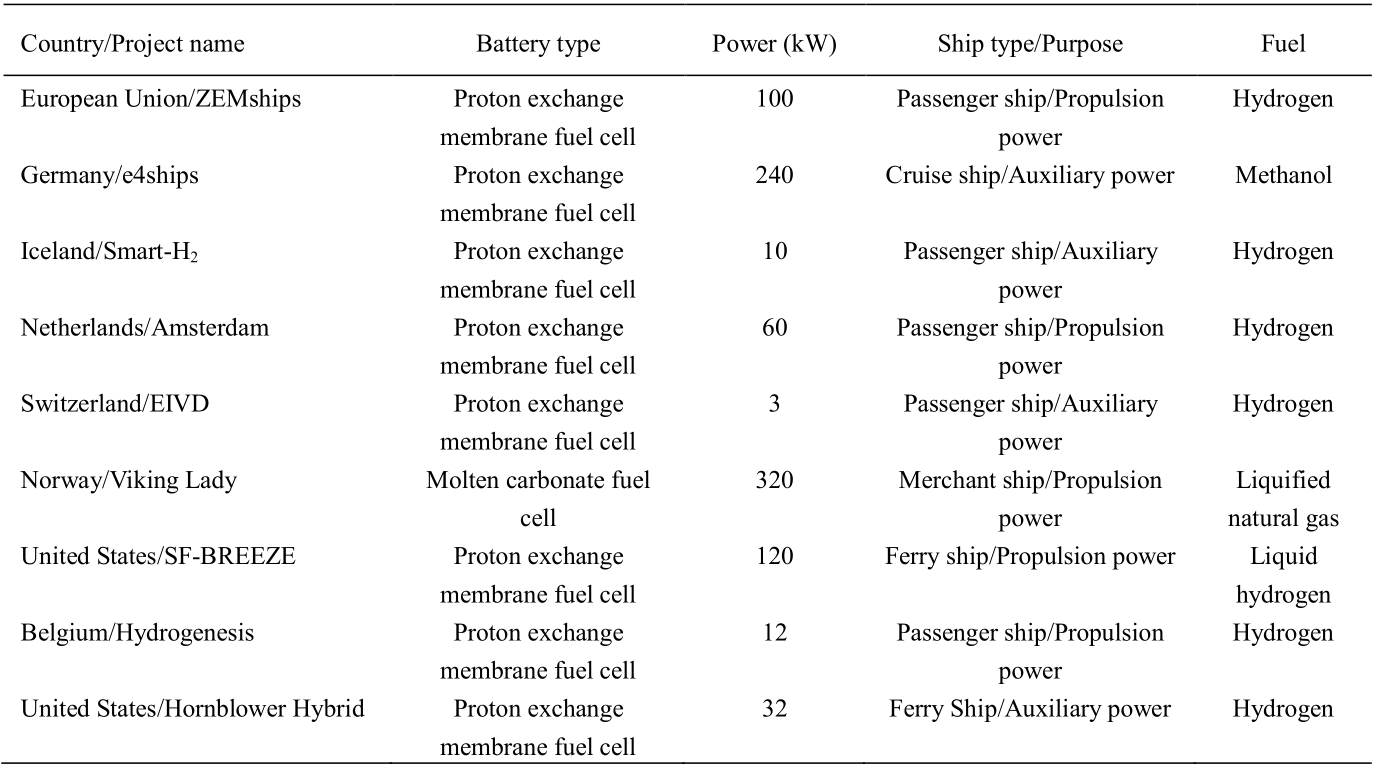 The European Union: In 2007, the European Union funded the world’s first Zero Emissions Ships (ZEMships) project for a commercial passenger ship. The 100-passenger capacity ship has a hybrid propulsion mode and integrates two hydrogen fuel cells with a peak power of 48 kW and 560 V lead-acid batteries.

Germany: In 2008, the 100-passenger capacity “Alsterwasser” hydrogen fuel cell cruise ship was developed. It uses a hydrogen fuel cell device as its main propulsion power. The ship can produce 100 kW of power and has a maximum speed of 14 km/h. Since its introduction, Alsterwasser has transported more than 14 000 passengers.

France: In 2017, the hydrogen–wind–sunlight-powered ship “Energy Observer” was built. The ship has a length and weight of 30 m and 20 t, respectively, and a hydrogen fuel cell system of 22 kW.

Netherlands: In 2009, a 100-passenger capacity “Fuel Cell Boat Amsterdam” was built for canal tourism in Amsterdam. The ship is equipped with a 60–70 kW hydrogen fuel cell system, which uses high-pressure hydrogen to provide fuel and can sail for 9 h at 7 kts.

United States: On June 25 2018, it was announced that the first hydrogen fuel cell ferry would be built in the Gulf region. The ferry carries 84 passengers and has a propulsion power, length, and maximum speed of 2×300 kW, 21 m, and 22 kts, respectively.

Japan: In 2015, the first hydrogen fuel cell fishing ship was launched for trial. The 12-passenger capacity ship has a length, fuel capacity, and maximum speed of 12.5 m, 450 L, and 37 km/h, respectively.

《3 Development status of HFCTPDS in China》

3 Development status of HFCTPDS in China

Within China, hydrogen fuel cell propulsion technology can be used as a propulsion power and auxiliary power source for cruise ships and yachts in rivers, lakes, and offshore areas. This would achieve energy conservation, emission reduction, green environmental protection, and improved ship comfort. Specifically, propulsion power and auxiliary power devices could be highly beneficial in research ships in order to reduce noise, vibrations, and exhaust emissions. Furthermore, hydrogen fuel cell auxiliary power devices could be applied to bulk cargo and passenger ships that frequently enter and leave ports. This would allow for greater environmental protection of the ports due to reduced emissions.

In recent years, the investment in hydrogen fuel cell technology and its supporting facilities has increased. SAIC, Datong, Yutong, and other well-known domestic automobile enterprises have successively launched various types of fuel cells to power vehicles. The Wuhan Institute of Marine Electric Propulsion has developed the 30 kW fuel cell engine as part of the new energy vehicle project of the Ministry of Science and Technology—“Research and Development of Fuel Cell Engine with Fast Dynamic Response.” Generally, the development and application of hydrogen fuel cell systems for land vehicles has a good technical foundation and investment environment. However, in contrast, the domestic research on hydrogen fuel cells for marine vehicles is at a very early stage.

Domestic research on propulsion technology for marine hydrogen fuel cells is mainly concentrated with the China Classification Society (CCS). In December 2017, the design and inspection requirements for fuel cell ships were specified in Part 2 of the CCS Guidelines for Ships Using Alternative Fuels.

The domestic engineering research on HFCTPDS is mainly concentrated within the Wuhan Institute of Marine Electric Propulsion. By undertaking national government research projects, the institute has performed impactful research and development of hydrogen fuel cell power systems in the field of ships and underwater equipment including hydrogen fuel cell stacks, hydrogen source technology, and energy management. The institute has made breakthroughs in system integration and other key technologies. Consequently, it is the research leader in the field of HFCTPDS in China and possesses a large base of technical knowledge within this area.

《4 Development ideas and suggestions for HFCTPDS》

4 Development ideas and suggestions for HFCTPDS

According to the requirements of Made in China 2025, for China to become a significant manufacturer of HFCTPDS, considerable attention must be given to several areas. These include focusing on the market demand and development trends of hydrogen fuel cell propulsion technology in the field of energy-saving, environment-friendly, safe, and efficient ship propulsion devices. These also include developing marine hydrogen fuel cells with independent intellectual property rights to promote technical engineering, improving policy guidance, and establishing key technologies. By addressing these considerations, China will be able to tackle key problems, apply green environmental protection technologies, achieve independent engineering of marine hydrogen fuel cell propulsion devices, accelerate the transformation of the ship industry, and meet market demand for high-performance green inland, offshore, and ocean ships.

4.2.2 Increase research on key technologies and improve the ability to independently innovate

It is important to increase the research investment of national and local governments, as well as to focus on the research of key technologies including the development of marine hydrogen fuel cell propulsion technology with high efficiency, high reliability, and long lifespans. Developing hydrogen fuel cell stack marine technology with high safety, hydrogen storage density, and storage and release reversibility is crucial. It is also necessary to create a convenient supply of marine hydrogen source technology that is highly compact with intelligently designed high-power hydrogen fuel cell system integration technology. Furthermore, to improve enterprise and innovation, the cooperation between industry, universities, and research institutes should be strengthened. This will promote independent innovation by utilizing industry’s superior technical resources and industrial chain resources in addition to creating a world leading team of researchers.

4.2.3 Perform a compliance study to establish regulations and codes for fuel cell ships

Guided by ecological priorities and green development, the gradual demonstration and promotion of fuel cell ships for inland river and offshore ocean environments will be achieved. During this demonstration process, the reliability, safety, and environmental adaptability of the fuel cell devices will be systematically assessed. Furthermore, the independently developed devices will be promoted and the construction of supporting facilities for hydrogen fuel storage and supply will be accelerated. This will result in a nationwide demonstration and assist in innovating the technology of marine hydrogen fuel cells to allow for rapid industrialization.

Focusing on the strategy and development goals of marine hydrogen fuel cell propulsion technology will create the potential for collaborations with relevant international institutions, organizations, and enterprises. Furthermore, it will promote bilateral or multilateral cooperation between governments. This method will allow us to generally improve the quality of international scientific and technological cooperation within the field. It will also enhance the scientific and technological innovation capacity and competitiveness of China’s marine hydrogen fuel cell propulsion plants.