As the central organelle in the eukaryotic secretory pathway, the endoplasmic reticulum (ER) mediates cellular processes that include calcium homeostasis and protein processing [1,2]. The infection of plants by pathogens can induce ER stress and trigger the unfolded protein response (UPR). The UPR is a conserved protective signaling pathway that leads to programmed cell death (PCD) under extreme conditions [3–5], which can harm or benefit pathogens, depending on the timing and mode of cell death, and on whether the pathogen has physiologically adapted to benefit from the dying tissue [6]. The biosynthesis and proper function of plant pattern recognition receptors (PRRs), which perceive pathogen- or microbe-associated molecular patterns (PAMPs or MAMPs) at the cell surface, also rely on N-glycosylation and the ER quality-control (ERQC) system [7–9]. However, pathogens have evolved the capacity utilizing effectors to bind to the host ER stress pathway and manipulate it to their advantage during infection. Recent studies have highlighted the ER stress response as a key target for pathogens that allows them to control ER stress-mediated plant immunity. In response to pathogen infections, the plant ER network undergoes extensive rearrangements. Plant ER sensors and several ER-resident proteins are associated with plant defense, and some of them are hijacked by pathogen effectors to manipulate the ER stress pathways or plant defense responses in order to achieve compatibility and promote infection (Table 1) [9–28]. Understanding these processes will facilitate studies on the role of the ER in plant–pathogen interactions and on the molecular mechanisms used by pathogens to hijack and overcome host ER stress. It will also provide a novel potential control strategy against pathogens in the form of activating ER stress-mediated plant immunity. Here, we outline the current understanding of the mechanisms underlying plant–pathogen molecular interactions that involve the host ER.

Table 1 The roles of plant ER-associated proteins in response to pathogen infection.

Binding immunoglobulin protein (BiP) belongs to the heatshock 70 kDa protein (HSP70) family, and are a major chaperone in the ER lumen. BiP is involved in regulating the UPR pathway by binding to ER stress sensors and mitigating ER stress by sequestering misfolded proteins [29,30]. BiP that can be induced by both abiotic and biotic stresses are associated with ER stress, PCD, and plant defense responses. For example, NbBiP4 overexpression in Nicotiana benthamiana was able to eliminate TGBp3 from Potato virus X (PVX)-induced PCD, which is consistent with a protective role for NbBiP4 [13]. Reducing the accumulation of BiP in the ER by silencing NbERD2 in Nicotiana benthamiana resulted in increased sensitivity to ER stress and exacerbation of PCD induced by nonhost pathogens [31]. Overexpression of soybean GmBiP1–4 and Nicotiana benthamiana NbBiP5 led to an increased susceptibility to Phytophthora infection and Bax-triggered cell death [16], suggesting that the increased accumulation of BiP promotes infection by suppressing infection-associated ER stress-induced PCD (ERPCD). The first report of a plant pathogen utilizing effectors to manipulate host ER stress and promote infection involved the effectors PsAvh262 in Phytophthora sojae [16]. As hemibiotrophic pathogens, members of the Phytophthora genus initially establish a biotrophic relationship with their hosts, and then kill host cells in the later stages of the infection. During the initial biotrophic phase, Phytophthora pathogens utilize their haustoria and viable host tissues for nutrition, so they need efficient mechanisms for suppressing or evading host defenses in general and PCD in particular [32]. To achieve this, Phytophthora delivers PsAvh262 into host cells; this effector stabilizes BiP using its immunoglobulin/albumin-binding domain. Preventing BiP degradation by an MG132- sensitive mechanism in the ER results in the suppression of ERPCD. PsAvh262-silenced Phytophthora sojae does not induce BiP, resulting in enhanced PCD symptoms in soybean. In addition, overexpression of BiP can partially restore host susceptibility to PsAvh262-silenced Phytophthora sojae, illustrating that PsAvh262 promotes infection by attenuating infection-associated ER-PCD (Fig. 1). Several toxins and type IV secretion system (T4SS) effectors from mammalian pathogenic bacteria have been implicated in the activation of the UPR and subsequent inflammation by binding to BiP [33]. However, it is unclear whether PsAvh262 is involved in the regulation of the UPR. Ectopic expression of BiP in both soybean and Nicotiana benthamiana enhances susceptibility to Phytophthora infection, suggesting that BiP negatively regulates plant defense responses [16]. PsAvh262 also interacts with rice OsBiP3, and OsBiP3-overexpression significantly decreases XA21 accumulation, compromising XA21-mediated resistance to Xanthomonas oryzae pv. oryzae (Xoo) [17]. In addition, PsAvh262 can suppress pathogen associated molecular pattern (PAMP)-triggered cell death, which implies that the accumulation of BiP mediated by PsAvh262 might destabilize receptors, or that the PsAvh262–BiP interaction might block SDF2/ERdi3B/BiP complex-assisted folding of the receptors, resulting in compromised downstream defense responses. 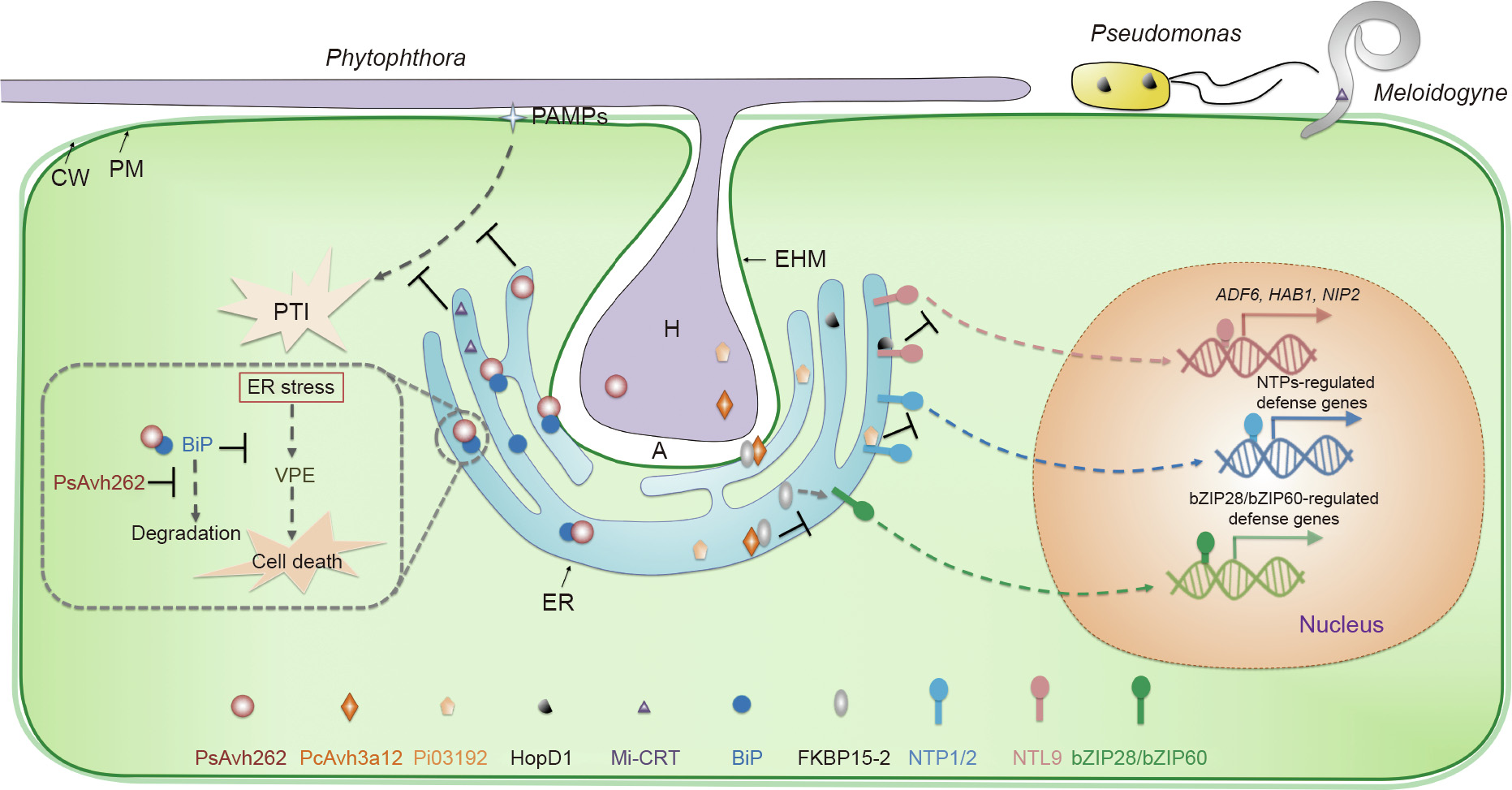 As one of the largest families of transcriptional regulators, NAC (where NAC stands for NAM, ATAF1/2, and CUC2) transcription factors (TFs) are specific to plants and play important roles in regulating the transcriptional reprogramming associated with stress responses [34,35]. Numerous NAC TFs function in plant defense responses by modulating reactive oxygen species (ROS) signaling pathways, phytohormonal pathways, ER stress, PCD, and the expression of defense-related genes [36,37]. ER-resident NAC TFs that play important roles in plant responses to ER stress and pathogens have been identified. It was demonstrated that a NAC from the Transmembrane Motif 1 (NTM1)-like family of TFs 9 (NTL9) regulates the salicylic acid (SA) synthesis gene isochorismate synthase 1 (ICS1 ) [38] and plays a role in the innate immune response to Pseudomonas syringae by regulating defense-related gene expression in effector-triggered immunity (ETI) [22]. In addition, StNTP1 and StNTP2 (where NTP refers to NAC targeted by Phytophthora ) in potato may be released from the ER and transported to the nucleus to stimulate Phytophthora resistance. However, little is known about the downstream genes regulated by NTPs and whether NTL9 or NTPs are involved in regulating downstream genes involved in ER stress.

Recent work has demonstrated that effectors from a variety of pathogens, including Pseudomonas syringae, Hyaloperonospora arabidopsidis (Hpa ), and Phytophthora infestans, can interact with ER-resident NAC TFs in the ER and suppress plant defense responses. For example, the Pseudomonas syringae type III effector HopD1 and the Hpa RxLR effectors can target AtNTL9 [22], and the Phytophthora infestans RxLR effector Pix03192 targets StNTP1 and StNTP2 [23]. The type III effector HopD1 acts as a strong suppressor of ETI and enhances the growth of ETI-inducing Pseudomonas syringae strains. AtNTL9 positively regulates plant defenses against Pseudomonas syringae, and HopD1 can suppress AtNTL9-regulated ETI genes (Fig. 1). StNTPs are released from the ER membrane and migrate to the nucleus, where they are rapidly turned over by the 26S proteasome. However, this PAMP-triggered relocalization can be prevented by Pi03192, indicating that Phytophthora infestans utilizes effectors to prevent NTPs from translocating to the nucleus. Therefore, Pi03192 may compromise the stimulation of NTP-regulated defense genes by preventing NTP transport to the nucleus (Fig. 1). However, HopD1 does not appear to affect the subcellular localization of NTL9, and it is currently unclear how HopD1 inhibits NTL9-dependent gene expression. The function of NTPs in the plant cell nucleus and whether NTPs and NTL9 are involved in ER stress-associated defense responses also remain unconfirmed.

Peptidyl-prolyl cis–trans isomerases (PPIases) catalyze the cistrans isomerization of proline peptide bonds, which is a rate-limiting step in the process of protein folding [39]. There are three PPIase subfamilies in plants: cyclophilins (CYPs), FK506-binding proteins (FKBPs), and parvulins [39]. PPIase proteins have been studied widely in plant–pathogen interaction, particularly in CYPs. It has been found that AtFKBP65 associates with plant defense responses to invasion by Pseudomonas syringae and Xanthomonas campestris [40,41]. Recently, the role of ER-localized AtFKBP15-2 in plant–pathogen interaction was studied in detail [25], providing a further indication of crosstalk between ER stress and plant immunity. It was found that AtFKBP15-2 contributes to the sensing of tunicamycin (TM)-induced ER stress, transcription of the ER stress sensors, and subsequent regulation of UPR pathways upon ER stress and Phytophthora parasitica infection, and thus positively regulates the ER stress-mediated plant immunity.

Interestingly, the plant CYPs ROC1 and GmCYP1, which are recruited by pathogens, function as “helpers” in the activation of pathogen effector proteins through PPIase activity, which causes the proteins to become active virulence proteins in order to achieve successful infection in plant cells [42,43]. Recent findings show that PcAvr3a12, a Phytophthora capsici RxLR effector and a member of the Avr3a effector family, suppresses AtFKBP15-2- mediated plant immunity by inhibiting PPIase activity [25]. PcAvr3a12 takes a different approach to manipulate host defense responses by suppressing the ER stress-mediated plant immunity. It is upregulated during the early stages of infection, and functions as a virulence factor that enhances the susceptibility of Arabidopsis thaliana to Phytophthora capsici infection. PcAvr3a12 specifically binds to AtFKBP15-2, rather than to AtFKBP15-1. In the presence of the effector PcAvr3a12, the PPIase activity of FKBP15-2, which is essential for its contribution to immunity, is suppressed by binding to PcAvr3a12. These data indicate that PcAvr3a12 manipulates the host ER homeostasis and ER stress-mediated plant immunity by blocking the PPIase activity of FKBP15-2 (Fig. 1). Future studies of Phytophthora capsici strains in the absence of PcAvr3a12 may further confirm whether this effector directly disturbs the host UPR and ER stress.

《5. Secreting calreticulin into the host to suppress host defenses》

5. Secreting calreticulin into the host to suppress host defenses

Calreticulin (CRT) is a highly-conserved calcium-binding molecular chaperone and Ca2+ sensor found in the ER lumen. It is involved in Ca2+ homeostasis and is indirectly involved in protein folding in plants [44]. CRTs are involved in plant immune responses and in plant responses to a variety of strqess factors (Table 1). CRT3 has an important function in the accumulation of the membrane-localized receptors EFR, BRI1, and IRK [7–9,45]. The Arabidopsis crt3 null mutant was shown to have an increased susceptibility to Pst DC3000 [9]. However, overexpressing CRT2 led to constitutive SA accumulation and to the activation of pathogenesis-related (PR) genes, in addition to increasing susceptibility to Pst DC3000 infection [19]. It has been reported that root-knot nematodes (RKNs) Meloidogyne incognita secrete a CRT (Mi-CRT) into plant tissues using a stylet, and that this Mi-CRT then accumulates at the cell wall of giant cells [46]. The Mi-CRT also associates with the ER and Golgi in plants [47]. Several animal parasites also secrete CRT into their hosts during infection, and the CRTs secreted by Trypanosoma spp. and animal-parasitic nematodes play a role in modulating host defenses [48–50]. Knockdown of Mi-CRT in RKN resulted in reduced virulence of nematodes infecting tomato and Arabidopsis thaliana, highlighting the importance of Mi-CRT for successful infection [47]. Overexpression of Mi-CRT in plants increased susceptibility not only to Meloidogyne incognita, but also to the hemibiotrophic pathogen Phytophthora parasitica, and MiCRT directly influenced infection success by suppressing PAMPtriggered immunity (PTI) and hormone-mediated defenses [47]. This study provides an example of pathogens mimicking the host ER pathway and secreting an ER molecular chaperone-like protein to suppress host defense. It is not clearly known how Mi-CRT suppresses defense responses; however, Mi-CRT might be secreted into plants to alleviate ER stress.

Despite recent advances elucidating plant–pathogen interactions, the role played by the ER in these interactions is not well understood, and many questions remain: How do host plants recognize ER stress signals and regulate ER stress–mediated immunity? How is crosstalk between autophagy and ER-PCD in plant–pathogen interactions accomplished? What is the role of ER-resident NAC TFs and ERQC components in ER stress-pathogen interactions? How do pathogens deliver effectors into the host ER network and regulate the host UPR to promote infection? What roles do effectors play in these processes? Further studies are needed to resolve these issues and to provide more examples of the interaction between plant ER stress and pathogens. Understanding the recognition of the pathogen-induced ER stress signal by the host and how pathogens break through the ER stress-mediated plant immunity to promote successful colonization in hosts is crucial for developing effective control strategies in crop improvement. Strategies that involve activating the ER stress-mediated plant immunity, such as effector-based modulation of the host targets or chemical manipulation of host ER stress signaling, may provide a new direction for green plant protection engineering, but we have a long way to run to win this race.